What Are Hybrid Oaks? 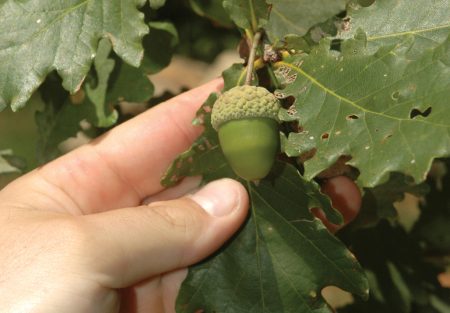 In fall 2005, QDMA received a house-warming gift for our newly constructed National Headquarters in Georgia – four containerized hybrid oak seedlings from Charlie Morse of Morse Nurseries in Michigan. Charlie admitted he wasn’t sure how these trees would fare in the heat of the South, far from their native grounds, but that was part of his reason for sending them – an experiment of sorts.

What are hybrid oaks? Oaks are known to naturally hybridize by pollinating across species, producing fertile offspring with characteristics of both parents. White oaks are especially prone to hybridize with other members of the white oak family. Experts have noted that some offspring exhibit “hybrid vigor,” which means a faster-growing tree. Some observers say they have also noted heavier acorn crops, larger acorns, earlier acorn production, or combinations of these attributes. Experts study the physical characteristics of hybrids to try to determine the parent species, but sometimes this is an educated guess. Charlie sent QDMA two “bodacious bur” oaks (thought to be a cross between bur oak and swamp white oak), a burgambels oak (bur x gambels), and a sergeant oak (English x white). Sprouted by Charlie from acorns in spring 2005, they were planted in winter 2006.

Spring 2009, the third growing season since planting, brought a surprise – tiny acorns on two of the trees. A bodacious bur bore two acorns, which were since aborted during a summer dry spell (a common survival strategy among oaks). The sergeant oak, meanwhile, bore 15 immature acorns; nine were aborted, leaving six to mature. Hearing the report, Charlie was pleased with the progress of his experiment. Even in Michigan, it is uncommon for 4-year-old hybrids to bear acorns, he said. Acorns at six years is typical. He speculates that Georgia’s significantly longer growing season is playing a role. Since 2009, the trees have continued to bear acorns each year.