I Bought Deer Hunting Land in a CWD Zone. It Was a Good Decision. 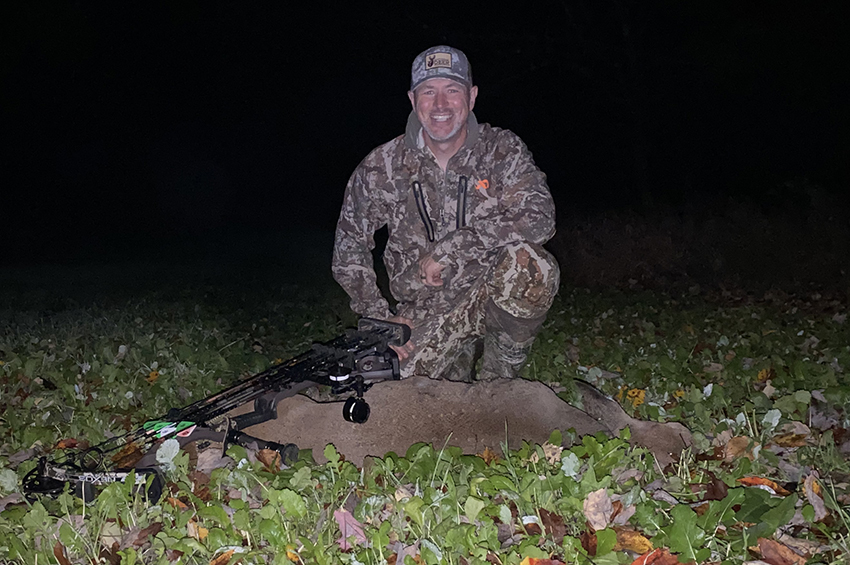 When I heard the news that a new chronic wasting disease (CWD) Disease Management Area was being established near the area I grew up hunting as a kid in Pennsylvania, I got an immediate knot in my stomach. In my mind, CWD was something happening in other places, and even though I was aware of and educated about the disease, it didn’t become real to me until the May 2014 news release hit. When I finally saw a map, I breathed a slight sight of relief as the land I typically hunted fell a few miles outside the DMA. Still, it was too close for comfort, and it got the local hunters stirring. I heard everything from, “That’s it, I’m done deer hunting,” to “It’s just a ploy by the government and insurance companies that want rid of the deer.” There really wasn’t much in-between.

As the years passed and hunters in the DMA became more accustomed to living with it, the rhetoric and confusion has faded. Most hunters are voluntarily having their deer tested at no cost to them by depositing heads in the state’s sample collection dumpsters, and other than one small expansion of the DMA since 2014, reports of additional deer testing positive have been few and far between. Still, all of this seemed to me like something happening on the other side of the track, because I wasn’t hunting in the DMA. That changed in late 2021 in an unexpected way.

As a frustrating hunting season was coming to an end, I decided it was time to investigate buying my own hunting land. I can’t say I was a serious buyer initially, but I did spend some time looking at the listings and eventually decided to go visit one. One of my criteria was any land I would buy be outside of a DMA and this property checked that box while also looking pretty good on paper. Upon inspection it turned out to be a nice property, but the price was inflated, and I had just begun my search. I ended up walking it twice and took my friend Mike along for a second opinion, but I still wasn’t motivated to make an offer.

Going into my second year, I see no reason to fear hunting deer or owning land in a DMA, and I would even look at it as an opportunity as opposed to an obstacle.

On a whim, I scrolled a few listings on my phone before leaving and spotted one that wasn’t far away and was priced lower than the other property with the added benefit of being several more acres. Looking at the map I knew it was in the DMA, but I figured it wouldn’t hurt to look anyway. I contacted the realtor ahead of time to make sure it was okay to walk it. The description in the listing was vague, and I had no idea what I was going to see when I got there. I expected to be underwhelmed because I learned it had been on the market for more than a year, and even the realty sign on the side of the road was partially obscured by vegetation. I opened my onX Hunt app and was on my way. Within minutes I knew the property appealed to me more than the first one, and the farther I walked, the more I liked it. There were plenty of edges and openings, several water sources including a sizable creek that served as the eastern property line, the hills were rolling and manageable, and it adjoined more than 3,000 acres of State Game Land. It wasn’t without its problems as I came across several trash dump sites and abused access roads, but with a little effort and love I felt like it could be an excellent property. A fixer-upper, if you will.

Sometime during my daydreaming, I remembered I was standing in the middle of a CWD management zone. I couldn’t deny my excitement for the land, though, and despite the challenges of dealing with CWD-related regulations, the total package was just too much to walk away from. After some modest negotiating, I closed on the property within a couple weeks and immediately set out to make it my own.

The rules for hunting and handling deer in the DMA are less daunting than I assumed. The biggest challenge I face is how I must handle a deer after harvest. I live a little more than a half-hour from my land, and my home is not in the DMA. That means I can’t simply load up a whole deer carcass and take it home for processing as I normally might, as transporting and improperly disposing of CWD-infected deer carcasses is one of the most likely ways of spreading CWD into new areas. My options are to take it to a processor within the DMA or break the deer down to parts that are allowed to leave the DMA with me, which include everything but the head and spinal cord. As luck would have it, there is a meat processor within a few miles should I choose to have my deer professionally butchered. To solve the problem of being able to process my deer at home, I set up an inexpensive tripod that I can hang my deer from and quickly break it down to the allowable parts. I can then bury potentially infectious parts on my land, which is an encouraged method of disposal. 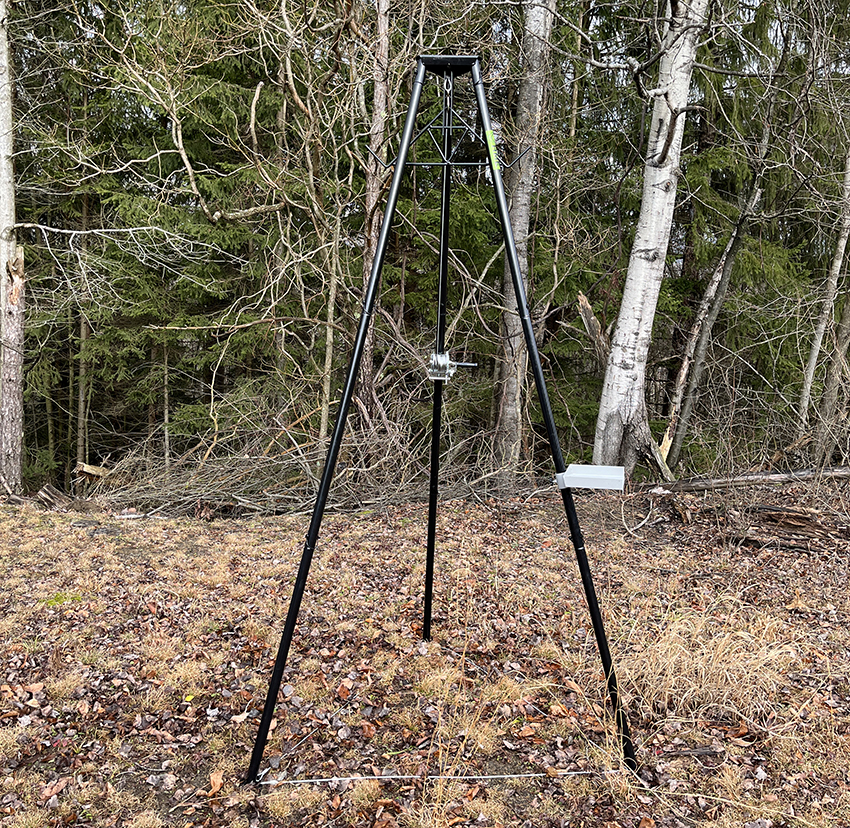 Nick bought an inexpensive tri-pod meat pole for hanging and processing deer on his small hunting property, since regulations prohibit transportation of whole deer carcasses outside of the CWD zone.

Because I’m hunting in a DMA, the Pennsylvania Game Commission provides drop-boxes within easy driving range where heads can be deposited for testing. I submitted all three of the deer I shot there last year for sampling, and all results came back as “CWD Not Detected.” Because one of the deer was a buck, I removed the antlers and cleaned the skull plate per my state wildlife agency’s specifications and deposited the rest of the head in a drop-box for testing. If I had chosen to have the deer mounted, I would have had the head fully caped and removed the antlers before submitting it.

There are a few other special rules that I must observe in the DMA. I am unable to use or possess urine-based attractants while hunting. I’m also not allowed to feed deer, and in addition, Pennsylvania does not allow baiting deer. This regulation only poses a challenge to me if I want to conduct a baited trail-camera survey of the deer population. If I want to do a survey, I’ll have to use alternative methods. If you live in a state that allows baiting, and you’re hunting in a DMA, chances are baiting is prohibited there. While state wildlife agencies largely agree on the best management approaches to slow the spread of CWD, the rules aren’t the same everywhere, so please be sure to check the regulations of the state you’ll be hunting in. 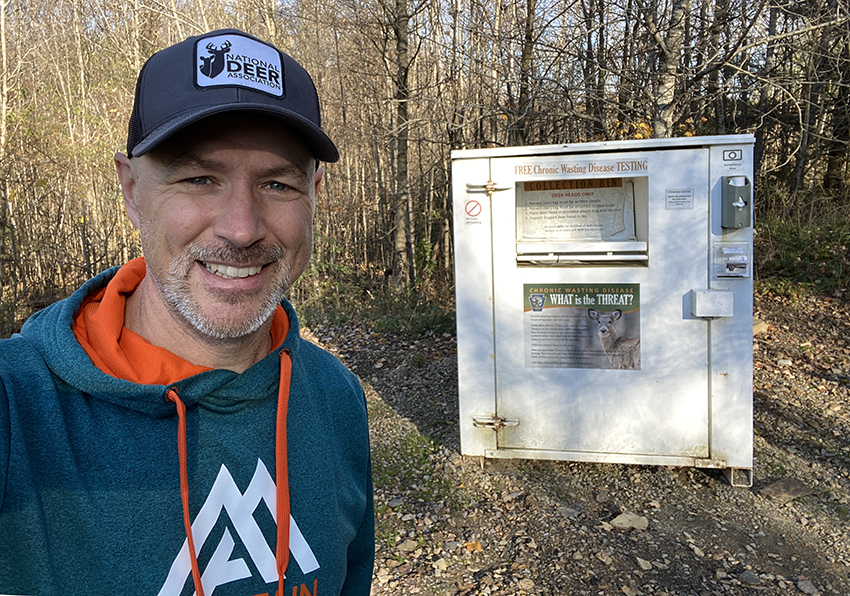 Nick submitted the heads of three deer he killed in 2021 at this PGC dropbox in the zone. All three deer tested negative for CWD. This testing is free.

Going into my second year of landownership and hunting in a DMA, I’m happy to report that buying it was a great decision, and I’m glad I didn’t let the minimal extra requirements become a roadblock. I quickly learned that the inconveniences are more daunting on paper than in reality, and I also know that actively following the special regulations and submitting my harvested deer for testing is doing my part to help manage the disease in the state. In addition, I’ve gotten great satisfaction from improving the land through habitat management, which will benefit deer and other wildlife. Considering my profession and my experience with CWD as a national issue, maybe I was meant to hunt and own land in a CWD zone. It’s a great opportunity for me to help educate other hunters by sharing my own experiences. I see no reason to fear hunting deer or owning land in a DMA, and I would even look at it as an opportunity as opposed to an obstacle.

While CWD continues to be the most significant threat to deer and deer hunting in more than a century, there has been progress. As any credible scientist working on CWD will tell you, we shouldn’t expect a cure anytime soon if at all. Yet we continue to learn more about the disease and progress is being made by wildlife managers and researchers. State wildlife management agencies are more prepared, and the information they’re providing is aptly aimed at how we can live with the disease as opposed to an “end of the world” message. This has led to a more informed and educated deer-hunting community, and for those who want to listen and be part of the solution, a clear and mostly consistent set of steps that can be taken to slow the spread of CWD have been outlined. The more participation by hunters and state wildlife agencies, the more progress we make.

View all Articles By Nick Pinizzotto