If You Pass a Mature Buck, Will He Grow Bigger Antlers? 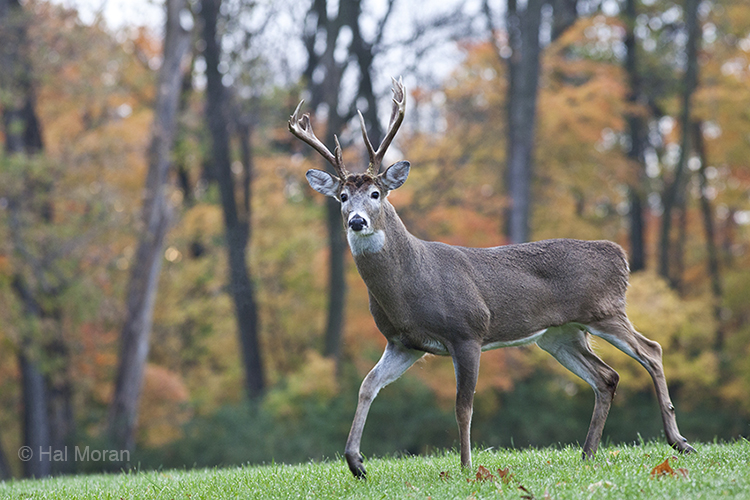 You’ve got a 5½-year-old buck standing broadside in your sights, and he’s yours to take home with you if you want him. He’s heavy-bodied, fully mature and carries a large rack of antlers. But as you prepare to pull the trigger, a question enters your mind: Will he grow larger antlers next year?

Perhaps your reaction to this scenario is: “What, are you crazy? That buck is so dead. I’d never pass up a shot at a mature buck just for a few more inches of antler.”

But before you post a hot take in the comments section, consider that this is a legitimate question born out of curiosity, and there’s nothing wrong with asking it. With national rates of yearling-buck harvest lower than any time in American history, today’s hunters are encountering and killing more bucks of advanced ages than ever before. It’s a natural progression to wonder about a buck’s golden years, and I am regularly asked by curious hunters: What are the chances an older buck will continue to grow larger antlers each year?

There’s some good science on that question. We know from a lot of data that the average buck reaches 99% of his lifetime antler size potential at 5½. But that’s the average buck, and there are always exceptions to the average.

Antlers of the Ancients

In a 2015 article for Quality Whitetails magazine, Dr. Dave Hewitt of the Caesar Kleberg Wildlife Research Institute at Texas A&M-Kingsville reviewed data from 170 wild bucks captured in at least two different years while they were 5½ years of age or older. There were 211 instances in which antler size was measured in consecutive years (some of these mature bucks were captured more than twice). The chart below shows the results. 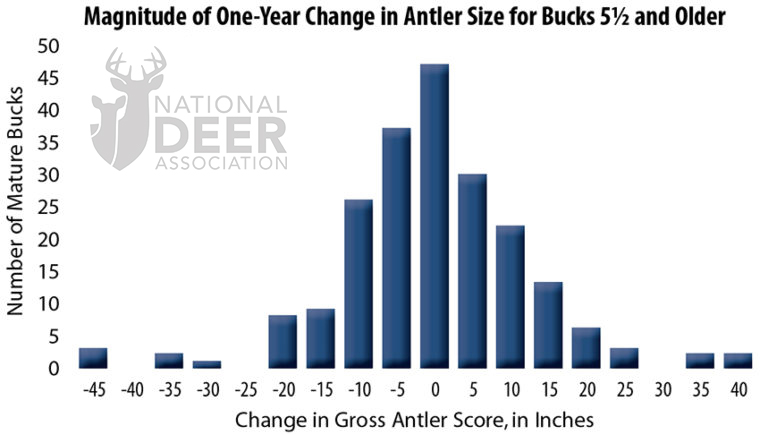 An extreme example from Dave Hewitt’s study: This buck grossed 210 inches when first captured at 5½ (far left). He dropped 44 inches to 166 the next year (center). Found dead shortly after growing a new set of antlers at 7½, he had climbed back to 208! Note that this buck was well above the average for his age, which is around 130 inches gross in the study area.

Notice in the chart that this change goes both ways. A rare mature buck might jump or decline by this much in a single year. Why? As Dave pointed out in his article, disease or injury could easily lead to declines in antler size, and recovery could lead to a rebound. Major shifts in habitat quality and nutrition from one year to the next, like a drought or acorn failure, could also contribute.

So, there’s about an equal chance that the 5½-year-old buck in your sights will gain or lose a few inches, and maybe a lot more than a few. It’s a coin flip. But the older the buck, the greater chance the inches will be subtracted.

Hold on just a minute!

Is it really a coin flip? Our original question makes a big assumption: If you pass that 5½-year-old buck, you’ll see him at 6½. Let’s look at death rates for these older bucks.

Henry Chidgey of Texas, now retired, is the founder of DeerAge.com, a lab that ages deer by analyzing cementum annuli rings found in incisor teeth. I asked Henry about the oldest doe and buck he ever aged. He recalled a 17½-year-old doe from Pennsylvania and a 9½-year-old buck from Illinois. Note that the doe was nearly twice as old as the buck. Heather Stevens is the new owner of DeerAge.com, and she checked the complete, updated records for me. She found an Indiana doe aged at 22½ years and a Texas buck aged at 15½. Again, the oldest doe lived seven years longer than the oldest buck.

Your calculations about passing that 5½-year-old need to consider not only the odds of larger antlers but the odds the buck will live long enough to grow them.

Mortality studies of bucks show a U-shaped curve when plotted on a graph by age. Death rates are high among fawns and yearling bucks, dip lowest at age 3½ and 4½, then climb again as you get into older age classes, forming a “U.” A Texas tracking study of 86 adult bucks found 15 to 20% mortality rates in each age class from 5½ to 9½, and none of the bucks lived beyond 10½ years. Does, on the other hand, had a wider “U” as more of them lived beyond that age.

Simply put, bucks live harder lives than does. They run the annual gauntlet of legal hunting and year-round poaching, plus predators. They also face biological risks that does don’t. During the rut they travel widely, eat little, fight other bucks, and exert themselves to the point of significant weight loss in a short period of time. Rut-related excursions may take them out of their home ranges onto unfamiliar ground and across roads, rivers and other dangerous obstacles. Injuries claim many of them, and exhaustion makes them more susceptible to disease and winter weather. Even the cycle of antler growth carries unique risks, like brain abscesses.

My point is, your calculations about passing that 5½-year-old need to consider not only the odds of larger antlers but the odds the buck will live long enough to grow them, much less appear in your sights next year.

Considering all this, no calculations are necessary if it’s me drawing a bead on a 5½-year-old buck. I mean, are you crazy? That buck is so dead. I’d never pass up a shot at a mature buck just for a few more inches of antler.