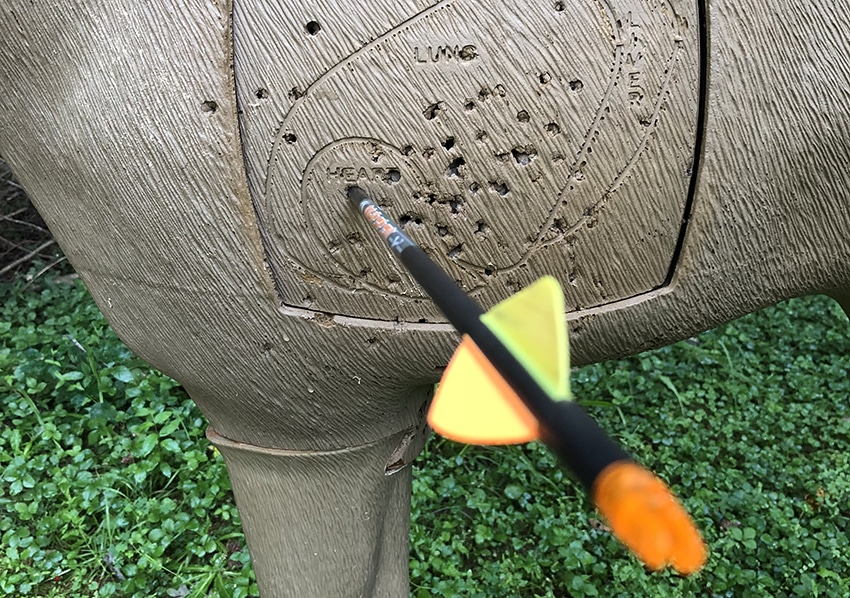 As a young hunter, I often puzzled over the depictions of the chest cavity in diagrams for hunters and on targets that displayed organs, because they were often at odds with my understanding of deer anatomy. The discrepancies I noted most often were the size and position of the lungs and location of the backbone.

Editor’s Note: Photos of the internal organs and anatomy of a legally harvested feral hog follow below. You’ve been warned.

When European hunters first began hunting African game and writing of their hunts, the majority of them stressed the importance of laying a specimen of each kind of animal on its side and removing the skin and ribs, allowing the hunter a detailed study of the inner anatomy. This was good advice, but I had already hunted deer successfully for years, and plus, when hunting far back in the woods, field-dressing harvested animals where they fell diminished the weight of the carcass, making the task of carrying it out easier. For deer that fell within reach of a vehicle, most were gutted at camp so the animal could be hung and aged. Either way, the innards were removed with no study of their exact location.

One day, however, I was motivated to make a careful dissection. Feral hogs don’t differ too much from deer inside the ribs, and they are legal year round in my home state of Florida. My first few hunts turned up no hogs, but then one morning I found a good boar trotting through some dog fennel. I was able to run ahead, placing myself on his course and, after my shot, he made it only 50 yards. I skinned one side and removed the shoulder. The books I read suggested using a hatchet to cut the ribs along the spine. If you feel compelled to perform this dissection on your own, take my advice: skip the hatchet and save being splattered with lots of blood and gore. My arms were coated, and I couldn’t see through my glasses!

The thing that amazed me was that once the section of ribs was removed, the lungs looked exactly like the diagrams I had always seen! The creators of the diagrams had actually taken the trouble to dissect an animal and sketch what showed! What they failed to recognize was that, with the introduction of air into the chest cavity, the vacuum that held the lungs inflated was ruptured and the lungs collapsed to a size much smaller than they typically fill, in fact probably one third or less their normal size.

Afterward, of course, I thought about how nice photos would have been, and this notion sent me on another hog hunt three weeks later. I did eventually find a boar, not as big, but about a hundred or more pounds. I utilized loppers to sever the ribs along the backbone. The process was easy and not at all messy. The collapsed lung didn’t lie quite so textbook-like this time, the lobes twisting in a peculiar manner, but the same anatomy was apparent. I took photographs, shown and labeled below, and I feel deer hunters can learn a bit from them.

Here are what I feel to be the most important points the photographs demonstrate to a hunter thinking about shot placement.

The leg bone (humerus) angles sharply forward where the leg meets the bottom of the chest, so a projectile aimed one-third of the way from the bottom to the top of the chest directly over the portion of the leg that shows below it should hit the heart and/or the big vessels attached to it. This, in fact, is the aiming technique recommended by QDMA in this video.

The spine is not flat from the tail to the neck of a deer. As the spine nears the animal’s neck, it drops quite low toward the front of the chest. The vertebral “fins” rising off the top of the spine become longer above it, which makes it appear to a hunter as is if the line of the back is straight. Actually, it is possible to shoot over the spine in this region without hitting anything vital. Personally, I think this is the biggest factor contributing to the “dead space” myth – more on that below.

The lungs extend as far back as the attachment of the diaphragm to the ribs, giving the hunter several inches back from the shoulder where a projectile can hit and still puncture both longs. However, the paunch extends forward to the attachment of the diaphragm, so a shot at the rear of the chest impacts thinner portions of the lungs and also involves the stomach. A shot in this region of the lungs may not be as quickly lethal. At the same time, stomach contents on an arrow does not necessarily mean the lungs were missed.

Most hunters have heard tales of perfect chest shots that not only did not result in good blood trails and downed deer but allow reports of the deer surviving to be seen again. It was hard for me to fathom a deer surviving a wound where a bullet or arrow passed through the chest, below the backbone and above the sternum, thereby passing through both lungs. Obviously, there are exceptions to nearly everything, but the chances are far too scant to fuel a heavily repeated myth.

Next time you are field-dressing a deer, look inside the rib cage and note that the spinal column actually projects downward a little into the chest cavity. The lungs fill the space on either side of the spine, so the tops of the lungs actually rise a little higher than the spine. There simply is no empty space below the spine and above the lungs where an arrow or bullet can pass through without hitting lungs.

Then, the thought struck me that I might have been wrong all along. The lungs have lobes. Could an arrowhead slip between two lobes of the lungs, inflicting only minor damage to each lobe and then pass through the same gap on the opposite side of the chest?

My dissection of the hog answered this question. While the lung was composed of lobes, I discovered that they ran obliquely, so a broad side shot would actually penetrate both lobes. If an arrow happened to be directed quartering forward, it could slip between lobes, damaging each one minimally, but would not at all be in line to do the same on the opposite side. The far lung would suffer a full cut. I studied all possible angles, but my investigation definitively rebutted my new thought. No projectile could pass between lobes with only minimal damage.

The dissection only strengthened my belief that an arrow or bullet cannot pass through both lungs without causing the death of an animal. Perhaps at the very bottom of the chest, where the lungs are quite thin, it could happen. Cases have been reported of deer with substantial injuries to one lung surviving, but so far, I have never heard of one surviving a double-lung shot.

I am now more convinced that an arrow passing through both lungs should result in a dead deer. Use what I’ve learned and shared here to help ensure more effective, ethical and lethal shots on deer this season.

About the Author: Dr. Tim Lewis earned degrees in zoology and dental medicine and is the author of the new book, Tales of Trails, a comprehensive guide to blood-trailing and recovering deer. He is also the author of the book Bows, Swamps, Whitetails. His bowhunting addiction dates back nearly 60 years.