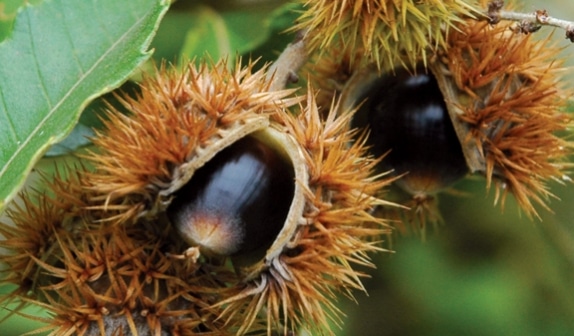 If you’re interested in planting something on your property that can quickly provide mast, attract deer and provide groundcover at the same time, it’s time to consider an alternative to the standard oak tree plantings.

A relative of the American chestnut, Allegheny chinkapin is a tall, native, deciduous, nut-producing shrub that can be found growing from New Jersey and Pennsylvania, south to Florida, and west to eastern Texas and Oklahoma, and southern Ohio. In fact, the two are closely enough related that Allegheny chinkapins are susceptible to chestnut blight. Reports vary on the shrub’s resistance, but the disease has been blamed for the near disappearance of Allegheny chinkapin from most of Alabama, and as having severely reduced populations in the Ozarks and Texas. This is unfortunate, because the threat of infection has deterred its use by many land managers, even though its fruit is known to be more attractive and sweeter than most acorns. Allegheny chinkapin’s adaptability to harsh conditions also makes it a good species to rehabilitate disturbed sites. What’s more, blight-stricken plantings display 60 to 80 percent survival, and those that come back typically sprout more in the form of a shrub than a tree – which is great for deer and turkeys.

Although admittedly somewhat rare in its native range, Allegheny chinkapin can be found in open stands of dry, deciduous forests or planted pines, on sandy or loamy ridges and hills. Also look for it on disturbed sites such as railroad rights-of-way, hedgerows, and powerline clearings. It can be locally abundant on longleaf pine and scrub oak habitats that are burned frequently. Fire benefits chinkapin by removing or reducing shade-tolerant competitors and opening the overstory, and because it will re-sprout vigorously following a fire event. It grows better in sun than shade, and will grow in dense thickets 6 to 30 feet in height on favorable sites.

The leaves of Allegheny chinkapin are simple, alternate, 3- to 6-inches long, have tooth-like edges, and are usually fuzzy on the underside. The fruit is a spiny, green burr that houses a single, chocolate brown to blackish-brown shiny nut. Nuts mature from late August to September in the South and in September and October farther north. Under good conditions, seedlings may produce nuts as early as the end of the second or third growing season. However, nut production is usually not significant until the fourth or fifth year, and in some cases 6-year-old plants have been reported to produce 1,200 to 1,500 nuts per plant.

There are several other naturally occurring varieties, including Ozark, coastal, and nuttal or bush chinkapin, but often their characteristics intermix, causing researchers to refer to them as single species under the name “chinkapin.”

Allegheny chinkapin nuts are excellent wildlife food and are consumed by fox squirrels, chipmunks, opossums, white-tailed deer, turkeys, blue jays, pileated and red-headed woodpeckers, and many other birds. Some studies show that chinkapin nut meat contains up to 45 percent carbohydrates, starches and sugars by weight. White-tailed deer also browse the foliage of Allegheny chinkapin, and it can have a high utilization rate (up to 81 percent browsed), even though it occurs in relatively low abundance.

To establish Allegheny chinkapin, seedlings should be planted in the early spring. For maximum fruit production, space plants at least eight feet apart in a row to ideally get 50 percent sunlight. When multiple rows are planted, space rows 20 feet apart. When planting in a sod, try to scalp the area about three feet around each seedling. Mulch each plant with two to four inches of woodchips, sawdust, or straw. Although it is adapted to grow in dry conditions, moisture is more critical during establishment.

Control weeds around the newly established plants for at least two years. If growth is not satisfactory in the first two years, apply a handful of fertilizer and work into the soil around the plant. Careful maintenance will be important to be successful.

This article is an excerpt from the “Natural Species Profile,” a regular feature of QDMA’s Quality Whitetails magazine.