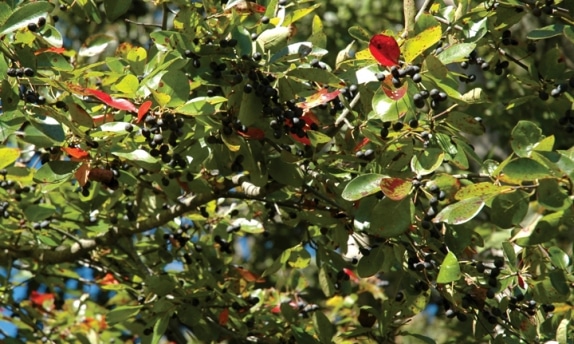 Blackgums occur in a variety of soil types from boggy to sandy and can be found from southern Ontario, Canada to Minnesota, south to Texas and Florida and in all eastern states from Maine southward.

This tree is also known as sour-gum or pepperidge and was called tupelo by Native Americans. The elliptic leaves are dark green and glossy. Blackgum fruit are a half-inch long, appear in fall, and are bluish-black. The yellowish-white seeds are football-shaped and have grooves running their entire length. Young trees have a narrow, triangular shape, and mature trees usually attain a dome shape and a height of 40 to 60 feet. The limbs, most visible during winter, have a characteristic horizontal appearance (see the photo in the gallery below). Blackgums prefer full sunlight but will tolerate filtered shade, and prefer acid soils.

Blackgums provide an abundant and varied food source for wildlife. The fruits are eaten by ruffed grouse, bobwhite quail, wild turkeys, wood ducks, over 30 species of songbirds, several species of squirrels, small rodents, gray foxes, opossums, raccoons, coyotes, black bears, and white-tailed deer. Beavers eat the wood, especially from young trees. Flowers attract pollinators and they attract a variety of insect-eating birds. Deer browse on the lush sprouts of seedlings. This is particularly important considering the thousands of drupes produced by individual blackgums with their seeds dispersed by soft mast-eating wildlife species that ultimately result in lush sprouts for whitetails. Understanding such interrelations in nature is the “art” of wildlife management.

Dr. Craig Harper and his University of Tennessee graduate students have measured browse preference by white-tailed deer on three different sites in Tennessee over the past seven years. This research has been partially funded by the QDMA. One site is in the Ridge and Valley physiographic province in east Tennessee, one is on the Cumberland Plateau, and the other is in the Upper Coastal Plain in west Tennessee. Thus, the results are applicable across a wide area with considerable differences in deer densities and herd structure. Browse species occurrence varied at each of the three sites. However, there were only two species browsed more than would be expected, based on availability, at all three sites – blackgum and greenbrier. Interestingly, honeysuckle was present at two sites, but at both, honeysuckle was browsed less than would be expected based on availability.

As a result, the researchers consider blackgum browse preferred by white-tailed deer over honeysuckle. This was visually apparent as well.

When conducting timber stand improvement (TSI), try to retain blackgums throughout the stand. Release those trees with good trunk and crown form, and if trees with poor stems or crowns are removed, don’t chemically treat the stumps. This will allow them to sprout and provide additional browse. Nutritionally, blackgum leaves consistently provide approximately 12 to 14 percent crude protein with less than 20 percent acid detergent fiber through the growing season until late summer/early fall, when digestibility decreases.

For those of us who must endure the sweltering heat and humidity and biting insects of July and August throughout the Southeast, blackgum trees offer a glimmer of hope that fall and its cooler weather are on the horizon. Blackgums are among the first plants to change color, with a flush of dark burgundy to red leaves by late September.

Joe Hamilton is a wildlife biologist and the founder of the Quality Deer Management Association (QDMA). During his nearly 20 years with the South Carolina Department of Natural Resources, Joe helped implement QDM practices on more than 2 million acres. In 2000, he was awarded the Deer Management Career Achievement Award from The Wildlife Society. In 2011, he was named Conservationist of the Year by Budweiser Outdoors. He currently serves as Senior Advisor for QDMA.