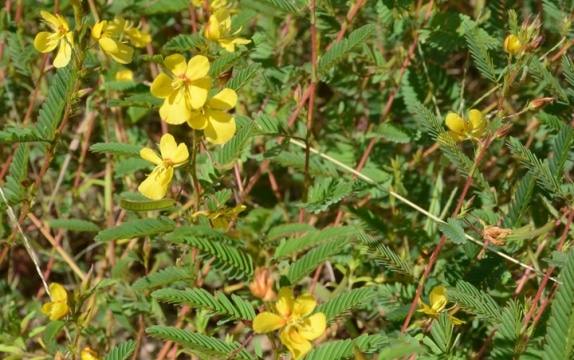 A member of the pea family, partridge pea is best known as a producer of valuable cover and food for upland game birds, waterfowl, and various small mammals. However, it also happens to be found across a large portion of the whitetail’s range and provides deer with moderate to preferred browse during the summer and early autumn months. Recognized by several common names (sleeping plant, showy partridge pea, locust weed, and others), partridge pea occurs throughout the central, south-central and eastern United States and is a native, upright, annual legume that shows off with ornate leaves, flowers and fruit.

Partridge pea routinely appears on newly disturbed soils and can be found growing in extensive colonies on prairies, riverbanks, bluffs and bottoms, as well as upland forests throughout the Great Plains states. It also commonly occurs on sandy savannahs of the lower Gulf Coastal Plain. Partridge pea favors sandy-textured, moist, partially acidic soils (pH 6.0 to 6.5). Although plants receiving full sunlight do well, it usually requires some shade for optimal production. Greatest seed production and vegetative growth generally occurs where plants are under about 30 percent shade; researchers have found seed yields drop considerably as shade exceeds 50 to 60 percent. Because it is a legume, it is also a nitrogen-fixing plant. 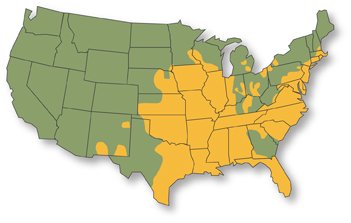 Wild legumes, including partridge pea, often are critical winter food and covers sources for upland game, especially when other food sources have spoiled or been depleted. This plant in particular is important for northern bobwhite and other quail because its dense stands stay in sound condition, providing thermal protection and nutrition (seeds) until early spring. Partridge pea seeds are generally high in phosphorus content and protein value, and low in crude fiber and lignin, making them easily digestible. Seeds are also eaten by ring-necked pheasants, mallards, greater and lesser prairie-chickens, and several grassland birds. Its browse maintains crude protein levels near 30 percent, but it is also relatively high in fiber and lignin levels. Livestock will consume it, but if ingested in large quantities it can be fatal. White-tailed deer can and will eat it without being harmed and do so readily throughout the summer and fall.

To establish new stands, partridge pea can be planted from March to May. Seeds can be drilled in rows at 1/4- to 3/4-inch deep at a rate of 10 to 15 pounds of pure live seed (PLS) per acre, or broadcast at a slightly higher rate, then cultipacked or dragged just enough to cover. Seed should be inoculated with the correct species of rhizobium before planting, and lime and fertilizer should be added according to soil test recommendations. Partridge pea usually re-seeds itself, but will gradually disappear without regular maintenance. Established stands should be lightly disked in the early spring to expose mineral soil on which the seed can germinate. In areas where prescribed burning is permitted, fire is an excellent method for controlling unwanted vegetation and should be performed every two to three years. In general, fire or disking should be done in late winter (February to early April) for best results, immediately prior to germination of residual seeds.

This article is an excerpt from the “Natural Species Profile,” a regular feature of QDMA’s Quality Whitetails magazine.