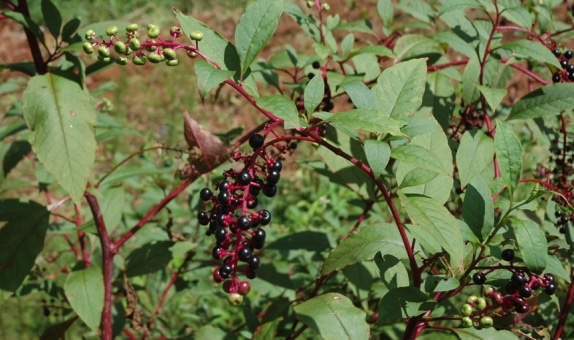 Pokeweed easily has over a dozen different common names, from pokeberry to poke salad to just plain poke. But no matter what it is called where you live, pokeweed is an extremely valuable soft mast and late-summer forage component for white-tailed deer throughout the eastern United States and Canada. Pokeweed is also a large, native, herbaceous perennial that has a rich history in both traditional and modern medicinal uses, though it can be poisonous to people (if prepared incorrectly) and livestock.

Pokeweed (Phytolacca americana) thrives in deep gravelly soils with moderate moisture and is most commonly found in disturbed sites, forest openings, edge habitats and new forest plantations. It can also become a weed of landscapes, nurseries or agricultural crops. Pokeweed can grow in a wide range of soil pH conditions (4.7 to 8.0). It grows well in sun or shade, reaching heights of up to 3 to 10 feet, and can readily survive periodic fire events due to its well developed root structure. In fact, older plants have a taproot over a foot long and 4 to 6 inches thick, allowing some plants to persist after canopy closure in maturing forests. New plants dispersed on undisturbed sites, such as no-till crop fields or uncultivated areas, are capable of becoming better established as their taproots develop. Pokeweed is spread mainly by birds due to its highly sought-after fruit, and seeds can stay viable for at least 40 years.

The leaves of pokeweed are alternate, smooth, oval, and 3- to 12-inches long, typically decreasing in size towards the top of the plant. Mature plants are shrub-like in appearance, with either single or multiple red- to purple-colored branched stems, which are smooth and hollow. During winter its stems begin to decay, turning black or dark brown, and eventually tan. Seedlings emerge again in spring, and within five to nine weeks after emergence brand new seedlings can develop a taproot that is capable of re-growth (the plant becomes perennial). Pokeweed flowers appear in early to mid-summer opposite the upper leaves on 3- to 6-inch long, narrow stalks called racemes. Flowers are arranged cylindrically along the raceme, are small (¼ inch), consisting of 5 white, greenish-white or pink petal-like sepals, and several green carpels folded together in the center. The shape of the central carpel resembles a miniature pumpkin. After the flowers die, the carpel eventually develops into pokeweed fruit. When ripe, the fruit becomes dark purple to black, shiny, and contains a reddish purple juice that is capable of staining everything from clothing to surrounding vegetation. Each fruit has 10 smooth, lens-shaped, glossy black seeds.

Pokeweed roots, seeds, stems, leaves and fruit all contain some level of toxins (in descending order), which can cause gastrointestinal problems, damage to red blood cells, and even death for humans and livestock. However, many species of wildlife display some level of immunity and will readily consume the fruit and/or browse safely. In fact, pokeweed fruits have considerable ecological value to over 15 species of songbirds and its seeds are an important fall and winter diet component of the mourning dove. Dozens of insects and hummingbirds seek pokeweed nectar, and bees collect their pollen. The fruit are also a vital late summer food source to some mammals, including the raccoon, opossum, grey fox, coyote and black bear. Of course, both the fruit and foliage are highly preferred by deer because of its ease of digestibility (as low as 12 percent acid detergent fiber) and high crude protein content (up to 32 percent).

You can encourage pokeweed with seasonal disking and prescribed burning regimes. In most cases, pokeweed is not a bad plant to see in your food plots because of its value to deer, but in high densities it can be very competitive to row crops. Since it is a perennial, a single herbicide application will only initially set pokeweed back in established populations. Effective management must include both mechanical and chemical means. Tillage will control seedlings after five to six weeks of emergence; however, when plant size and ages vary, a direct application of herbicide may be needed with tillage.

Did you know? Every issue of NDA’s Quality Whitetails magazine contains profiles of two naturally occurring plant species that are important to deer and other wildlife, helping you learn to identify and encourage quality forage and cover for whitetails. This article is reprinted from a previous issue. To receive every issue of our magazine, become an NDA member today!