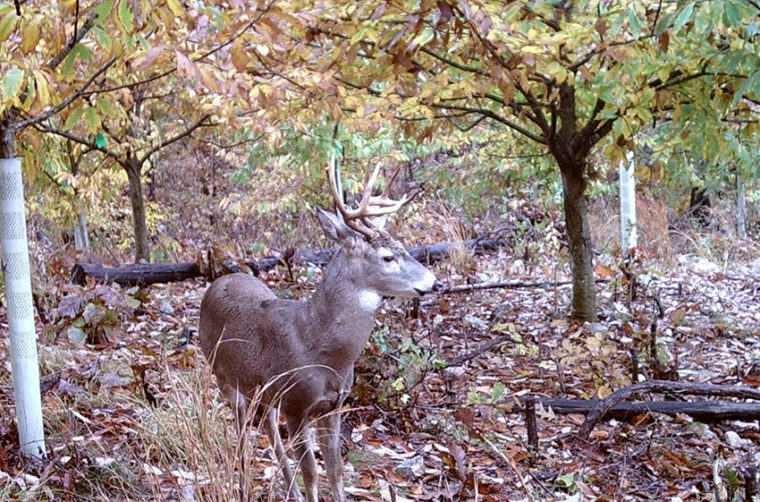 Once thought to be extirpated from its range, the Ozark chinquapin (Castanea ozarkensis) is a drought tolerant hardwood tree that reaches up to 65 feet tall and 2-3 feet in diameter.  Ozark chinquapins bloom in late May to early June and the thumbnail-sized seeds drop every year from September to the end of October. These “Ozark Chestnuts” are highly nutritious for wildlife, and their smaller size makes them much easier to eat. Due to their blooming time, Ozark chinquapins produce a very reliable source of hard mast every year, which just so happens to be during early bow season throughout the tree’s native range.

In trail-camera photos and in person, I have witnessed deer bed down next to or even in a stand of Ozark chinquapin trees. When the wind blew, the nuts fell to the ground and the deer immediately got up to go eat the sweet, nutritious, and delicious nuts. I’m not a big fan of eating or cooking with nuts, but I make an exception when it comes to Ozark chinquapins! They are so sweet and flavorful, raw or cooked! 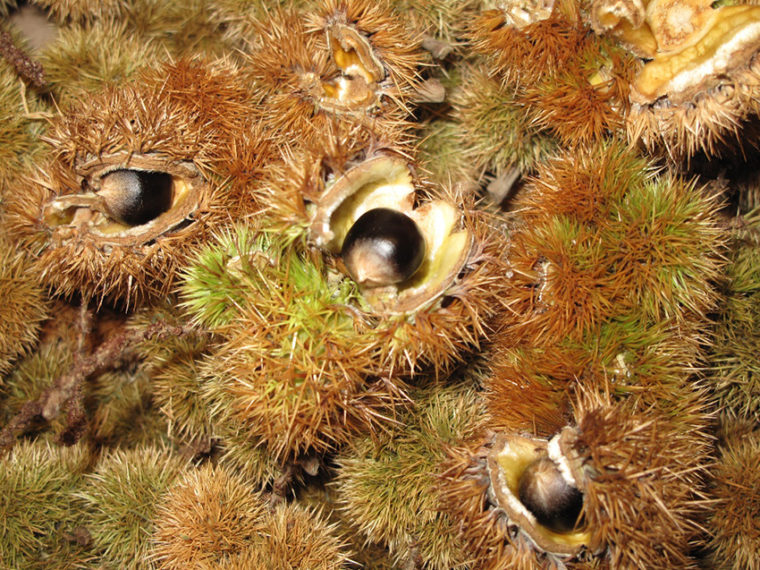 According to a recent nutrition analysis and comparison, the Ozark chinquapin is one of the most nutritious hard mast crops in the forest for deer, with more protein, carbs and fat than white oak acorns.

Remnants of this once keystone species can still be found on the rocky upper slopes and ridge tops of the Ozark and Ouachita Mountains in Missouri, Arkansas, Oklahoma and Eastern Texas. They can also be found in lesser abundance in northern Louisiana, Alabama, Mississippi, and Georgia. Historic accounts of “giant chinquapins” have been noted as far east as Virginia that could very well have been Ozark chinquapins instead of the Allegheny Chinkapin. 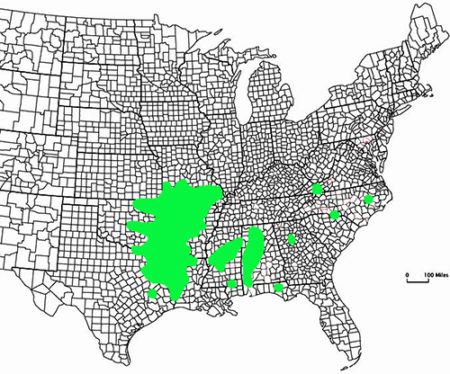 Ozark Chinquapins are a relative of the American chestnut and just like their relatives, these trees are also susceptible to chestnut blight, which has severely impacted their abundance in the forests of their home range.

Ozark Chinquapins are often lumped into the same category as the Allegheny chinkapin, but recent research has shown them to be two different species based on their home ranges, growing characteristics (trees vs. shrubs), different sized leaves and nuts, etc. DNA research from the University of Tennessee at Chattanooga showed that the Ozark chinquapin actually has more genetic variability than both the American chestnut and Allegheny chinkapin. Their findings also revealed that the Allegheny chinkapin (C. pumila) and the American chestnut (C. dentata) are more closely related to each other than they are to the Ozark chinquapin.

What’s in a Name?

Another noticeable difference between the two types of chinquapins is the spelling of the word chinquapin vs. chinkapin. According to Merriam-Webster dictionary, chinquapin is the preferred spelling but chinkapin is considered a variant of the word. So, either spelling is acceptable, and both are often used interchangeably. There are also other historical spellings and misspellings of the word including, but not limited to: chincapin, chincomen, chechinquamen, chinkeepin, chinkeypin, and chinquepin. The variations in spelling has been going on possibly since the origin of the word written phonetically from the Native American pronunciation of the tree.

The leaves of the Ozark chinquapin are variable, from 5.5 to 9.25 inches long, among populations and even on individual trees.  The leaves are arranged in an alternate pattern and have coarse teeth and are slightly broader above the middle. 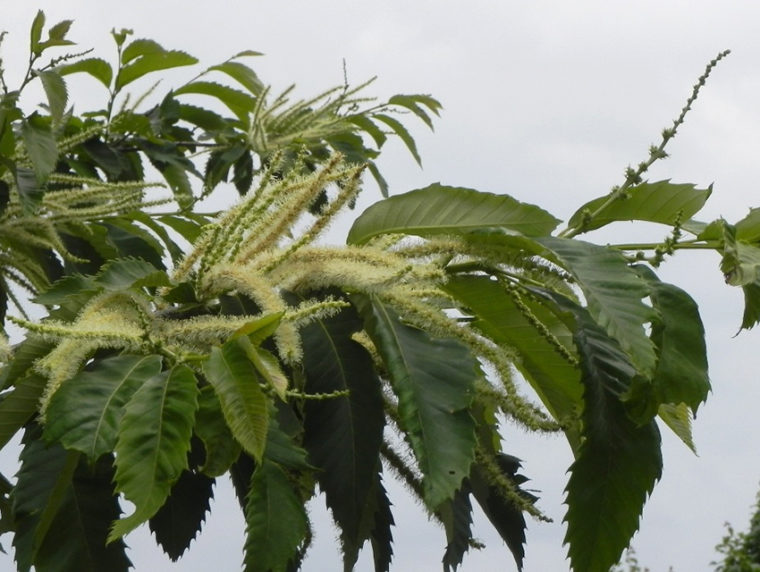 Ozark chinquapin trees bloom in late May to early June. The trees are monoecious and self-incompatible – they require another tree for pollination. They are both wind and insect pollinated. Male catkins can be up to 10 inches long and start off as an off-white color and fade to yellow with time. The female flowers are located closer to the end of the branch and are approximately 3 inches long. They are green in color and look like an extreme miniature version of the spiny burrs.

Clusters of five to 10 burrs are located about a foot away from the end of the branch because the tree continues to grow after flowering has occurred. The burrs are green while the nut is forming inside their spiny exterior and they turn to brown once the nuts have fully developed. The spiny brown burrs will then split open revealing the dark brown nut inside that is surrounded by the velvet like interior of the burr. Each one of the burrs contains one nut. On very rare occasions they can produce more than one nut. The nuts are approximately 20 mm long, and about 10mm wide (about the size of your thumbnail).  Trees can start producing nuts by age 3 and mature trees have been shown to produce up to 6,000 nuts per tree!

Ozark chinquapins grow naturally in rocky and dry soil on a slope. They prefer full sun with well-drained soil because the tap root system can’t tolerate standing water. So, as long as there is good drainage for the root system and plenty of sun they can grow in a variety of locales. When planting seeds, always plant at least four to five seeds in a diamond pattern, 18 to 30 feet apart to allow for good pollination and nut production. Plant germinated seeds directly in the ground (not in pots) the following spring as soon as the threat of frost has passed. Plant about half an inch deep directly into the ground.  Squirrels, mice, chipmunks, and a host of other animals will attempt to pull the still attached nut from the plant if they can get to it, which could cause the plant to die, so a 4-foot tall tree protector tube is highly recommended for protection.

Seeds can be obtained directly from the Ozark Chinquapin Foundation for members as available each year.

Cheyne Matzenbacher is an NDA Deer Outreach Specialist in Missouri. A Missouri native and lifelong deer hunter, Cheyne works with private landowners to establish and support Wildlife Management Cooperatives in the southern half of half of the state.
View all Articles By Cheyne Matzenbacher