Is Late Rutting Activity an Indicator of Problems? 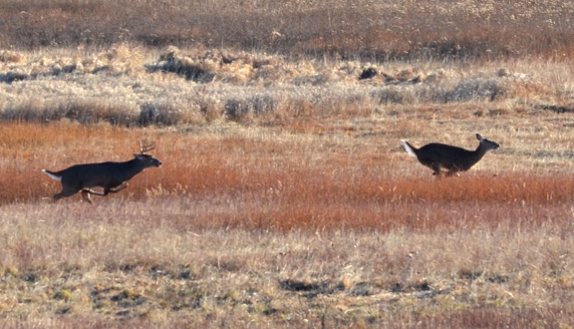 I have been asked many times about rutting activity during December and January and whether this signals a problem.

Rubs, scrapes and chasing behavior during December and January are common sights to deer hunters and managers in the South. Deer in southern latitudes are afforded the luxury of breeding during several months, even though this can still be a sign of poor health, poor habitat or skewed sex ratios and can be improved by better deer management. I have seen newborn fawns in central Florida as early as March and as late as November. These fawns would have been conceived in August and April, respectively. This demonstrates that does breed during at least 9 months of the year in Florida, and this window is around five months in most other areas of the South. This phenomenon has been well documented in the scientific literature.

Deer in northern latitudes are not afforded the luxury of breeding over that range of months. Weather and vegetation growth cycles dictate that the majority of deer breed over a relatively short time period. A tight breeding window ensures an equally tight fawning period corresponding with the peak of native-vegetation quality after spring green-up. This timing is critical as fawns arriving at green-up receive nutritional advantages over fawns arriving early or late. This phenomenon increases in importance as you move north and is also well documented in the scientific literature.

December and January rutting activity in the South is common. This activity in the North may be a red flag depending on who is doing the breeding. The majority of deer in northern latitudes breed during a 2- to 3-week window in November. Conception data from Pennsylvania, however, shows deer breed over at least a 100-day period. Most of these deer breed during November, but a few breed as early as September and as late as February. These early and late breeders are at a distinct ecological disadvantage. Does that are not bred during their first estrous cycle will cycle again in about 28 days. Therefore, if a doe isn’t bred during November, she will recycle in December and again in January if necessary. Does that breed late will have fawns that are born late, and late fawns begin their life disadvantaged. In these cases, December and January breeding signals poor management.

Quality Deer Management can help increase the number of does that are bred during the optimal breeding period by balancing the adult sex ratio and increasing the number of mature bucks in the population. Poorly managed herds often have skewed sex ratios favoring does and contain more deer than the habitat can adequately support. This number of deer can be high, or it can be low if the habitat is poor. For example, 15 deer per square mile may not sound like many deer if you are used to having high densities, but it is too many if the habitat can only support five to 10 deer per square mile.

Even well-managed northern herds can show signs of December and January breeding. I’ll define “well-managed” as having the proper number of deer for the habitat, a balanced adult sex ratio (less than two does per buck) and bucks in multiple age classes (25 percent or more of the bucks are 3 1/2 or older). Because these herds are in balance with the habitat, the deer typically receive enough nutrition to express their body, antler and reproductive potential. Late breeding in these herds is more common following autumns with abundant mast and/or agricultural crops and during winters that begin with mild weather.

The culprits are often 7- to 8-month-old doe fawns. Fawns can become sexually mature in their first fall and can breed if they reach a certain body size, approximately 80 to 90 pounds for northern deer and about 70 pounds for whitetails in the South. Fawns that receive abundant forage can reach this threshold weight, but they often reach it after the primary breeding period. These breeders come into estrus in December, January and even February, and are often the reason for late-season rutting activity.

The percentage of fawns that breed is an important piece of data for managers to collect. It is not uncommon in areas with poor habitat, overabundant herds and/or extreme winter conditions to have less than 5 percent of doe fawns breeding. Conversely, it is not uncommon in areas with good soils, abundant forage, balanced deer herds and/or mild winters to have 50 percent of the doe fawns breeding.

The Answer Lies in Your Data

So how do you know if late-season breeding is being conducted primarily by adults or fawns? The answer lies in your harvest data. Are your doe weights above average for your respective region? What percentage of your adult does are lactating? Are any of your yearling does lactating? If yearlings are lactating, that means they were bred as fawns. This is why it is so important to pull a jawbone and collect data from every deer harvested or found dead on the property. The percentage of yearling and 2 1/2-year-old does lactating provides much insight into the cause of late-season breeding activity.

Here’s a look at seven easy ways you can collect the data you need.

If your adult does have low body weights and low lactation rates for your area, then late-season breeding activity may be a sign your management program needs help. Other cues are likely also present, such as a skewed adult sex ratio, poor fawn-to-doe ratio and predominantly young buck age structure. If your adult does have good body weights and high lactation rates, then at least some and probably most of the late-season breeding activity involves fawns. Again, other cues will likely be present such as a balanced adult sex ratio, high fawn-to-doe ratio and a higher percentage of older bucks in the population.

Every rule has exceptions, though, and areas with large amounts of agriculture typically have higher percentages of fawns breeding.

Abundant food can mask some management shortfalls. The increased quantity and quality of nutrition from agricultural crops can put deer on a higher nutritional plane and allow a higher percentage of doe fawns to breed.

So, is late-season rutting sign good or bad? If you are in the South it may be a sign that deer physical condition is poor or adult sex ratios are highly skewed toward does, but if you are in the North it is definitely a critical piece of information. Look at your harvest data and the health of the habitat. North or South, they will let you know whether your management program is progressing or is in need of help.

Kip Adams of Knoxville, Pennsylvania, is a certified wildlife biologist and QDMA's Director of Conservation. He has a bachelor's degree in wildlife and fisheries science from Penn State University and a master's in wildlife from the University of New Hampshire. He's also a certified taxidermist. Before joining QDMA, Kip was the deer and bear biologist for the New Hampshire Fish & Game Department. Kip and his wife Amy have a daughter, Katie, and a son, Bo.
View all Articles By Kip Adams