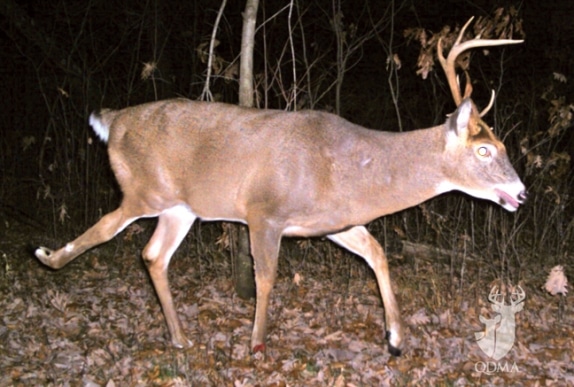 Major skeletal injuries, such as broken legs, can sometimes have strange and unexpected effects on the future antler growth of whitetail bucks. The neurological connection isn’t completely understood or easily explained, but such effects have been documented many times. In November 2012, QDMA member Todd Reabe of Wisconsin got several photographs of a buck with just such a condition. Todd doesn’t know the buck’s history or how it came to break its right rear leg. By the time Todd first encountered him, the buck’s leg bones had already fused together, as seen in the photo above, rendering the leg useless. Though not always, rear leg injuries often affect future antler growth on the opposite side of the buck’s body, and that’s the case with this deer. Note the crazy deformity of the buck’s left antler in 2012!

Despite his obvious handicap, the buck was captured on film throughout the rut last year, working scrapes and covering ground in search of does!

FIRST UPDATE: On November 6, 2013, we got an e-mail from Todd. The three-legged buck was back, appearing in new photos Todd captured on October 29. The buck appears healthy, and the antler deformity is still significant.

“I had a pretty good idea where his core area was, and that theory was reinforced when our neighbor found his deformed shed this past spring,” Todd wrote. “The neighbor’s son got several pictures of him over the summer, and then in September he started to shift his pattern and then disappeared. He suddenly appeared on my cameras on October 29.” (Photos below).

Strangely enough, the buck’s right rear hoof looks like it is growing unusually long since it no longer comes in contact with the ground as the buck walks (which Todd has documented in trail-camera videos of the buck walking).

At last report on November 6, Todd was hoping to get in bow range of the buck, with no luck. We’ll let you know if Todd is able to arrow this unique Wisconsin buck!

FINAL UPDATE: The buck was harvested and, after much investigation, the mystery was solved!