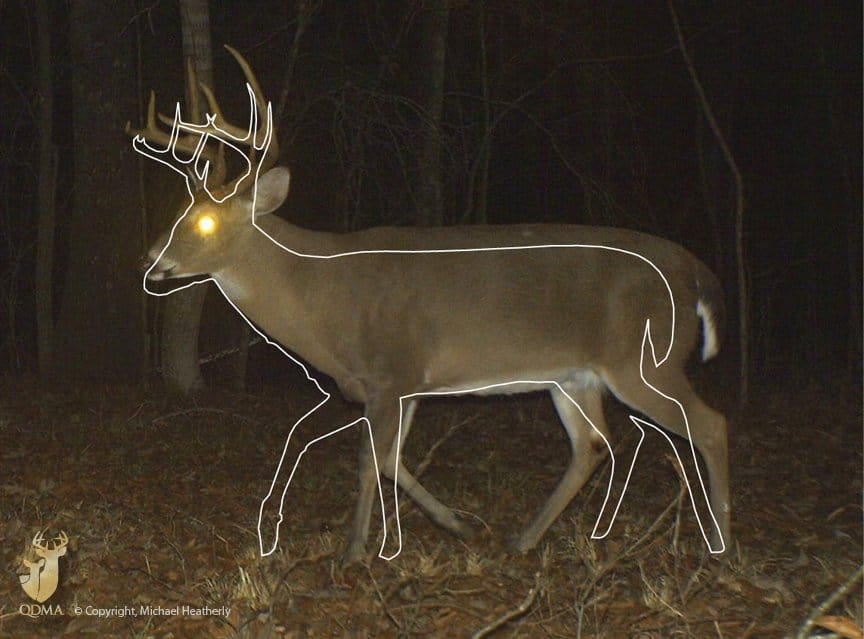 Is there a wall or door somewhere in your childhood home bearing pencil marks that track your height through the years? If we could just as easily track the body proportions of whitetail bucks as they grow, it would be a great help in estimating their age each time we see them again. I received a pair of trail-camera photos recently that offer us a glimpse of the pencil marks in buck body growth.

The five “Age This!” panelists in Quality Whitetails often talk about leg length in proportion to body size when estimating the age of bucks in trail-camera photos. Describing yearlings and 2½-year-old bucks, they tend to say their legs appear too long for the bodies. Middle-age bucks tend to have legs that look about right for their bodies. Mature bucks often appear to have legs that are too short.

Learning to analyze this characteristic is not about eyeballing actual leg length. It’s about studying the buck’s overall proportions as an indicator of age. The photos I received provide a rare and revealing look at these proportions. They came from QDMA member Michael Heatherly, who captured them on an 800-acre hunting property in Macon County, Alabama. Taken about two weeks apart just before the rut, the two photos show bucks approaching a scrape – and one buck appears to be younger than the other. Both are perfect aging shots, because the bucks are broadside, heads up, and walking slowly. Most important to this discussion, the bucks are standing in almost the exact same location, equally distant from the camera, and approaching from the same angle. In fact, they are almost standing in the same tracks!

Noticing this, I overlapped the two photos using Photoshop and made the top image slightly transparent so I could see both bucks at the same time. The result was interesting. I found the best way to display and discuss the effect with you was to trace one buck in a white outline and place that outline over the other photo in the exact same location in the photo frame. You can see what I’m talking about in the Gallery below.

After you click to enlarge the photos in the Gallery, you’ll see the close alignment. Note the bucks’ chests and heads are almost perfectly joined. Also study the legs: They are almost identical in actual length. The joints are all in about the same location.

But clearly, one of these bucks is older and physically larger than the other. Where’s the difference?

Neck: The bucks’ chins, noses and throats are almost aligned, which accentuates the fact that the older buck’s neck is significantly thicker. The younger buck is no pencil-neck by any stretch, but the older buck simply has more girth, and it appears to show mostly along the top of the neck. This has the effect of making the older buck’s head appear smaller in proportion to the rest of its body. Its head from nose to ears also appears shorter (even though it isn’t), deeper, and more blunt.

Back: Look at how much higher the older buck’s back is despite the fact his chest isn’t any higher off the ground, and his legs aren’t appreciably longer.

Hindquarters: The older buck has several inches of body height on the younger buck, running from the neck through the shoulders and along the back. That height continues into the hindquarters, goes right on around the rump and down the flanks. The older buck appears to even be a little longer from chest to tail.

There are other differences we could discuss, but none so dramatic as the difference in the upper bodies, and this goes back to the discussion of leg length. Younger bucks don’t have longer legs, and older bucks don’t have shorter ones – the difference is in the upper body. As a buck matures, it puts on bulk in the neck, shoulders, mid-section and hindquarters. This has the effect of making the legs appear to be “too short for the body.” The younger buck in these photos appears to be well-proportioned and youthful, while the older buck looks like a whiskey keg with legs.

So, as you study trail-camera photos where you hunt, analyze leg length in proportion to body size and see if it tips you off to age.

In the meantime, I plan to send these two bucks to our “Age This!” panelists to get their age estimate. I didn’t tell you my opinion on their age, because I want to hear yours first. Share your age estimate for these two bucks in the comment section below. And thanks to Michael Heatherly for sharing his photos!