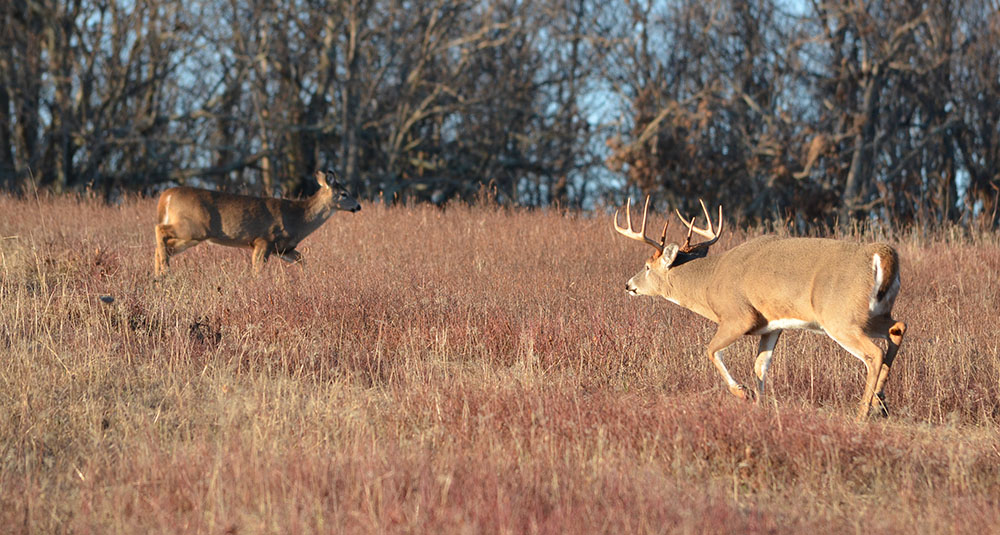 Some hunters believe they witness an “October Lull” or a peak-rut “Lockdown Phase,” when mature bucks suddenly stop moving or hole-up with an estrus doe. Researcher Andy Olson did not see evidence of either in the movements of three mature Pennsylvania bucks wearing GPS tracking collars.

“We had fine-scale movement data for these three bucks for three straight months in 2012: October, November and December,” Andy said. “If the ‘lockdown phase’ exists, I think you would have seen it with these deer. I think some hunters put a human spin on their explanations for deer behaviors, and in their story a buck finds a doe and goes into the honeymoon suite for a few days. But I found different explanations. During peak rut, these deer were just crazy. They were all over the place.”

A Pennsylvania native, Andy is currently summarizing his findings for his master’s degree thesis at the University of Georgia. For his study, he captured and collared adult bucks in northern Pennsylvania, in a large region of unbroken hardwood forest that included both private and public hunting land. The bucks wore GPS collars that recorded their precise locations every 15 minutes (One of the darted bucks wearing a GPS collar is seen with Andy in the photo above, just before being released). Andy was able to determine home ranges and habitat choices for 15 mature bucks, with recorded locations covering more than 16,500 contiguous acres.

However, there were interruptions in rut information. Some bucks were killed by hunters. Some of the collars failed in mid-study. In the end, Andy had uninterrupted movement records through October, November and December, at 15-minute intervals, for three adult bucks aged 3.5, 4.5 and 5.5-plus years. While three bucks is a small sample size for research, the bucks behaved similarly to bucks in other recent GPS-collar studies.

If the Bedding Cover is Rocking, Don’t Come Knocking

Andy looked at fetal data collected by the Pennsylvania Game Commission which showed that 80 percent of the statewide deer breeding dates occurred during November. Using this information, he designated October as the “pre rut,” November as “peak rut,” and December as the “post rut.” Overall, he saw the highest movement rates by the three bucks in November.

“With 80 percent of the does bred in that time period, it makes sense that the highest period of movement was the whole month of November,” he said.

But Andy did not see any “honeymoon” periods when any of the three bucks appeared to vanish into the Love Shack with their doe.

“A doe comes into estrus for 24 to 48 hours,” Andy said. “I’ve heard hunters say they think a buck shacks up with a doe for three days or so, but if you think about it, even if he does just sit in a small clearcut with a doe until she stands for him, 24 to 48 hours is not enough time for a hunter to really notice that buck is not moving.”

So Why Don’t I See Him Anymore?

Many hunters witness bucks vanish from in front of their eyes as well as their trail-cameras, sometimes after having appeared regularly for weeks. Andy’s three bucks offered an explanation.

“I did an analysis of space usage, and I saw that during that peak breeding time, they were covering a lot more ground. With a trail-camera, you’re trying to get a buck to walk right by a specific tree or scrape. During the rut, he’s passing that tree or scrape a lot less often.”

But Andy also witnessed the three bucks focusing on certain regions of their ranges, even as their overall movements were at an all-time high. During one week, a buck’s movements would be concentrated in one portion of his range, followed by a different portion the next. This finding matches observations from other recent studies of buck movements during the rut.

“A hunter who happened to be in the northern end of the buck’s range might be seeing or photographing him regularly one week, and all of a sudden he disappears,” Andy said. “The buck might now be focusing on the eastern portion of his range instead of the north. He didn’t lockdown with a doe.”

Comparing the three months of breeding season, Andy noted that December or post-rut movements were essentially the same as October’s pre-rut movements. He saw nothing mysterious or unusual about October, such as a “lull” in buck movements.

Did They “Go Nocturnal”?

The increase in movement rates in November, Andy said, was equal for all time periods of the day. While the three bucks did move more at night in November than they did in October and December, they were also moving more at dawn, dusk and the middle of the day. Even in November, the daily movement peaks were still at dawn and dusk.

“We know deer are crepuscular,” Andy said. “I did not see bucks going nocturnal. Yes, there was a big increase in nocturnal activity during peak rut, but there was a huge increase across the board for all phases of the day. They remained crepuscular, moving most at dawn and dusk.”

One tip Andy offered for November hunters: You’re not wasting your time if you stay in the stand all day long. While morning and evening movements were always greater than mid-day, movement throughout daylight hours was double to quadruple the levels of pre-rut movement. This is also similar to findings in other GPS studies of buck movements.

Andy is now writing and editing his thesis on the study, which is unique because it took place in hardwood forests of a northern state. Most other recent GPS-collar studies of buck movements have taken place in the scrub habitat of the southwest or the agriculture-dominated landscapes of eastern states.

Look for a lengthy feature article by Andy summarizing more of his findings from his buck-movement study, including home-range size and habitat choices, in a future issue of Quality Whitetails magazine. Start receiving our magazine by joining NDA today.