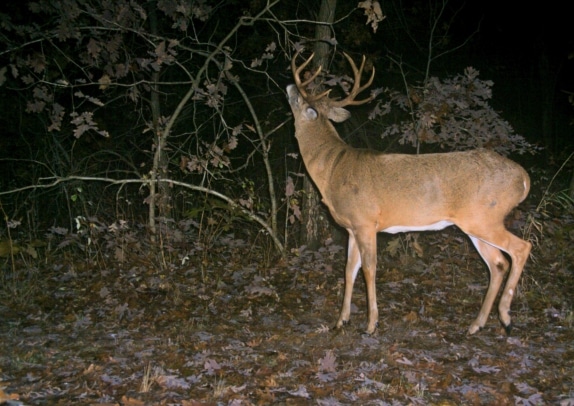 For decades in the late 1900s states such as Alabama, Michigan, Pennsylvania and others managed deer herds in such a manner that the majority of bucks harvested were 1½ years old and very few bucks ever reached maturity. In Pennsylvania, less than 1 percent of bucks reached maturity prior to implementation of antler restrictions in 2002. Even in the absence of mature bucks, does will still breed and most northern does will even breed during their first estrous cycle. Does this mean there is no biological benefit to having mature bucks in a herd? Does it mean there is no biological harm in not having them?

The importance of mature bucks extends far beyond being the most sought-after targets during hunting season. To understand why, let’s first define maturity and then look at the role mature bucks play in a deer herd.

Whitetail bucks generally reach skeletal maturity from 4½ to 6½ years and grow their largest set of antlers from 5½ to 7½ years. Most biologists refer to bucks 1½ to 2½ as young or immature, 3½ to 4½ as middle-aged, and 5½ or older as mature. For this article, let’s combine middle-aged and mature bucks and consider 3½ years old or older as mature.

Mature bucks are awesome creatures. Even dyed-in-the-wool meat hunters relish the opportunity to shoot a mature whitetail. And why not? Mature bucks are rare in many areas and it’s difficult to make them available to hunters. Producing them requires knowledge, skill and time, and harvesting them is usually more difficult. Just as big fish and big trees indicate successful fishery and forestry programs, the presence of mature bucks is a positive sign for a deer management program.

Whitetails are social animals, and scent is their primary communication method. During the breeding season signposts such as rubs and scrapes provide the location for scent marking and information sharing. A growing body of research suggests pheromones (chemicals secreted from an animal’s body that affect other animals) are deposited at these signposts by mature bucks, and these pheromones may have a “bio-stimulating” or trigger effect on the breeding season.

Research also suggests that older bucks produce “controlling” or “priming” pheromones that yearling bucks are not physically mature enough to produce. Some studies even suggest a buck reaching dominant status produce greater amounts of pheromones than less dominant bucks of the same age, and increased stimulation of does by mature bucks through signposts may cause earlier and more synchronized breeding. While there isn’t definitive proof that priming pheromones exist in whitetails, retired researcher Louis Verme and his colleagues found that does penned with bucks experienced estrous earlier than those that were not.

As most hunters know, rubs and scrapes play central roles in deer social life immediately before and during the rut. The relative abundance of rubs and scrapes on a given area is directly related to the density of mature bucks, and areas with mature bucks can have 10 times as many rubs as areas without them. Noted researchers John Ozoga and Louis Verme found yearling bucks lacked the scent-marking behaviors characteristic of mature bucks. In their study, mature bucks began making scrapes two months before any doe bred, whereas yearling bucks made only 15 percent as many scrapes and none until one week before the first doe bred. They also noted yearling bucks made only 50 percent as many rubs as mature bucks during the breeding season.

Signpost behaviors are important to the whitetail’s breeding ecology, and therefore the “priming” effect that mature bucks may have on the length and/or timing of the rut is reduced or absent when mature bucks are scarce.

The priming effect from signposts likely has a stronger effect in southern latitudes as northern studies show the majority of does are bred during their first cycle even in the absence of mature bucks. However, this doesn’t discount the benefit of mature bucks to northern herds. Research shows young bucks engage in breeding and may sire nearly a third (30 percent) of fawns even in populations where mature bucks comprise over 50 percent of the bucks. Of course young bucks sire a higher percentage of fawns in populations with fewer mature bucks. However, this is unfortunate because it is advantageous for yearling bucks to spend less time chasing and/or breeding does and additional time feeding and storing fat for the upcoming winter. Yearling bucks that enter winter in better physical condition have higher winter survival rates and are able to contribute more spring forage to body growth and less to recovering the additional body weight lost during winter. Young bucks can handle the breeding requirements of a herd but they do so at their own

nutritional expense. Therefore, the presence of mature bucks suppresses the breeding activities of young bucks. This is good for the future health and growth of these young bucks and the health of the entire deer population.

Breeding Dates and Timing of the Fawn Drop

Abundant research shows skewed adult sex ratios combined with young buck age structures often result in does not being bred until their second or third estrous cycles. Second and third-cycle fawns are born one to two months later than fawns from does bred on time, and these fawns begin life at a distinct disadvantage. Habitat quality is reduced by the time they’re born, they have less time to grow before the onset of winter, and predation rates are often higher because you lose the “saturation effect” of having abundant prey on the ground at the same time.

Mature bucks are part of a “natural” deer herd. Archaeologists determined historic deer populations had an advanced age structure. We assume that Native American hunter-gatherers harvested the first deer available, regardless of its age or sex, and thus their harvest was a relatively random sample of the population. Examinations of deer remains in Native American middens (trash piles) suggests many deer survived to older ages (20 to 26 percent of populations were 5 years or older). Interestingly, data from modern-day unhunted herds show similar age structures. Unfortunately, most modern-day hunted herds have this age structure for does but few do for bucks, a result of harvests made up largely of yearling bucks. However, according to Dr. Dave Guynn from Clemson University, when a balanced age structure is achieved it ensures the behavioral and biological mechanisms that shape deer populations are allowed to function. Dave continues that the density, sex ratio and age structure of a deer herd should mimic a population regulated by natural predators and hunting by Native Americans. This natural condition provides for a nutritionally and socially healthy herd, and it is only achieved when mature bucks are present.

In addition to the biological benefits, mature bucks also provide additional recreational opportunities for hunters. Sightings or trail-camera photos of a mature buck can help motivate more hunters and keep them afield longer. When you are trying to achieve doe harvest goals, recruit help for habitat management efforts, or simply gather attentive club members for an educational program on QDM topics, increased interest works in your favor.

Finally, the enjoyment level of hunting is often directly proportional to mature buck numbers. More mature bucks equals more rubs and scrapes for hunters to find. Hunters witness behaviors like sparring and chasing more often, and hunters are more likely to hear vocalizations like grunting. Success rates with rattling and calling are higher. Even hunting for shed antlers in the off-season is more productive. All of these factors increase enthusiasm for hunting and year-round QDM efforts.

So, can deer herds exist without mature bucks? Sure they can, but remember:

• Young bucks’ fitness can be enhanced by the presence of mature bucks.

All of these points are good for the deer herd, for deer management and for the future of hunting. The next time you pass a young buck, know that you did your part to improve the health of the deer herd as well as increase your chance of taking a mature buck in the future.