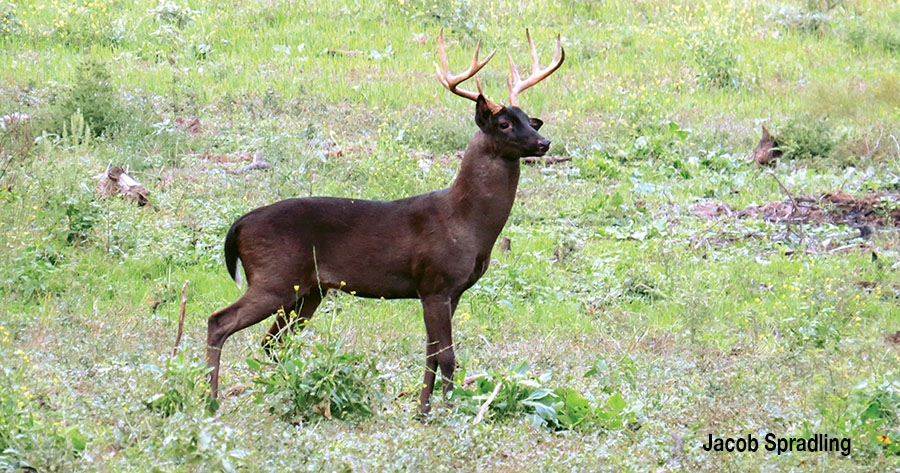 Each fall, deer hunters see or harvest albino or piebald whitetails and discuss what a rare occurrence that is. But an even greater rarity exists: melanistic whitetails.

Melanistic whitetails are a true gem of whitetail color morphs. With very low odds for this genetic mutation and low reported harvest, viewing a wild melanistic whitetail is a true rarity, even for deer biologists who work where they are most prevalent. However, George Blitch had the rare opportunity to harvest the melanistic buck pictured above on his family’s land in Texas during the 2016 deer season. The full story of the buck George called Black Beauty appeared in the October/November 2017 issue of Quality Whitetails.

Melanism is so rare that little is known about it, but here are a few available facts.

What is a melanistic deer?

Melanistic deer lack distinct variations in color such as brown or white pelage. Most melanistic whitetails are black across their entire body with the exception of the hair around the ventral area under the tail.

Why does melanism occur?

Melanism is a random genetic anomaly. Changes in the coat color of mammals are believed to be mutations in the melanicortin 1 receptor gene (MC1R). The mutated gene that causes melanism is believed to be recessive, just like the gene responsible for some albinism and all piebaldism. Melanistic and normal whitetails do coexist in the same area.

The first known record of melanism in whitetails was in 1929, according to Leonard Lee Rue. Melanistic whitetails have been reported in Mississippi, Michigan, Virginia, Pennsylvania, Texas, and South Carolina, and they can occur almost anywhere by genetic mutation. However, a 1999 study by Dr. John T. Baccus and John C. Posey at Texas Tech University reported an incidence rate of 8.5 percent in an area covering eight central Texas counties: Blanco, Burnet, Caldwell, Comal, Guadalupe, Hays, Travis, and Williamson. This is the highest known localized incidence rate of melanism anywhere in the whitetail’s range. This 8-county region straddles the eastern edge of the Edwards Plateau Ecological Region (pictured below) and adjacent areas of the Blackland Prairie Ecological Region, known as Balcones Escarpment. This area holds the only known population of whitetails in North America experiencing melanism at a significantly elevated rate.

Melanism is viewed as a rare, random genetic mutation across much of the whitetail’s range. However, some researchers have speculated that the high frequencies seen in the Edwards Plateau region cannot be due to simple random mutations. Melanism may serve as an advantageous trait offering increased survival probability in certain habitats, and the trait may help whitetails blend with the region’s deep drainages and thick cover. One study noted high densities of melanism near and along river drainages when mapped. The trait may also be a vestige from ancestral whitetails that perpetuated the trait when conditions favored dark individuals hundreds or thousands of years ago. However, researchers still have no definitive explanation.

Hunters of free-ranging whitetails cannot change population genetics through harvest choices, so harvesting or passing a melanistic deer will have no measurable impact on the frequency of this anomaly. However, some hunters in the Edwards Plateau region of Texas will not harvest these animals in hopes of perpetuating the genetic anomaly or simply because of the animals’ uniqueness.

Other than coat color, there is no physical difference between melanistic and normal whitetails. Melanistic whitetails are safe to consume if harvested, and melanism is not a threat to deer populations, even where it occurs more frequently.

Melanistic whitetails are certainly a wonder of the whitetail woods, and if you are fortunate enough to see one, count yourself extremely lucky!

Hunter Pruitt of Athens, Ga., is QDMA’s Support Service Coordinator and a graduate student in wildlife management at the University of Georgia’s Warnell School of Forestry and Natural Resources.