The Why and How of Mock Scrapes 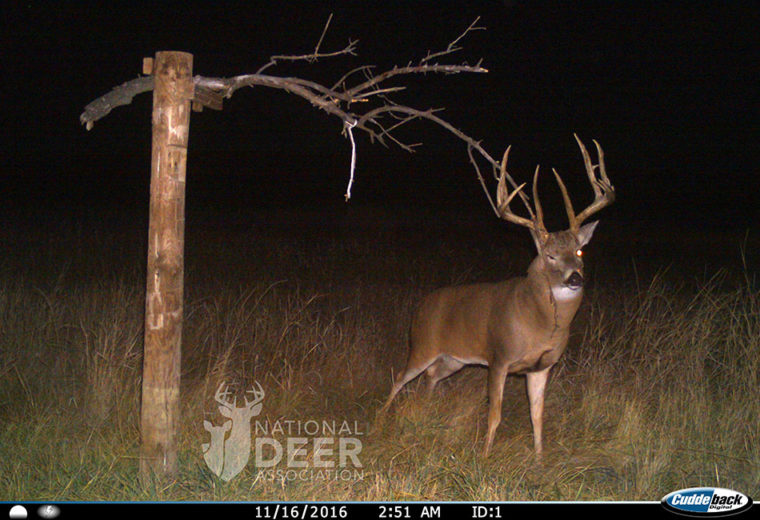 Virtually every hunter I know gets excited when they see a big, active scrape. There’s just something mysterious about them that intrigues us and gets our hearts pumping a little faster. We know when we start seeing those scrapes that the most exciting part of the season is just around the corner.

My love affair with “mock scrapes” began about 10 years ago. A friend and I were out doing some summertime scouting on a new property. We were basically walking logging roads looking for sign in anticipation of hanging stands for the fall hunt. As we approached an intersection in the logging road, I couldn’t help but notice a low-hanging beech limb right in the intersection of the road. At nearly the same time we both said “I bet there will be a scrape there this fall.”

At that point I had never really thought about where bucks made scrapes, but after years of observation, it was a definite “Aha!” moment, and it all came together in an instant. Sure enough, around mid-October, multiple scrapes appeared under that limb. Some time later, I realized if I could determine that a deer would make a scrape at a certain location, then I should be able to replicate those scenarios and make bucks scrape where I wanted them to. Thus began a new addiction. 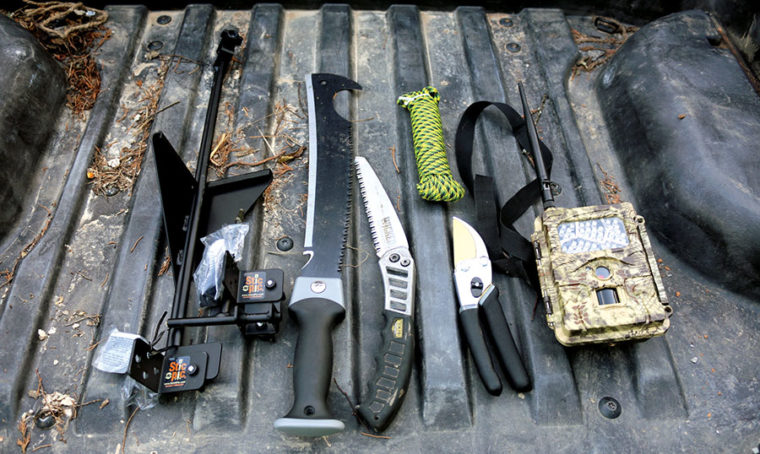 Tools Of The Trade: Good trail-camera mounts are a must. There won’t always be a suitable tree where the ideal scrape needs to be located. I take several with me. Some that screw into a tree and others that stick in the ground; A good machete, this one is a chop/saw combo. I love that curved blade on the back for making the actual scrape; A quality handsaw like those made by Wicked Tree Gear; Paracord for tying in a licking branch or holding down an existing branch; Pruners for dressing it all up when you’re done; Finally, a quality trail-camera.

Why Make a Mock Scrape?

There are many reasons why you would want to dictate where a buck makes or uses a scrape. I use them primarily as trail-camera sites to inventory bucks using the properties I hunt from early October through late December. Making a buck stop in a certain spot can obviously be useful in a hunting scenario, too, and used correctly you can dictate the route a buck will take by using multiple scrapes along that route. I’ve hunted properties that were virtually devoid of overhanging limbs, and as a result there was very little scraping activity on the property. I honestly think that during the peak scraping times few bucks used this property as a result.

Mock scrapes are also a way to make a mature buck think there is a new guy in town and potentially get him a little more active during daylight hours. I also just enjoy getting pictures of bucks working a scrape. Some of my favorite trail-camera pics are of deer I’m very familiar with thrashing a licking branch or urinating on their tarsals. As a bonus, deer I’ve never seen before show up on my mock scrapes. In 2013, I killed just such a buck that showed up on a mock scrape on December 2. I killed him near that scrape on December 16. 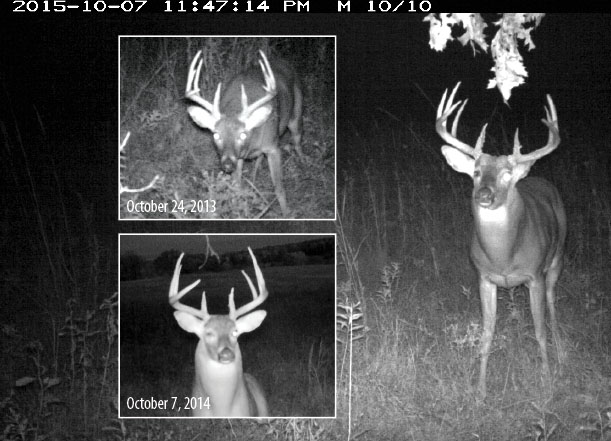 Three years of the same buck on the same mock scrape! In Kentucky we are allowed to bait. While I would get his picture on minerals in the summer, I would never get his picture on baited camera sites. Once October hit, the only place I got his photos were my mock scrapes. He lost that right eye shortly after the 2013 picture was taken.

There are many techniques for making your own scrapes. Some folks place entire saplings strapped to T-posts in their food plots. Sometimes I will pull down an existing limb and tie it in place at the right height with paracord or wire. My favorite technique is removing a limb from one area and adding it to another where there are no overhanging branches. I like this method because I can usually get the limb nearly vertical, making it more obvious, plus less likely to block the view of my trail-camera. 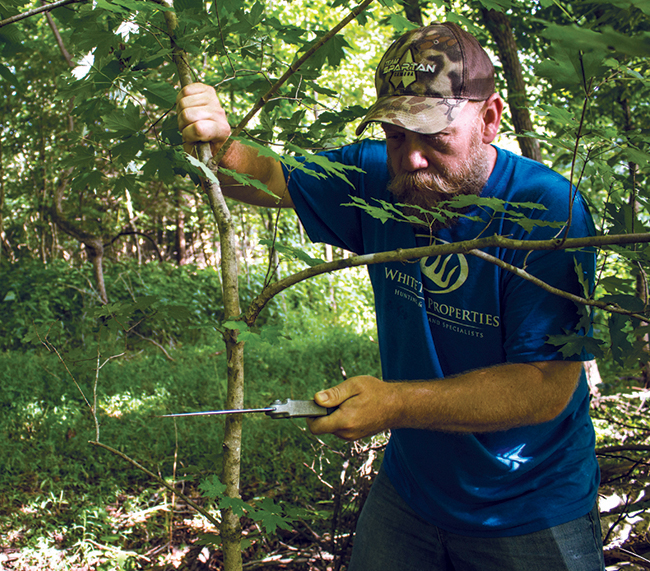 My favorite technique for creating a mock scrape is to cut a branch and move it to the right location. This maple tree is perfect.

I’ve learned that the licking branch is by far the most important part of the scrape. If you put an obvious licking branch in an area with deer, you will have deer use it. That’s a promise. I prefer to use limbs that will hang on to their leaves longer, but I’ve used everything from heavy rope, to grape vines, to bare sticks the size of my thumb. Appearance and location is the key, not the type of limb. 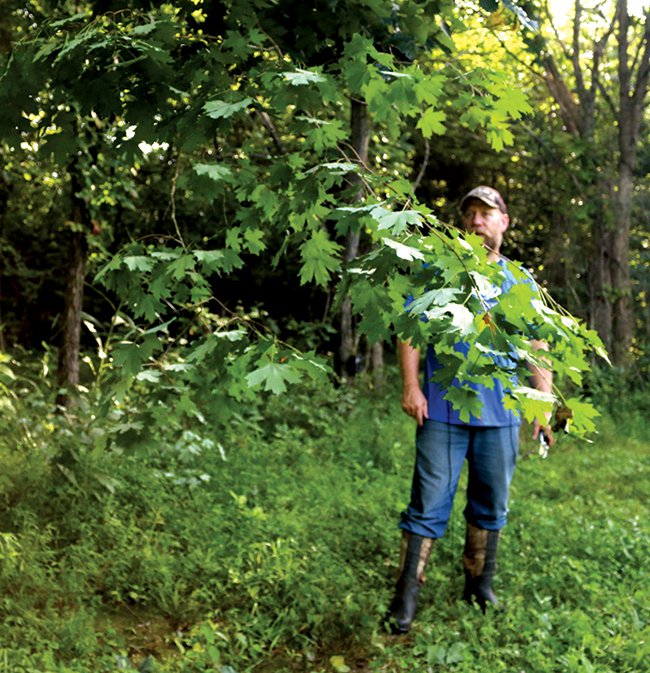 The maple sapling has now been tied to an existing branch so it hangs at about the right height. Next, you should trim it as needed.

First of all, the licking branch must be very obvious. It needs to stick out like a sore thumb and grab everyone’s attention. Hanging a limb deep in the timber where there are hundreds of similar limbs is a waste of time, but hanging a limb out vertical over a food plot where there are no other options is sure to create an active scrape. I also key in on areas like intersections of logging roads, inside and outside field corners and crop field edges – anywhere the deer can see that licking branch from a distance. When I’m using scrapes just for inventory purposes, I want them in easily accessible areas where I’m not apt to bump deer while checking my cameras. Just like when I’m hunting, if I blow the deer out of the property coming and going, I’m being counterproductive.

If I’m placing mock scrapes for a hunting scenario, I’m not likely to use a camera at that spot unless it is a cellular camera that can send the pictures directly to my phone so I don’t have to intrude to know who’s using my scrape. These cameras are becoming more and more a part of my bag of tricks. 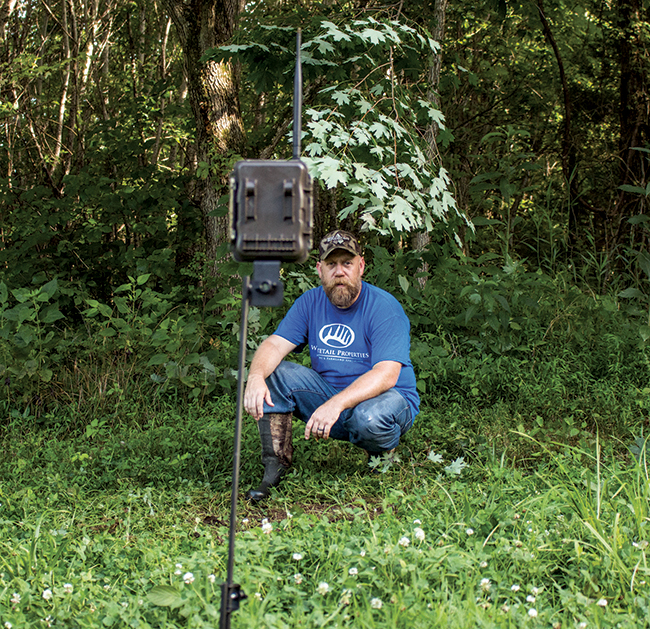 Test your camera to make sure it is in the best position for pictures. Remember, you’re a lot taller than a deer, so get down to their level.

Now, what about the actual scrape beneath the licking branch? Depending on when I make them will dictate whether I scratch up the ground. Anytime after about mid-September, scratching up the ground seems useful. Deer will work the licking branch practically all year long, but rarely do you see pawing in the ground before October 1. I typically try to match what the deer are doing. I’m also a firm believer in bigger is better, and the more it sticks out the better. Typically I’ll make the scrape about 24 inches in diameter, sometimes bigger, depending on how long I’ve got and how soft the soil is. 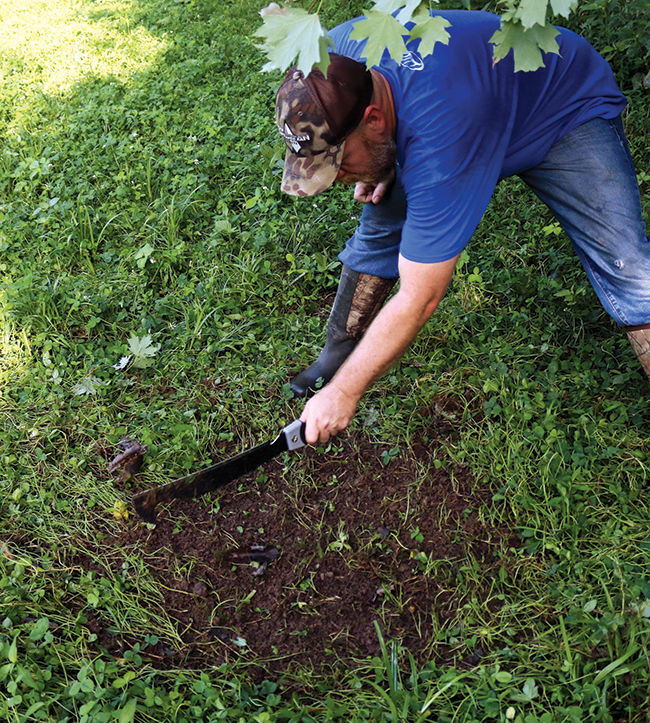 I use a machete to chop out existing vegetation and get the scrape down to bare dirt.

I’ve tried them all. Some work, some don’t, but what I’ve learned is the scent in the scrape is not nearly as important as the appearance. I rarely put scent in my scrapes or on my licking branches unless I happen to need to relieve myself, and then I use my patent-pending “MePee.” Please don’t write asking where it is sold, the supply is very limited and there is no way to deliver and maintain freshness unless you’re inviting me to come hunt with you.

The great thing about mock scrapes is they’re practically free! Many times you only need to make them once. Once the deer become conditioned to that spot, they will use it year-in and year-out as long as the licking branch remains.

This October take the time to make your own mock scrape. I promise it will be fun and rewarding, and it may even help you tag that buck of a lifetime. 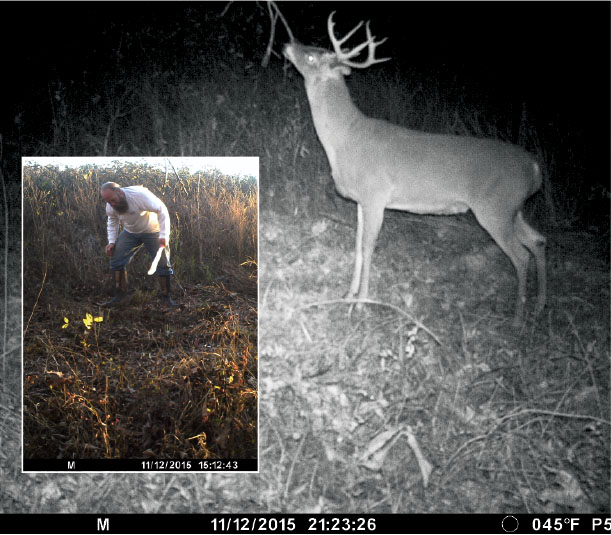 I made this mock scrape without any added scent on November 12 at 3:12 p.m. Six hours later, this nice buck stopped and added his own scent.

Dave Skinner of Kentucky is a QDMA member and Land Specialist with Whitetail Properties. He‚Äôs also a Level II QDMA Deer Steward. Dave manages 1,500 acres in south central Kentucky and spends time in the fall hunting throughout the Midwest.
View all Articles By Dave Skinner