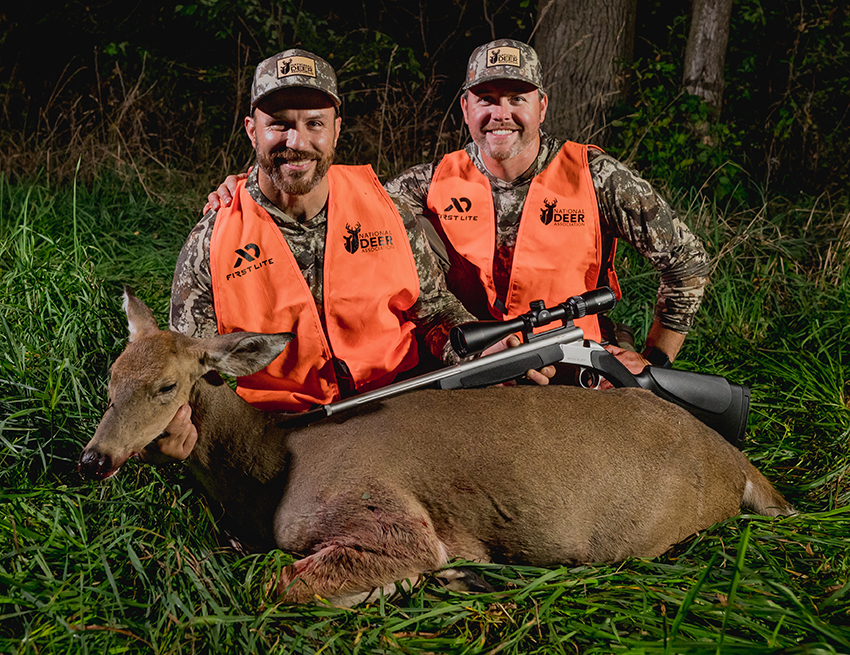 New hunter Clement Sagan (left) took his first deer ever, a Michigan doe, while hunting with his mentor, NDA member Jared Van Hees, on a 2021 Field to Fork hunt on NDA’s “Back40” property. Photo: Craig Watson

Michigan hunters routinely rank at or near the top for antlered bucks harvested per square mile (PSM) in the U.S. The national average for the 2020-21 deer season was 1.7, and Michigan more than doubled the average by shooting an astounding 3.9 bucks PSM. Antlerless deer harvest is a different story though, as Michigan hunters routinely shoot far more bucks than antlerless deer. The Michigan Department of Natural Resources (DNR) has been trying to increase the antlerless harvest to better balance the deer herd with the available food and cover, and to lower deer densities in chronic wasting disease (CWD) management areas.

The experiment concluded after the 2021 deer season with some impressive results. In the two non-APR “control” counties, hunters averaged 0.82 antlerless deer per buck. Thus, they did not increase the antlerless harvest rate at all and fell far short of the DNR goal. Conversely, hunters in the APR counties increased the harvest rate from 0.78 to 1.15 antlerless deer per buck. Thus, hunters increased the antlerless harvest rate by 48% and exceeded the DNR goal! The experiment was a huge success, and the DNR and Michigan’s hunters should be commended for their efforts.

The experiment was set to conclude following the 2021 season, but based on its success, you would expect the DNR to continue using the APRs as an antlerless deer harvest incentive in those three counties and consider expanding to additional areas. The DNR published its online deer regulations for the 2022 season on July 2, and the  new regulations remove APRs in the three counties this season. It was the DNR’s responsibility to provide the results from last deer season and their recommendations for action to the Natural Resources Commission (NRC) for public input and decision making before publishing deer regulations for the upcoming deer season. That did not happen, and we find that unacceptable.

Given the experiment’s success, NDA’s State Chapter President Erik Schnelle asked the commissioners at the July 14 NRC meeting to put up for public input and discussion five suggested actions including a one-year extension of APRs in the experimental area. The NRC declined to advance any resolutions or amendments regarding the deer regulations or the CWD experimental area. There was no justification given, only the statement that “We will revisit this next year.” By doing this, the commission denied hunters and stakeholders a chance to have their voices heard, did not appear to use the best available data, did not appear to make an informed decision, and did a disservice to Michigan’s hunters and deer herd.

This is not how the process is supposed to work. The deer herd deserves better. Deer hunters deserve better. All of Michigan’s wildlife enthusiasts deserve better. The NRC will meet again in August, and NDA and our Michigan State Chapter are calling on the DNR and NRC to correct this disservice by advancing proposed regulations designed to meet DNR antlerless harvest goals, allowing an opportunity for public comment, and then using the best available science to approve the 2022 deer season regulations.