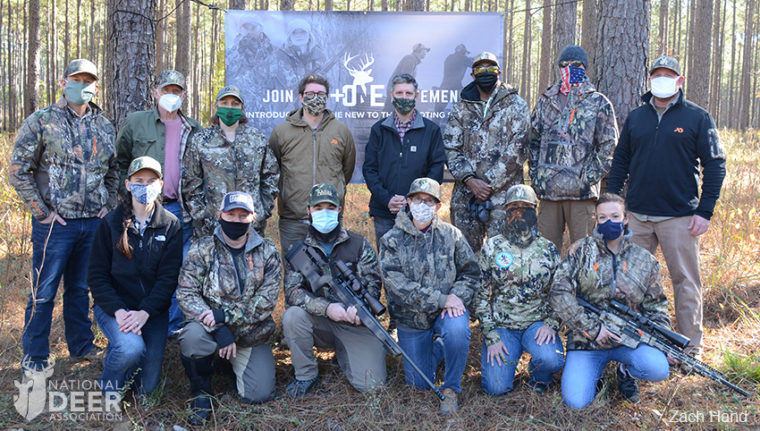 The National Deer Association’s Field to Fork program has discovered an untapped reserve of adults who are interested in deer hunting but need an invitation and a helping hand to get started. One of the most easily reachable sources of these new hunters is surprisingly close to the hunting world: employees of the firearms and hunting industry. We first drew attention to this opportunity in 2018 when our First New Hampshire Branch, in partnership with the National Shooting Sports Foundation (NSSF), hosted 21 first-time hunters and employees of Sturm Ruger & Co. and SIG Sauer firearms manufacturers.

On December 5-6, we continued that effort with a hunt for employees of Georgia-based firearms manufacturer Daniel Defense. Once again, NSSF provided a Hunting Heritage Trust grant to support Field to Fork, as it matches up well with their +ONE Learn to Hunt initiative. While some of these Daniel Defense employees build hunting rifles for a living, or work in other areas of the business, they’d never had the opportunity to hunt deer with the help of experienced mentors to get them started. 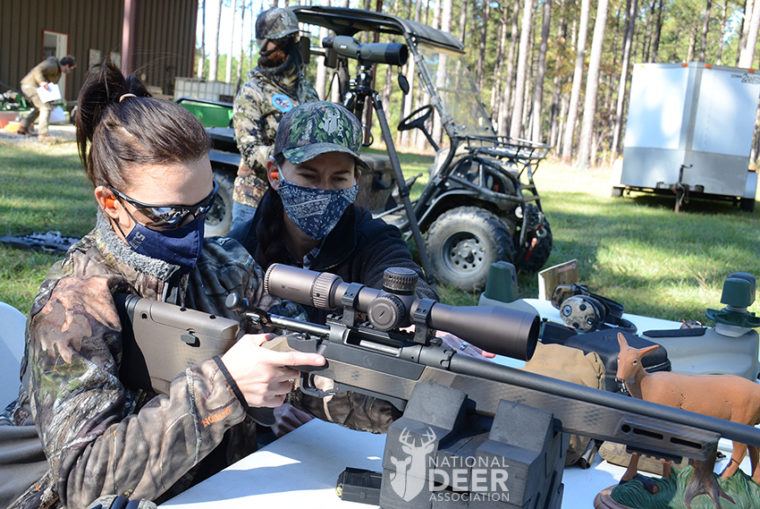 Krisha Whiting, a veteran Field to Fork mentor and NDA volunteer, helps Leah Thomas of Daniel Defense check the zero on her Delta 5 in 6.5 Creedmoor. 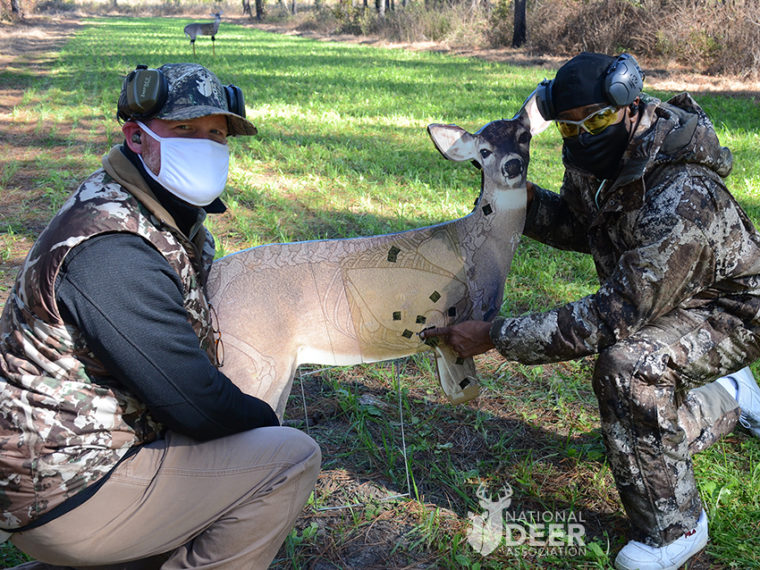 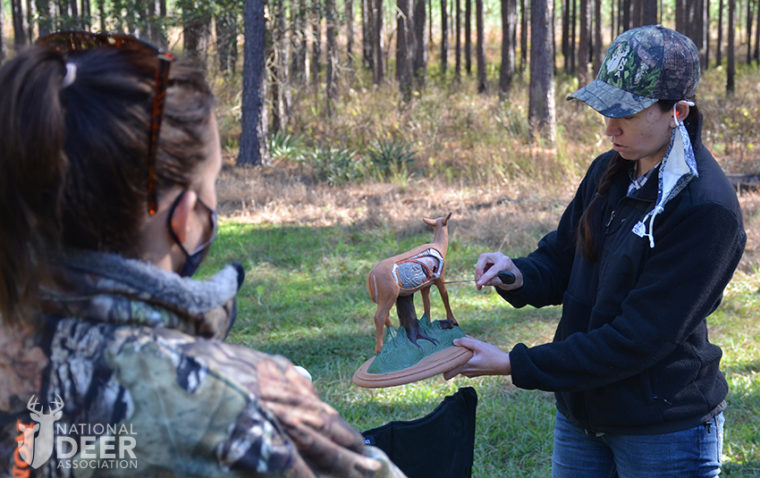 All hunters had completed the NDA Deer Hunting 101 online course prior to the hunt, but Krisha Faw gave a refresher on deer anatomy and shot placement for all hunters and mentors.

While COVID-19 made it more difficult in 2020 to hold gatherings, we managed to go forward with a small, socially distanced hunt for five Daniel Defense employees and five NDA volunteer mentors on beautiful private land managed for maximum wildlife and conservation value not far from Daniel Defense headquarters in southeast Georgia.

The five hunters prepared for the event in advance by taking their online hunter safety courses and also completing the Deer Hunting 101 course, the official NDA Deer Hunting course. Each had also practiced with their rifles, but a refresher practice round took place on site before the hunt began so that each hunter and their mentor could check shot placement together. Daniel Defense armorer Jason Land also attended to help with final adjustments on all guns, which included Delta 5 bolt-action rifles chambered in 6.5 Creedmoor and DD5 AR-10s chambered in either 6.5 Creedmoor or .308 Winchester. Volunteer Krisha Faw of Georgia, a wildlife biologist and experienced Field to Fork mentor, reviewed shot placement tips for deer. 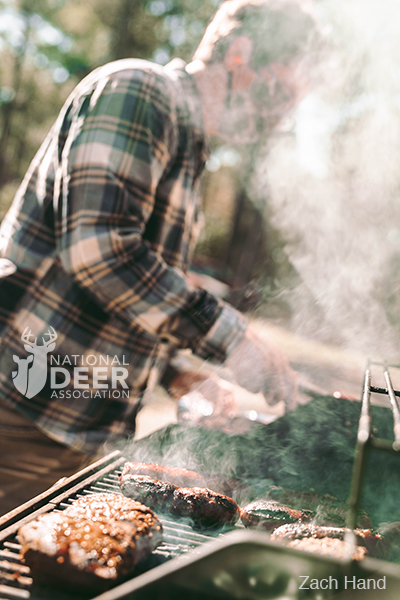 NDA’s Hank Forester grilled up venison sausage and backstrap for lunch on Saturday while the hunters and mentors checked rifles.

Food is a major aspect of every event in the Field to Fork program, so NDA Director of Hunting Heritage Hank Forester grilled venison sausage and backstrap for Saturday’s lunch followed by venison chili for dinner that evening. Fortunately the weather was clear for eating outdoors. 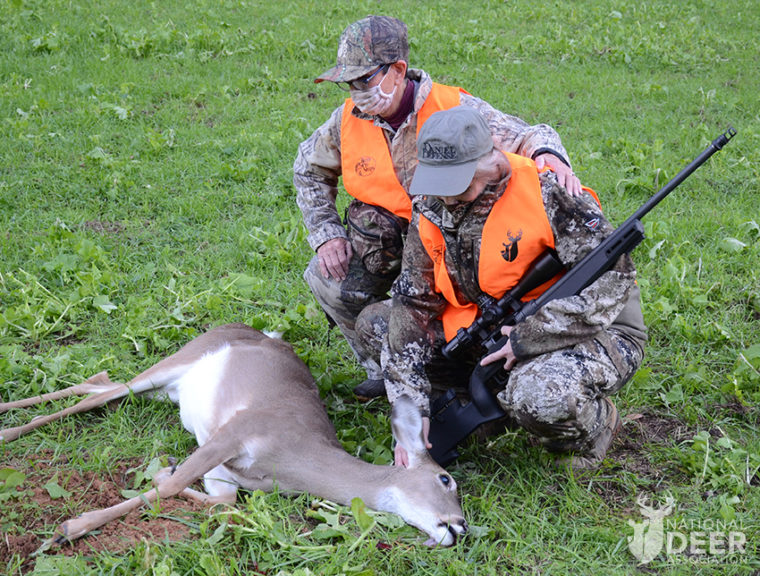 Dawn Devereaux fired the first shot of the hunt and took her first deer while hunting with mentor Rita Copeland. Rita said the experience of being with Dawn to get her first deer was more exciting and memorable than when she gets a deer herself. 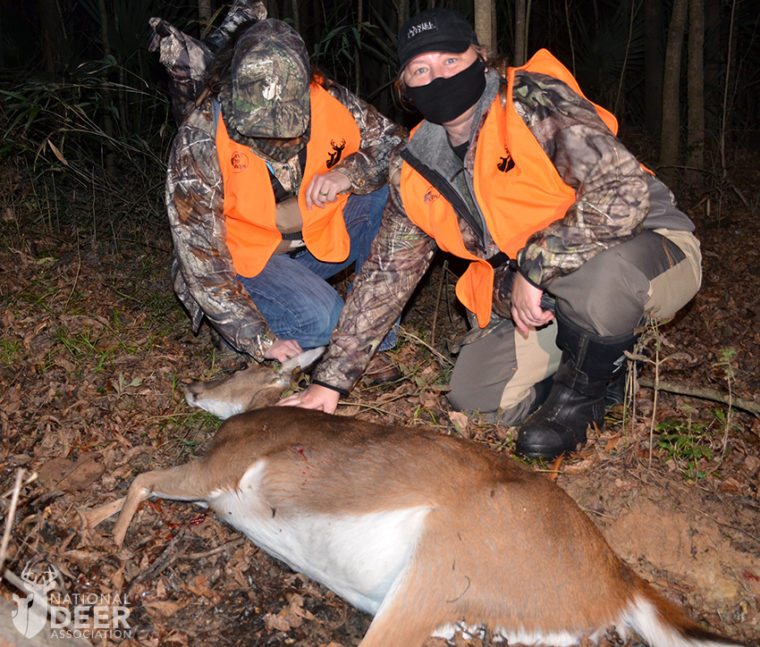 Corinne Raines (right) got her first deer later in the afternoon while hunting with mentor Olivia Menard.

Over an afternoon and morning of hunting, all of the hunters saw deer, turkeys and other wildlife, and three of the five hunters took their first deer ever. NDA Chief Communications Officer Lindsay Thomas Jr. showed the hunters how to dress, skin and quarter their own deer through guided instruction and hands-on experience. 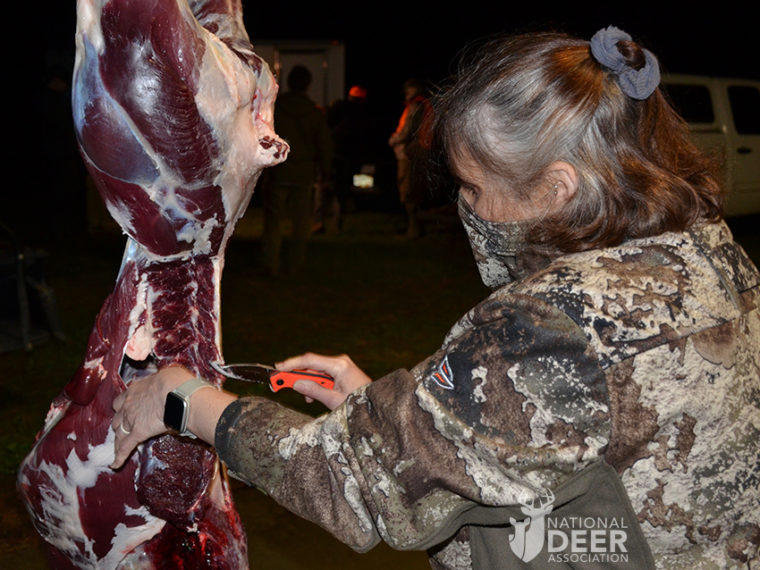 With a little guidance from NDA staff to get started, Dawn Devereaux took quickly to processing her own deer. Here she cuts out her first venison backstrap.

The National Deer Association looks forward to working alongside the NSSF to encourage more hunting industry companies to look within their own employee rosters to recruit new deer hunters. If you work in the hunting industry and would like to plan a hunt, contact Hank Forester, NDA Director of Hunting Heritage, or NSSF’s Director of Research and Market Development Jim Curcuruto. 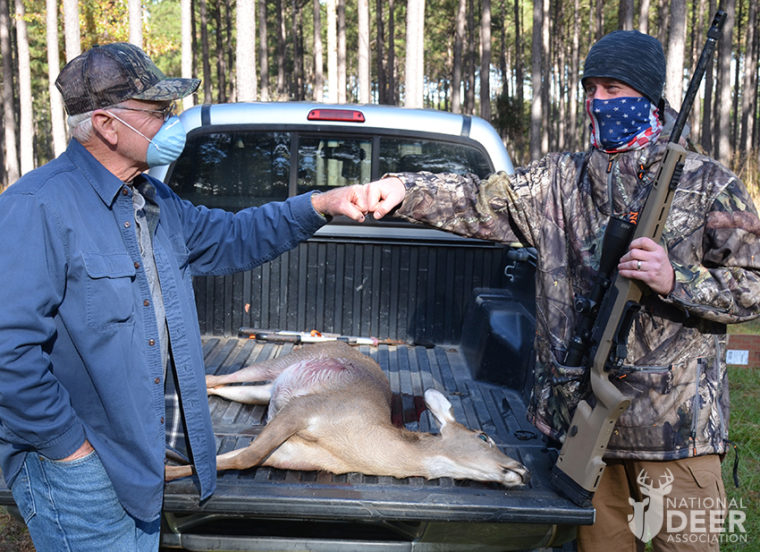 Mentor Kenny Copeland (left) guided first-time hunter Ron Golden to his first — and second — deer. Ron got a doe on the first afternoon hunt and a second doe the next morning (shown here). Kenny, a lifelong hunter, said he wished he hadn’t waited until age 70 to experience mentoring another adult on their first deer hunt.

NDA would like to thank all of the volunteer mentors, the property managers and owners, and the NSSF for their support and participation in this event. We look forward to taking more hunters to the woods! Become a member of NDA today to help support programs like Field to Fork.