Now You See Him: 9 Things We Know About Deer Excursions 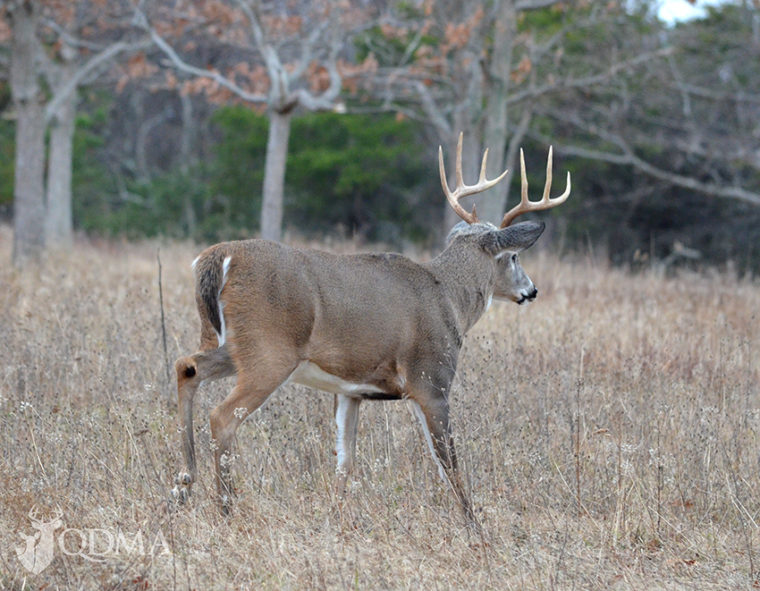 Nothing about whitetails ever seems routine, does it? Just when you think you’ve got ‘em figured out, they seemingly throw another curve ball in the grand scheme of World Series play we call “hunting.” But that lack of certainty and the challenge that comes with it is a big part of why deer hunting is so darn enjoyable. It is not easy, and we have to try our best to decode what the third base coach is signaling when he pulls his ear lobe three times and rubs his belly counterclockwise.

However, we can certainly learn from experience and apply science (insert #deernerd here) to better understand deer for both management and hunting purposes, allowing portions of our field-of-view to become more in focus about how they live.

One thing researchers have deciphered in recent years using GPS technology is a somewhat new behavior that white-tailed deer do called an excursion, which is a brief trip or trips outside their established home range.

Think of these movements like a person going on vacation. Your normal routine likely takes you from home to work and back again daily, then throw in the various other locations you frequent within your community. The grocery store. Church. Sporting events. Your favorite restaurants. All of these combined make up your home range. Then, once a year you may go somewhere vastly different; maybe a warm climate with the family because it’s cold at home, somewhere cultural, or perhaps an adventure hunting-trip you saved for. Whatever it is, the destination is well outside your norm of travel.

In essence deer do the same sort of thing. Every once in a while, they go on a vacation.

The crazy thing is that prior to about 15 years ago we didn’t know excursions even occurred. Yet they have now been documented across various landscapes, in different age classes, and just about year-round; but, as you may expect, there seems to be a pretty big spike in this type of movement during the rut. Unfortunately, there is no way to predict when and how far a particular deer will go.

Let’s go on a trip together in an attempt to make some sense of what we know about deer excursions today, including who’s doing them, as well as how often and how far they’re going:

You may assume that just bucks are going on excursions. Not so. Scientists have observed this type of movement in both bucks and does! In one Pennsylvania study, five of eight collared adult whitetail does went on an excursion, and in a Tennessee project researchers documented a rare case where both a collared doe and buck within the study area left their respective yet separate home ranges and met up somewhere in between the two during an excursion that each was making (caution: this may or may not be the first booty call ever recorded in the deer world). Both of these projects occurred in November.

Not just for Mom and Dad

Interestingly, excursions have been found to occur in all age classes. A recent study out of Illinois found that 1½-year-old bucks had a 78% chance of going on an excursion during that first year of adulthood. Now, if you know much about deer biology you also may know that most (50 to 75%) young bucks between 12 and 18 months of age permanently disperse from where they were born. The excursive movements in this study were different from dispersal because they actually returned to their natal range. What’s more, compared to when the same study animals eventually dispersed, their excursions were differentiated by also being faster, shorter and having a more complex path. The lead authors surmised that these excursions could have been failed dispersals in an attempt to learn about what was outside their home range.

At this point excursions have been documented in just about every landscape and region in North America. Studies with GPS-collared deer have been performed in rich agricultural areas, heavily forested and mountainous terrain, grasslands, the brush-country, mixed landscapes and suburban fringes. They’ve been seen regularly in the Northeast, Deep South, Mid-Atlantic and Midwest. In addition, not only is it apparently a ubiquitous behavior regionally and among sex and age classes, it also seems that no property, scale or intensity of management is immune. Researchers have shown that excursions happen even on well-managed properties with high-quality habitat. (mental note: “Excursions happen” would make a great bumper sticker!)

With an increase in technology and the ability to have collars on deer for much longer time periods, as I mentioned earlier excursions have been found to occur basically any time of year. However, when amassing numerous projects and analyzing them as a single, large data set, it appears there is a slightly higher probability deer go on excursions during the breeding season, or rut, compared to other seasons. Moreover, each study that was ongoing during the breeding season showed a marked increase from pre-rut to peak rut and a significant decrease from rut to post-rut. 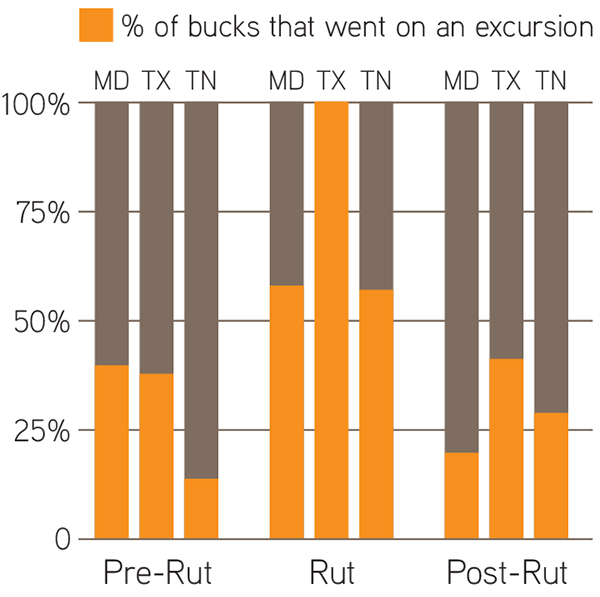 Since I know many of you reading this are particularly interested in statistics related to buck excursions, here are some neat metrics that researchers have recorded as to what is likely the average situation around the country. Think about all of those times during the rut you got a one-time glimpse of a buck while hunting and never saw him again. Or, maybe a single-appearance trail-camera image in late October that has you falling in love and breaks your heart all at the same time. Many of these instances may be explained by a buck in the midst of an excursion.

When analyzing the available data from six studies performed in six different states on 182 collared bucks from 2011 to 2014, it appears roughly half of the study animals had the tendency to go on an excursion at some point in their lives. That means roughly half never went on one. However, these studies had collars on bucks during different times of the year. In fall, when bucks are engaged in breeding behaviors and when you’re likely out spending the most time hunting, the average was closer to 60% of individuals that went on an excursion.

Building off the last point, of those bucks that did go on an excursion, at least half of them went more than once during the study periods observed. This was slightly higher (57%) in the fall as well.

One Maryland study was able to track the proportion of excursions that happened during daylight versus night and found their study animals went from doing it 85% of the time in the dark during pre-rut to 70% of the time during the day during peak rut. Wow! The ones that survived then flipped back to going on excursions mostly at night again (70%) in the post-rut and after.

How far did they go, you ask? Of those 182 collared bucks, the average distance traveled was roughly 1.5 miles away from their home range. However, there was a lot of variability in that data and ranged from a quarter of a mile to 8 miles away. When taking into account the total path traveled, one buck covered almost 25 miles!

How long were they gone? The same study animals on average were outside their home range for 16 hours. But that ranged, too, from two hours to several days. The variance in both distance and duration says that even though a lot of deer go on excursions, the motivation to go, season and individuality of the animal all play a role in what that excursion ultimately looks like.

As an avid hunter, I know how important it is to stay on top of the latest in deer research because it simply elevates your chance of being successful. That’s one of our main goals here at NDA. We want you to be as successful, that’s why we say that NDA “blends the art of hunting with the science of management to create better deer and better deer hunting.”

If you don’t already get it, make sure to sign-up for our weekly e-newsletter, it’s always filled with the kind of info that will increase your odds. And if you aren’t an NDA member, join!

I hope this information allows you to stay on stand a little longer this fall when it counts. After all, we want to see more grand slams and less K’s.