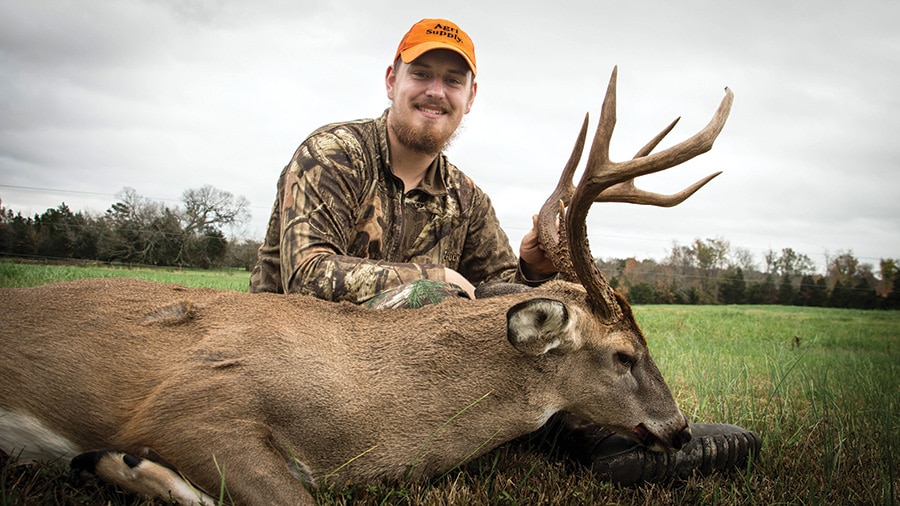 As the buck edged along the creek, I tried to get a better glimpse of him. I had yet to see his body well enough to put an age on him. He turned toward me, thrashing a small sapling. I decided to call him over for a better look. Five or six years ago, I have little doubt he would have died as soon as I laid eyes on him. However, since I began adhering to Quality Deer Management (QDM) principles, all of that changed. In fact, it is likely the first connection most hunters have to QDM is allowing young bucks to grow.

I try to keep track of different deer on our family farm in North Carolina, and it is interesting to see deer blossom if you allow them to reach maturity. Long term, we hope the deer will grow and we will be able to harvest them when they are older and likely have larger antlers. However, being the impatient type, I also desire to see more immediate benefits when I let a nice young buck walk away. On a recent hunt, I was able to see those benefits unfold in mere minutes.

The morning of November 6, I was posted high in a poplar tree with my muzzleloader, overlooking a classic funnel. Two blocks of timber were connected by an 80-yard-wide strip of woods with a creek in the center of it. Nearly any deer that walked through the funnel would be within 30 yards of me the way things were laid out, and thick brush meant deer would feel comfortable moving later into the morning. The only downside to the setup, however, was that it required walking through a hayfield to enter the stand. I waited until first light then slowly stalked through the field, glassing carefully as I went. Coming around a corner, my cameraman, Moriah, whispered to stop. Looking up, I saw a 2½-year-old that we knew well on this property glance up at us. He moved along, and we continued to the tree.

Two hours after daylight, my hopes were dwindling. I personally struggle on morning hunts to remain confident in a set where I am not seeing deer, especially when I am wearing only base layers in November due to the heat. With that being said, it was still the rut, and anything could happen. As I was whispering back and forth with Moriah, I glanced up and saw a nice deer on the other side of the creek. We both got on him but could not decide what to do. I grunted to stop him, and we went back and forth on age. We were still unsure as he started to walk off. I pulled out my rattling antlers, hit them together, and he quickly trotted back to within 20 yards of our tree, looking for the source of the fight. As soon as he crossed the creek and came into clear view, we both agreed that he was 2½. He soon disappeared, and we were left with the slight disappointment that comes from realizing a deer is not a shooter. About ten minutes later, a spike repeated the routine, and it seemed buck movement might still be good despite the weather. A few minutes after that, Moriah whispered with a quivering voice that he saw a big buck.

Deciding when to shoot and when to pass can be one of the biggest struggles in Quality Deer Management. Obviously the first step is deciding on an age class for which to manage. QDMA teaches hunters to begin with realistic expectations and gradually move up, with a reasonable starting point being the protecting of most or all yearling bucks. On our farm, we currently feel that 3½ years old is a realistic expectation, so knowing the difference between a 2½- and 3½-year-old buck is crucial. After a certain period of time, however, I feel an instinct is developed by each hunter. When in doubt, I don’t pull the trigger, but when I start shaking like a leaf, there is no doubt in my mind the deer is “mature.” While different for each hunter, for myself this is simply because I have gradually moved up in experience and no longer desire to shoot a yearling or 2½-year-old buck. It is important not to let emotions cloud decision-making, but at times they can be a guide as well. Whether a deer is a shooter or not can generally be decided within the first few seconds of seeing him.

I began frantically looking, searching for the deer to try and decide whether to shoot. I tried to locate the buck through whispering with Moriah, but in his excitement he failed to explain that the deer was standing a mere 20 yards away! The damp leaves had masked his approach, but I was finally able to lean out far enough around the tree to catch a glimpse of the buck. A shot of adrenaline rushed through my body as soon as I laid eyes on him. He was a mature 7-point, not the largest antlered deer in the woods but definitely meeting our age minimum. He walked down the creek bank and shook a blackberry cane off his rack. I could not have imagined a more peaceful scene, minus the pounding of my heart. When he gave me enough of an angle, I cocked the muzzleloader and made sure Moriah was on him. After the smoke cleared, we saw that he was down only 40 yards away.

QDMA teaches hunters to begin with realistic expectations and gradually move up, with a reasonable starting point being the protecting of most or all yearling bucks. On our farm, we currently feel that 3½ years old is a realistic expectation, so knowing the difference between a 2½- and 3½-year-old buck is crucial.

As I approached the buck, I had instant confirmation that I had made the right decision. He had the large, boxy frame of a mature deer, and he had the antler mass to go with it. The first camera interview was rough, as I was short on words from excitement.

By jawbone age, my buck was 3½, and he weighed 165 pounds. While skinning him a few hours later, a thought entered my mind: What if I had shot the first deer I had seen? I would not have been happy with the deer, and I would have missed out on an awesome opportunity less than a half hour away.

On top of that, I think about the things I would have missed on other hunts earlier this year. Events such as young bucks grunting and rubbing trees and a turkey flying up to roost. Shooting the first deer that comes into sight certainly does not allow for full enjoyment of Creation, and my hunts are now memorable for more reasons than blood on the ground. Patience to wait for a mature buck simply makes one more knowledgeable about the woods.

Although it may be tough, I urge everyone to ask this critical question before you pull the trigger: Is this really a deer I will be proud to take? By doing so, your chances of seeing and harvesting more bucks that meet your age goal will likely increase, both now and into the future, and your hunting experience will be all the richer for it.

Mark Turner is an NDA member and Level 2 Deer Steward who is currently a Ph.D. candidate at the University of Tennessee working under the direction of Dr. Craig Harper. His research is investigating how nutritional carrying capacity and land use influence deer body and antler size across the eastern United States. Instagram: @markturner442