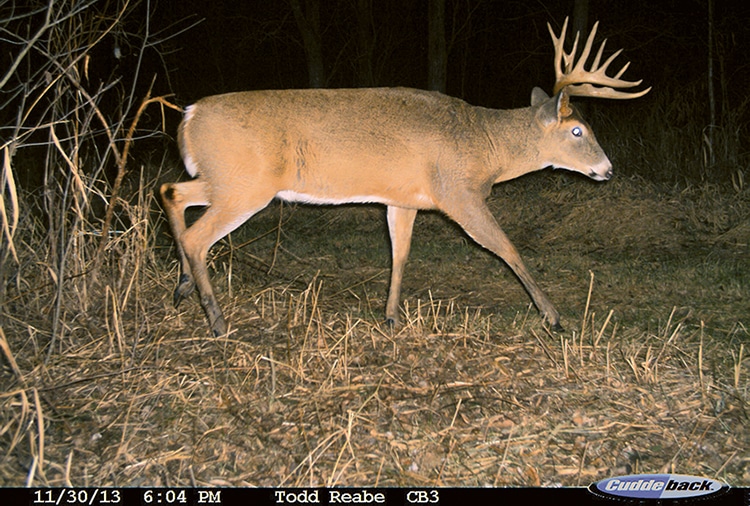 When you harvest a doe late in a hunting season, you can measure any fetuses the doe is carrying using a special scale and determine when they were conceived. With enough fetal measurements, you can dial in on the timing of the peak of deer breeding where you hunt. But this method requires you to have access to late-season doe harvest and enough fetuses. Not all of us do.

There is another way to get at this information, and all you need are some trail-cameras. Michael Biggerstaff, a graduate research assistant at the University of Georgia, is finishing a multi-year study that suggests passive trail-camera monitoring will reveal peak breeding through the appearance of adult bucks in photos.

“I wanted to find a practical way for the average hunter to track the peak of the rut,” said Michael. “I wouldn’t say we’ve found a new method, because we’re still testing, but it can definitely give you more evidence than you already had.”

Michael and his colleagues used a 2,500-acre study site that is part of a larger research forest in Georgia. He established a grid of 50-acre blocks and placed a camera on a deer trail as near to the center of each block as he could. Fetal conception dates at this study site had already established a range of annual breeding dates from November 1 to January 31, with peak breeding in December, so Michael started camera monitoring in September.

“Passive” monitoring was important to capture a large sample of the entire deer population without bias – the camera sites were not baited, and deer did not have any reason to be at the sites other than natural movements.

With 88,409 photos at the end of the first monitoring season, Michael charted the rate of camera detections for deer sorted into fawns, does, yearling bucks, and all “adult bucks” estimated to be age 2½ or older. Then he compared activity levels with known breeding dates, and he saw no relationship for fawns, does or yearling bucks. But activity patterns of adult bucks closely matched the distribution of breeding dates and peaked at the same time (see the graph below).

“Our results suggest that activity patterns of adult bucks may be used to estimate the timing of the peak rut – but not those of yearling bucks, does or fawns,” said Michael.

Previous research by Michael’s professor, Dr. Karl V. Miller, showed that scrape activity peaks earlier than breeding dates, so trail-camera monitoring of scrape sites would likely give a biased view of the peak rut. Passive monitoring of trails or other travel corridors is needed to measure overall movement rates of adult bucks. Michael measured his rates in camera detections per hour, but detections per day would work as well. While you may not be able to achieve a camera per 50 acres if you hunt a large property, you can distribute cameras evenly where you hunt, or monitor a sub-section of land to look for a peak in adult buck movement.