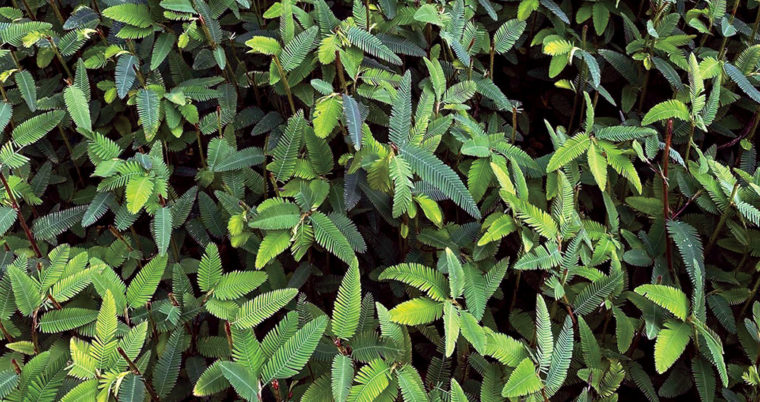 Annual warm-season food plots are commonly recommended to address nutritional limitations when bucks are growing antlers and does are lactating. Warm-season plantings also provide forage during the late-summer stress period in the South prior to cool-season forages becoming available. Additionally, warm-season plots provide a great source of attraction until frost, providing early-season bowhunting opportunities. But despite all of these positive attributes, there are several common problems that limit their utility to many food-plotters.

First, the majority of warm-season food plot plantings are sensitive to early grazing pressure. Additionally, several warm-season plantings require either tillage or the use of a no-till drill to plant, limiting their use for managers who lack large planting equipment.

From the middle United States and southward, there is a warm-season planting able to fill these gaps: American jointvetch (Aeschynomene americana). Jointvetch is highly selected by deer and provides in excess of 20% crude protein from mid-summer until it is killed by frost in fall. The long period of availability makes it a great choice throughout the South where it can be planted relatively early in March or April.

Grazing pressure is one of the major concerns that managers face with warm-season plots. Whether you have limited food-plot acreage or a high deer density (or as is often the case, both!), many managers have problems establishing plantings of soybeans, cowpeas, or other warm-season mixtures. It can be frustrating trying to provide forage during the summer when overgrazing is a problem, and many managers employ fences and deer repellents to give their plantings a chance to establish. Considering other forages provides an opportunity to plant warm-season food plots that might otherwise be overgrazed soon after planting.

Jointvetch resists grazing pressure better than most warm-season forages, even in plots smaller than 1 acre. The downside to jointvetch is the time it takes to establish, as it does not provide substantial forage production until a few months after planting. One option to provide forage earlier is to mix jointvetch with a forage that establishes quickly, such as cowpeas. For example, a full seeding rate of jointvetch at 20 lbs./acre PLS (pure live seed) can be mixed with 25 lbs./acre PLS of cowpeas for an effective mixture. This mixture provides early forage from the cowpeas as well as the grazing resistant jointvetch later in summer. When planting this mixture with conventional tillage, the cowpea seeds should be either drilled or covered by disking. After planting the cowpeas, cultipack the field, broadcast the jointvetch, then cultipack again. 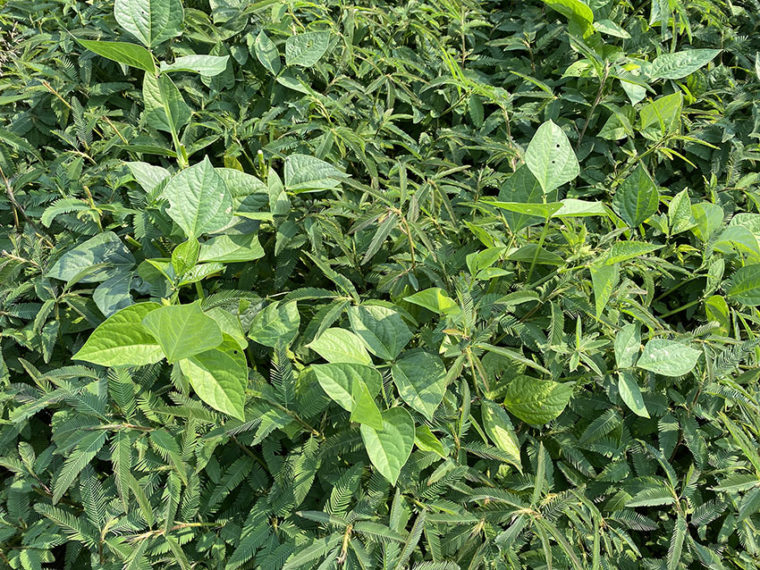 Jointvetch can be mixed with a half rate of cowpeas to provide outstanding forage throughout the growing season that is also extremely resistant to overgrazing.

In many states, bow season opens prior to the major attraction period for cool-season plantings. Deer may be attracted to some perennial food plots during September, but warm-season food plots provide maximum attractiveness during this time. Unfortunately, most managers have difficulty providing effective bowhunting setups over warm-season plots. Large soybean plantings certainly attract deer, but it is more difficult to get shot opportunities when hunting larger fields where soybeans may be grown successfully. For many small-acreage managers, plots more suited to bowhunting may be difficult to access with large equipment that is necessary to plant larger seeds. Jointvetch is another great option to plant in small, remote food plots for bowhunting attraction.

In small food plots, jointvetch fits the bill as the perfect early-season attraction for a couple of reasons. I’ve already discussed the ability of jointvetch to resist overgrazing when planted alone or in a mixture, but the option to plant jointvetch via no-till top-sowing makes it an excellent option for small food plots. Most warm-season plantings feature large seeds that must be covered at least 1 inch for successful germination, but jointvetch seeds are similar in size to clover seeds. Thus, jointvetch seeds do not require deep planting, and are one of the few warm-season forages that can be successfully established with no-till top-sowing.

To plant jointvetch in small plots without large equipment, simply spray the existing vegetation with a broad-spectrum herbicide such as glyphosate. After the vegetation dies, 20 to 25 lbs./acre PLS of jointvetch can be no-till top-sown into the plot and allowed to establish.

Some tend to shy away from jointvetch because the seed is relatively expensive (about $100/acre). However, this cost is relatively comparable to a soybean planting at a high seeding rate to counter heavy grazing pressure, or a normal seeding rate of a glyphosate-tolerant forage soybean. Considering how many acres of soybean food plots are reduced to stems by the time deer need them, jointvetch could be considered economical!

The slow initial establishment of jointvetch makes weed control important, especially early in the growing season. The use of preemergence and postemergence selective herbicides allow for effective control of many major weed problems in jointvetch planted alone or in a mixture with cowpeas. Preemergence applications of imazethapyr are effective at reducing grass and broadleaf weed problems early, which provides jointvetch an opportunity to establish. A single preemergence herbicide application may be all that is necessary, but if annual grasses become problematic, a grass-selective herbicide such as clethodim may be applied. Note that it is not recommended to mix grasses – such as grain sorghum or corn – with jointvetch, as annual grass weed control is often necessary for successful jointvetch establishment.

Jointvetch is a versatile warm-season option that more hunters and food-plotters should consider. If you are looking for a warm-season planting that can be used in smaller plots and established with no-till top-sowing, jointvetch likely fits the bill for you!