Donnie Draeger used to believe in culling deer to improve antler genetics. Over his career as the wildlife biologist at the Comanche Ranch in southwest Texas, he’d spent a lot of time and the ranch’s money on such efforts. Then the results of a years-long scientific culling study at the ranch started to become available. Donnie no longer recommends culling on the Comanche Ranch, and he urges all deer hunters to stop culling as well.

“Culling” in the deer-hunting sense is the idea that removing bucks with less-than-desirable antler characteristics for their age will increase antler quality of future bucks by changing the genetics of the population. To test this idea, Donnie and his co-researchers – Dr. Charlie DeYoung, Ph.D. student Masa Ohnishi, and Dr. Randy DeYoung of Texas A&M-Kingsville and Dr. Bronson Strickland of Mississippi State University – set up three areas on the Comanche Ranch for study. They included an “intensive” culling treatment area (3,500 acres), a “moderate” treatment (18,000 acres), and a “control” area where no culling would be performed (5,000 acres). Other than size, the three areas were similar in habitat and herd characteristics.

Each fall from 2006 to 2015, researchers used helicopter net-gun crews to capture bucks in all three treatment areas (this area of southwest Texas is virtually treeless brush country where aerial capture is feasible). Researchers estimated each buck’s age based on tooth replacement and wear, collected a DNA sample, measured the antlers, and inserted a microchip PIT tag in the ear.

Firing nets from a helicopter is an effective capture method in southwest Texas. More than 2,500 unique bucks were captured for the study, most of them multiple times across several years of research.

For seven of these years, captured bucks in the intensive and moderate treatment areas that did not meet the respective culling criteria were sacrificed under scientific research permits issued by the state. The rest of the bucks were released, including all bucks captured on the control area. In all, 4,264 captures were made of 2,503 individual bucks (many were captured in multiple years), and 1,333 of those bucks were culled.

These were the culling criteria used:

Moderate (18,000 acres): 3½- to 4½-year-olds with less than 9 points and all bucks 5½ or older scoring less than 145 gross Boone & Crockett inches were culled (the same criteria as the intensive treatment except no yearlings or 2½-year-olds were culled in this area).

Control (5,000 acres): No culling at all. All captured bucks were evaluated, tagged and released.

The stringent culling criteria in this area of the ranch resulted in predictably extreme culling. Each year, 85 to 100 percent of yearlings captured in this area met the culling criteria, even though DNA studies ultimately revealed that many of them had fathers that were not cull bucks.

“Culling yearlings with less than 6 points essentially crashed the buck population,” said Donnie. “The intensive criteria equated to a 93 percent cull rate of every yearling we captured. When you add in natural mortality factors like predators and drought, we were basically removing recruitment. The population couldn’t compensate through reproduction.”

What had been a 1:1 ratio of bucks to does became 1:6 before the culling was over. Even though bucks that remained in the intensive treatment area had large antlers for their age, there weren’t enough of them to breed all the does on their first estrus cycle during the normal peak of the rut. Average conception dates started falling later and later, which led to more late-born fawns, which had less time in their first year to grow, so they ended up with smaller bodies and antlers for their age.

“We created our own negative feedback loop,” said Donnie. “Even though a fawn might have been genetically superior, their bodies couldn’t express that potential because they were born late, and they ended up getting culled anyway.”

Without culling yearlings and 2½-year-olds, the moderate treatment did not produce the negative effect on the buck:doe ratio that led to cascading effects on fawn birth dates in the intensive treatment. But after seven years of culling was complete, no evidence emerged of successful genetic change.

If culling was having the intended effect of improving antler genetics among bucks, then the proportion of bucks captured each year that met the culling criteria would be expected to decline. But the proportion did not change in either the intensive or moderate treatment areas.

“If you claim that culling is working for you, but you don’t have a control area for comparison, you have a hollow statement. That’s just your guess as to what’s causing the improvements you’ve seen.”

The average Boone & Crockett score of the standing crop of bucks in the moderate area was the same as it had been at the outset. That was also true in the control area. Despite one area being subjected to high-tech helicopter capture and culling for seven years, overall antler quality in that area remained the same as in the study area where zero bucks were culled.

Why It Didn’t Work

The Comanche Ranch study is the second major study of wild Texas deer to find that culling was ineffective. Dr. Mickey Hellickson’s King Ranch study also found no change in antler quality after many years of intensive culling. But Comanche’s more recent study had something the King Ranch study did not: DNA analysis.

Through DNA, Masa Ohnishi and Dr. Randy DeYoung were able to connect offspring to 963 buck fathers and build family trees of relationships for immediate relatives (fathers, sons and brothers). By studying these family connections in combination with the known antler measurements for each buck in the tree – for some of them across multiple years – the team established a “breeding value” for individual bucks: a buck’s genetic value based on the antler quality of its offspring relative to the average for the population. A buck that produced offspring with above-average antlers for the population earned a higher breeding value, and vice versa. 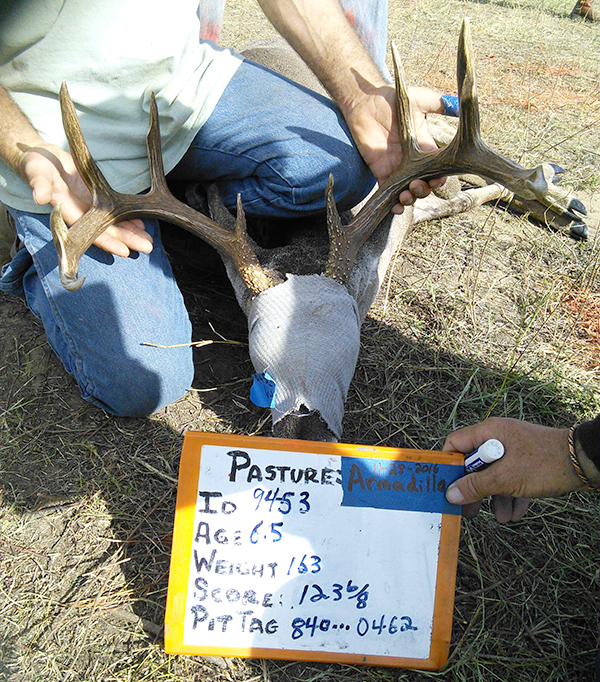 This buck had the highest “breeding value” out of 2,503 bucks in the study, meaning he produced large-antlered offspring. But his own antlers were only average. He grossed 123 inches at age 6½.

High-quality bucks with high breeding values represented such a small portion of the population that, even if you could somehow cull down to those deer, you would produce the effects of the intensive treatment.

“You would drive the buck herd into local extinction,” said Donnie.

What About The Environment?

In arid South Texas, rainfall is critical in deer management. Forage quality and quantity can swing drastically from year to year with rainfall amounts and timing, and therefore so can reproduction and antler quality for deer. Was this a factor in the Comanche Ranch study that might mean culling could still work in areas with more stable rainfall and forage abundance? Donnie said, “No.”

Some year-to-year changes in antler quality during the study seemed to be linked to rainfall. In the seventh year of capture after culling began, the average antler size for 3½-year-olds in the intensive and moderate treatment areas jumped 10 to 15 inches. However, the same effect was seen in the control area where no culling had occurred, which ruled out culling as the cause in the treated areas. The antler-size increase was due to increased rainfall that year.

Donnie said this puts even more emphasis on the importance of nutrition over genetics.

“If you claim that culling is working for you, but you don’t have a control area for comparison, you have a hollow statement,” said Donnie. “That’s just your guess as to what’s causing the improvements you’ve seen.” 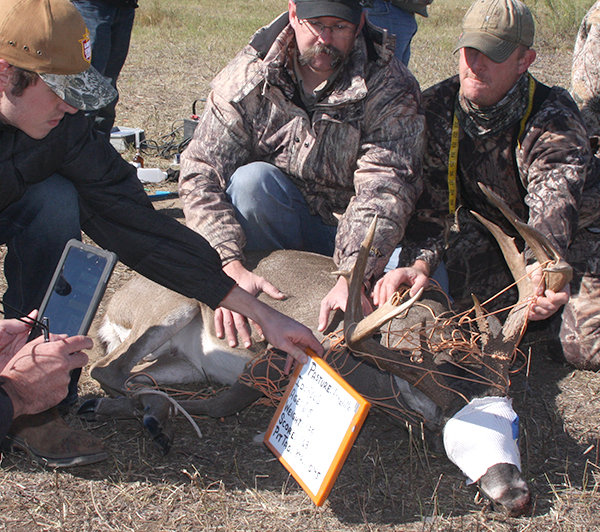 High-quality bucks with high breeding values represent such a small portion of a population that, even if you could somehow cull down to those deer, you’d have almost no bucks left in the woods.

In the east where rainfall is more reliable, a deer population would likely be able to sustain intensive culling longer without seeing detrimental population effects because fawn recruitment and survival is higher than in southwest Texas. Bucks being culled would be replaced faster than in the Comanche Ranch population. But without a link between antler quality and genetic breeding value, genetic change is still impossible.

“If you culled intensively for 20 years, you might gain one extra inch per buck on average,” said Donnie. “But you can probably add 15 inches on average in a single year simply through increased nutrition.”

Focus on What Works

“I have no hesitation, no doubt, that culling in wild deer does not work,” said Donnie. “Those who think they’ve had success aren’t considering all the other factors involved.”

Those factors include age, which is achieved by protecting most yearling bucks and increasing numbers of adults. They include nutrition, which is enhanced through habitat management techniques that increase forage production, like food plots, forest management, and prescribed fire, or though an intensive supplemental feeding program. They include techniques for encouraging mature bucks to use the land you hunt, like pressure management, sanctuaries, and cover production. Unlike culling, these techniques work.

You don’t have to believe it to see it.

Your support helps us reach more deer hunters and land managers with our educational resources, including website articles, podcast episodes, and videos. It also helps us recruit more hunters through programs like Field to Fork.