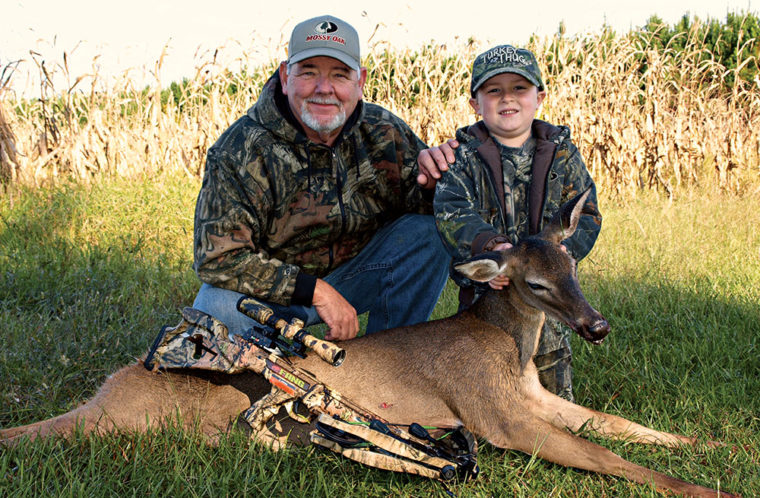 Sometimes I’m grateful I don’t have little kids today. It seems much harder to raise them than when mine were growing up. I do have four grandchildren that my wife and I are blessed to be around a lot, and we’ve learned it’s hard to compete with all the activities and tools they have today. So many games and events to keep them busy. It’s common to see kids today on their phones or tablets playing whatever game just got downloaded, and I guess some of that is okay since it’s in their culture. Pam and I make it a point to keep them busy at our farm with other things: fishing, hunting, swimming, chores, checking trail-cameras, playing on the dirt pile (that’s a big one) and so on. We have discovered if they have other activities to do, they put down the games and phones and get down and dirty. I love that. The key is making it fun.

We had all girls, and I didn’t care if they were big hunters or not, but I did want them to know where meat comes from and be able to speak the language around the supper table. I took them hunting and fishing as much as they would go, and now they want to pass that on to their kids. Mission accomplished. I’m no child psychologist, but I’ve picked up on some things related to kids and the outdoors that I feel make a difference in starting them off the right way and keeping them involved.

For instance, shooting is an area that needs special attention. I like to use BB guns and treat them like they are regular firearms. All the safety aspects are the same as big calibers and so are practice methods. I also make sure the BB guns fit them. Saw the stock down, whatever it takes to make it feel better to them. Lots of paper targets on the range then off to the woods to shoot at whatever we can find. Stumps, pine cones, whatever we see. In the course of all this, two things happen. First, they are learning how to safely handle a gun. Second, they are getting comfortable with it. I’ve seen so many parents scare a child with a 20 gauge shotgun or .243 rifles. Those seem small enough to us, but it’s a bazooka to a little kid. The worst thing you can do is imprint that hard kick and loud sound of a gun that is too big. There is no way they won’t flinch after that, and that’s the last habit you want them to form. They will come around to bigger guns when they are ready. 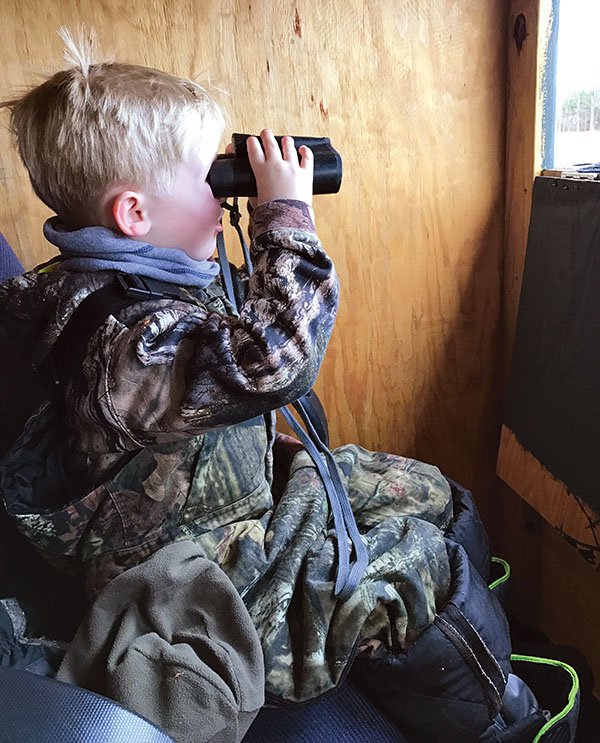 To keep kids engaged in a deer hunt go at their pace, not yours. Keep it fun, and keep your expectations real. Here, Cuz’s 5-year-old grandson Ben takes a look around

Second, go at their pace. Don’t insist they go hunting every time you go. Let them pick the times they want to go, and make sure your expectations are real. There will be more noise and moving around and less deer sightings if your child is typical, and that’s okay. Let them bring what they need to entertain themselves, and have a blind that is big enough to accommodate a little moving around. Remember, it’s their hunt not yours. Make a teaching adventure out of those early hunts. The child doesn’t even have to take a gun, just let them tag along. Point out things they might find interesting. Acorns dropping and why deer eat them, tracks, spider webs, anything they might key in on. Talk about why you hunt and why it’s not only important to you and the family but the environment. Make sure they understand why you enjoy it so much.

Concentrate on the fun part of deer camp even if you don’t belong to a deer camp. Things like getting gear ready, cooking outside, going to look at new gear, and watching hunting shows on TV. Let them invite a buddy to camp out and wear some Mossy Oak and face paint and shoot the BB guns. Make it part of their culture. Kids need something they are comfortable with and good at.

One of the most memorable things we did at our farm was a Bigfoot hunt. Two of the grandsons were infatuated with a television show about Bigfoot hunting, so we had a weekend-long hunt that included scouting for sign, baiting up an old hog trap with Slim Jims and hard candy, and a night-time spotlight search from an ATV. They still talk about that two years later.

Some kids are ready to hunt before others. If they are around it a lot, then they might want to go sooner than later. Such was the case with two of my grandsons.

Walker got his first buck sitting with his dad and me when he was 7. A perfect shot on a 7-point buck from a .243 at 80 yards. Matt took his first deer with a crossbow at age 6 sitting with me filming the hunt. Matt’s first hunt was supposed to be just a dry-run. I had been introducing myself to the ins and outs of a crossbow with the hopes of getting some family members to go “bowhunting.” I had never even held a crossbow much less shot one but quickly learned that I may have been missing something. In the process of getting myself and other family members familiar with the crossbow, Matt made me aware after his practice session that he was ready to go bowhunting. So we did. It was hot as usual in October in Mississippi, but I’ll never be the one to tell a 6-year-old it’s too hot, too windy, too late or too anything to go hunting.

Concentrate on the fun part of deer camp even if you don’t belong to a deer camp. Things like getting gear ready, cooking outside, going to look at new gear, and watching hunting shows on TV.

We must have sounded like the Christmas parade getting to and settled into the pop-up blind I had set up. Along with a fired-up 6-year-old, I had two chairs, a PSE Fang crossbow, backpack, full video gear including tripod, snacks and a 6-year-old’s hand-drawn rendition of a white-tailed deer on the back of a rifle target complete with a bold, black X to remind him where to aim. We somehow managed to get all the gear in the blind. I had the crossbow sitting on a Caldwell DeadShot field pod, which is perfect for this situation. Matt began to work on his snacks and I was adjusting the camera tripod when he whispered, “Pop there’s a deer.” Not only was it a deer, it was the perfect deer for him. A young doe with no fawn and head down in the Biologic. All of a sudden this dry run was starting to feel like a hunt. I videotaped the deer for a minute and soon a second doe and spike were in the small plot. Matt was already looking through the scope with both hands on the crossbow. I just watched to see how he would handle things. My thoughts were all over the place. Is he too young? Does he understand what it means to kill a deer? Have we pushed him into this because we like it? I focused the camera and waited for his reactions. I didn’t have to wait long. His next words were, “Pop, if she moves to the right a little, I can take her.”

I framed up the camera on the doe and forgot about it so I could focus on Matt and his task. I had taken his little deer drawing and taped it to the inside wall of the blind, and clearly he would look and the deer and then at the drawing with the X drawn right behind the shoulder. He did that a couple of times and whispered “Pop, I can shoot her right there.”

I leaned over so I could see he was indeed on the right deer and told him “Whenever you’re ready, just squeeze the trigger.”

I pushed the safety off the crossbow and watched almost in disbelief as the arrow disappeared right behind the shoulder, pretty much exactly where the X on the drawing was drawn.

I was sure I heard the doe crash just inside the wood line but made Matt sit there while I explained why we wait after the shot, what we look and listen for and did my best to hide my own excitement, because deep down I knew he had just made a perfect shot and taken his first deer on his very first hunt.

What happened next was truly the most priceless part of that day. Sadly, I had turned the camera off after filming his reaction and his thoughts and missed recording this. After a few minutes of silence Matt said, “Pop, I think we should say a prayer so we can find my deer.”

We took off our hats, and I’ll never forget this simple prayer from a brand new, 6-year-old deer hunter.

“God please let me find this deer. Have a good week. Amen.”

I almost cried. We went to where the deer was standing. Matt saw the blood and took to the trail like he had recovered hundreds of arrow-hit whitetails.

“Here’s some, here’s some Pop, she went this way.”

My grin had to look like a crescent moon. He lost the blood on the edge of the plot and said “Pop, I think the deer is lost.”

I told him to retrace his steps while I walked just a few yards into the woods, and I saw the doe lying not 20 yards away. By then his dad was there, and we put Matt back on the blood trail and he found his deer. It was sheer joy for a long while after that. His mom and grandmother, little brother and his pet lab Lucky all celebrated what was supposed to be a dry-run practice hunt. Matt stood next to his dad and me while we skinned and butchered the doe and asked questions about the process. It was clear he not only would be a hunter for life but, more importantly, understood why we hunt.

These grandkids are the reason I worked so hard to obtain and now maintain a small farm. I have been blessed to work for Toxey Haas and Mossy Oak for almost three decades and have been to places and seen things outdoors that most people only dream of. For me personally, my goal was to have a target-rich environment where my grandkids can hunt and fish and be successful. If the whitetails get big racks, that’s great, but while these kids are young I’m only focusing on what’s fun, not what’s a shooter.

These days I get as much pleasure from the seat of my tractor as from the seat of a lock-on. I work the land so I can entertain and teach, and in my opinion there is no greater responsibility or reward.