It never fails. Around mid- to late October every year, my phone starts ringing constantly from concerned food plotters frantically explaining that they planted their food plots in early September but then watched them wither and disappear. Is it too late to replant?

Food plots fail for a variety of reasons such as the onset of dry conditions soon after planting, or army worms move in and destroy the plot in what seems to be an overnight feeding frenzy. Alternatively, maybe you purchased some bad seed and it didn’t germinate well, or maybe you covered the seed too deep when planting and it simply ran out of energy and died before it could break through the soil surface. There are lots of potential explanations for failed food plots, but by the time you realize you haven’t exactly reaped what you sowed, time may be running out for you to make the necessary adjustments.

Fortunately, in many cases, replanting your food plots is a viable recovery option if you act swiftly. The specific option is often dictated by what caused your food plots to fail in the first place. For example, if the culprit was drought, and there still isn’t any rain in the forecast, then it is futile to replant anyway. Additionally, another consideration is what you already have invested in your plots, such as lime, fertilizer, diesel fuel, seed, and herbicide – not to mention the amount of time you spent planning and executing your food plot plan. Thus, the ideal recovery option would be one that is quick and effective but also one that requires the least amount of time and money possible.

When deciding if you are going to replant, there is also the important question of whether there is enough time for your plots to develop and be productive before extremely cold weather sets in or the hunting season ends. Thus, an important consideration when replanting is to use fast-growing annual forages that do not require much soil preparation and will establish well by simply top sowing. My favorite species to use in this situation is a combination of wheat, crimson clover and Frosty berseem clover (see the sidebar for recommended seeding rates). These are all highly preferred species that tolerate a wide range of soil and weather conditions. Plus these forages will germinate very quickly after a rain and provide the deer herd with a highly nutritious and attractive food source (Frosty berseem clover is seen in the photo at the top). If you have access to a no-till grain drill, another option is to drill these fast-growing species just prior to a rain.

You don’t necessarily have to use all of these species if you decide to replant your food plots. If desired, you could simply plant the wheat alone at 120 lbs./acre, or plant it in combination with just one of the clovers mentioned. However, be sure you use quality seed, and adjust your seeding rate according to the number of species you use. Oftentimes hunters will skimp in this situation and plant feed wheat or other cheap seed thinking it will save them money. However, the germination rate of feed wheat is poor, and so is overall production, which often leads to unsatisfactory results and additional wasted money and time.

Depending on the condition of your food plots at the time you decide to re-plant, there may be a few things that need to be addressed beforehand. For example, if the reason your plots did poorly is the result of planting bad seed or covering the seed too deep, you may have to deal with emerging weeds that are taking advantage of the soil disturbance and fertilizer. Thus, the plot should be mowed or sprayed with a non-selective herbicide to eliminate weed competition prior to re-planting. In fact, this can be done the same day you replant in order reduce the number of trips you have to make to the field.

Unfortunately there really isn’t a well-defined cutoff date that can be used to dictate whether or not it’s too late to attempt to replant your food plots. This really all depends on how the weather shapes up during a given year with regard to rainfall and freezing temperatures. Those of us in the South typically have a little more time to work with than our friends up North since our winters typically arrive later and conditions are more favorable for young emerging forages. However, our northern friends are able to begin their fall planting activities much earlier, thus food-plot failure will be realized earlier, so from a timing standpoint there isn’t much difference. The primary difference is the hunting-season framework in your state, which should be considered when weighing your options, especially if your sole objective is to have food plots to hunt over versus having food plots to improve the nutritional carrying capacity of the land.

Back in 2016, much of the Southeast experienced a severe drought in the fall when many hunters were preparing and planting food plots. In my area in West Alabama, we went about 60 days without measurable rainfall. Needless to say there were a lot of dusty fields across the South that fall and winter. Because of the lack of rain, I wasn’t able to plant my fields until late November. Although our plots were not available for deer until after gun season began, we still had excellent late-season hunting opportunities in January and early February, while many other food plots in the area were unproductive and filled in with winter weeds.

If replanting your plots in the fall or early winter is not a sensible option, another strategy to consider that is very effective when establishing perennial clover is frost-seeding. This can be implemented in late winter as the alternating freezing and thawing of the ground incorporates seed into the soil. Frost-seeding has several advantages, such as reduced prep work, labor, and equipment compared to conventional seeding methods. 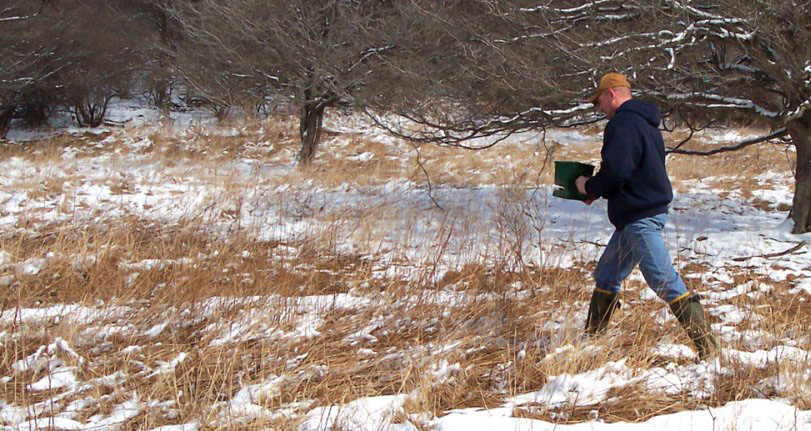 While this particular strategy will not help you provide food during the current hunting season, it will provide quality food sources throughout the following spring and summer, as well as the early part of the next hunting season that you can capitalize on. Again, consider your objectives when making these decisions.

Timing of planting varies according to where you are located geographically. In general, frost-seeding should occur in March to April in the North and in January to February in the South. The goal is to plant during the last few weeks of freezing conditions in winter.

If your food plots do not perform as expected, don’t throw in the towel. Instead, make a calculated decision based on what caused your food plots to fail, as well as current and forecasted weather conditions. Also consider your specific objectives for your food plots. With minimal effort, replanting your plots using fast-growing annual forages, such as those mentioned here, could help you salvage all the time and money you initially invested in your food plot program.

Ryan Basinger of Alabama is a certified wildlife biologist and the Wildlife Consulting Manager for Westervelt Wildlife Services. He has a broad range of professional experience managing wildlife populations and their habitats on public and private lands throughout the Southeast. Ryan has conducted research on a variety of species and habitats where he examined the effects of various forest management techniques on browse production, availability, preference, and nutrition for white-tailed deer. Ryan also has conducted extensive food plot research where he compared production, nutrition, preference, and availability of various forages planted for deer. He earned his bachelor's degree in wildlife science from Mississippi State University and his master's in wildlife management from the University of Tennessee.