Shaken, Not Stirred: Science Gets Closer to CWD Field Testing 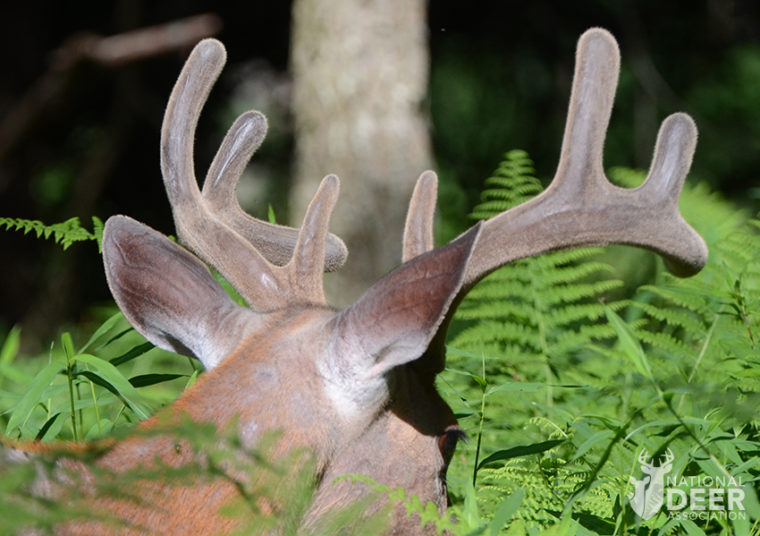 Small samples of ear tissue, from both living and dead deer, proved to be useful for CWD testing in new research that may improve and speed up testing methods.

I’m not a huge 007 fan. However, like the heart of every Bond heroine, I downright “stole” the title for this post from my colleague and NDA’s Deer Outreach Specialist, Cheyne Matzenbacher. Why would I do such a thing? Because it helps me visualize a key aspect of one of the newest methods that we can use to test for chronic wasting disease (CWD); and I figured it would help you to do the same.

Recently, while describing the difference between CWD testing technologies to our conservation staff, Cheyne tagged the somewhat new-kid-on-the-block technology called Real-time Quaking-Induced Conversion (RT-QuIC) with the descriptor for how James Bond took his signature cocktail. Shaken, not stirred.

Enzyme-linked immunosorbent assay (ELISA), Immunohistochemistry (IHC), and RT-QuIC are the three most widely known CWD tests being used today. ELISA and IHC only use postmortem tissue to detect the presence of infectious prions. RT-QuIC involves placing suspected samples from either live or dead deer in a solution, shaking and incubating the mixture to get a reaction, and then monitoring for growth of misfolded prions. So far, this method has proven useful to detect CWD prions in as little as nine hours in a variety of sample types; however, until recently the best documented diagnostic RT-QuIC test involved samples from rectal biopsies of dead deer.

Though this development is meant for trained professionals and there is a lot still to learn about its use, perhaps the discovery will one day lead to a kit developed for hunters to be able to take afield.

Fast forward to April 2021 when newly published research from Scientific Reports tested a more easily accessible specimen that biologists can get from either dead or live deer: a chunk of the ear.

In that paper, National Institutes of Health–Rocky Mountain Laboratories infectious disease scientists reported that a 0.5 cm punch from asymptomatic white-tailed and mule deer ears actually had similar or better diagnostic sensitivity (81%; 21 of 26 positives) and specificity (91%; 29 of 32 negatives) of identifying CWD compared to ELISA, which is currently the gold-standard testing methodology used by state wildlife agencies. 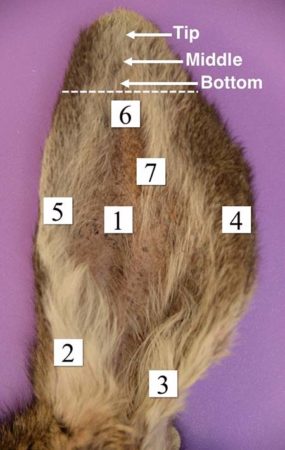 Scientists reported ear locations from which skin tissue was collected and tested for CWD via RT-QuIC. Researchers found that prion seeding activity was most concentrated near (areas 1 and 6) or on top of (7) the auricular nerve, with area 7 giving the highest proportion of positive reactions.

These results are very promising because, if proven, experts may have just discovered a way to test live or dead deer and get accurate results even more quickly than we’ve realized in the past. Right now, RT-QuIC is only used for research. It has not been validated for official, regulatory disease diagnostic testing in wild or farmed deer; and in fact, it’s so new that we included a question about its use in our 2021 NDA Deer Report survey to see if any state or province is beginning to use this new technology.

Around the same time this spring, University of Minnesota scientists at the Minnesota Center for Prion Research announced that they may have developed a novel approach to field testing CWD, which involves a new assay that uses nanoparticles to generate a color change (red for CWD positive and blue for CWD negative) whenever a technician submerges suspected tissue samples into a specialized solution. Though this development is meant for trained professionals and there is a lot still to learn about its use, perhaps the discovery will one day lead to a kit developed for hunters to be able to take afield.

It’s reassuring to share some good news about CWD with NDA members when we can. The reality is that new technologies and discoveries such as these testing advances are a big step to actually making an impact. We can beat CWD. But the way we are going to do it is by first working together as a community to slow it down. To do that we’ll need to stop the primary ways it’s spreading in large jumps – which are human-induced movement of live deer and high-risk parts from dead deer. Those are both easily solvable, we just need to do it, and lowering barriers to testing will help.

We don’t need to hire a secret agent to make it happen, either. It’s our choice, and we can choose to win, lose or just sit by and watch more deer die.