Should You Shoot a Deer Wearing a Tracking Collar?

Our knowledge of deer behavior and biology, and our ability to hunt and manage deer effectively, expands all the time thanks to the remote tracking collar. You’ve seen their movements as dots on a satellite map of far-away locations. But what if a deer wearing one of them stepped out of spreadsheet data into the food plot in front of you? Shoot or pass?

Your decision affects the results of someone’s professional work, so scientists have definitely given this question some thought. But you may not have, and neither had I until recently. There’s more to this question than you might think.

First, think about the likelihood you will be faced with this decision. How many whitetails are bouncing signals off satellites at any given time? These days, a single GPS-tracking collar with all the most advanced features costs around $3,000, so more of these movement studies will be operated by larger deer labs with deeper pockets and broader donor support. I asked five of the larger university and agency deer research programs how many deer they’d be tracking this fall.

The largest number I found was from the University of Georgia. Dr. Gino D’Angelo said UGA’s Deer Lab should have 168 collars “on air” this fall in studies in Georgia, Florida and Arkansas. (The photo above shows a collared buck that was part of a previous UGA study in Pennsylvania)

Interestingly, hesitancy to shoot a collared deer varied depending on the type of deer. Far fewer large-antlered bucks would have been passed up because of the collar.

Wisconsin DNR, the University of Wisconsin-Madison and the USGS National Wildlife Health Center are currently tracking 149 deer in Wisconsin, according to DNR’s Dr. Dan Storm, part of a long-term, multi-agency study of CWD’s effect on deer survival.

The Caesar Kleberg Wildlife Research Institute (CKWRI) at Texas A&M-Kingsville will be tracking about 50 whitetails this fall in Texas, according to Dr. Aaron Foley.

Penn State’s Deer-Forest Study attempts to have around 40 deer collared every year in Pennsylvania, said Dr. Duane Diefenbach, and all of those are on public hunting land.

Dr. Bronson Strickland at Mississippi State University told me MSU’s Deer Lab will only have one active tracking study this fall, with 20 collared does and bucks in a study related to deer density and chronic wasting disease (CWD).

That’s around 425 deer. Numerous smaller universities and other agencies are also using GPS tracking collars along with their cheaper old-school cousins, radio telemetry collars. There’s no way to know the true number, but let’s say it’s double the number from these five groups. That’s still less than 1,000 deer out of millions in the United States. But they’re not scattered evenly across the country. If you happen to hunt on or near one of the active study sites, your odds are a lot better than mine.

Will You Even See The Collar?

Whether to shoot a collared deer assumes you noticed the collar.

If you’re a deer scientist studying survival factors, then hunter harvest is going to be a big part of the equation. If the sight of a tracking collar influences a hunter’s decision to shoot or not shoot, then the collar itself introduces bias into your measurements. In 2009, researchers with Wisconsin DNR and UW-Madison set up a test with deer decoys at varying distances, in varying levels of cover, and at varying angles. Participants in a Learn-to-Hunt-Deer training workshop, including new hunters and their experienced mentors, were asked to climb into elevated hunting blinds and spend three minutes “looking for deer.” They were allowed to use binoculars. They did not know the study involved tracking collars. The trials involved 130 novice hunters and 116 experienced mentors.

Overall, these hunters only noticed 26% of the potentially observable collars on the deer they spotted. The rate climbed with the experience level of individual hunters, but even the mentors did not always notice all the collars. With three collared decoys in the vicinity, only 14% of the mentors noticed all three collars on the deer they said they spotted.

In a real-world scenario, with a deer on the move and the excitement that is part of observing a live deer in a real hunting situation, especially a large buck, I can’t imagine the rest of us would score much better than these Wisconsin hunters. 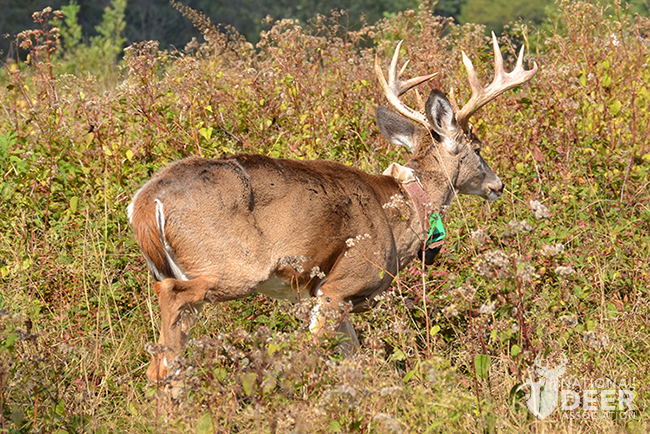 In a real hunting situation, do you think you would definitely spot a tracking collar on a deer? Tests suggested most hunters would not.

Interestingly, this hesitancy to shoot a collared deer varied depending on the type of deer. Far fewer large-antlered bucks would have been passed up because of the collar. Interrupt the research, then dial the taxidermist.

This study revealed a definitive potential bias in using collared deer for survival studies: Certain deer that might have otherwise been shot by hunters may be passed up because of the collar itself.

Back to the Question

So, should you shoot a collared deer if you see one?

“All my research has wanted hunters to harvest our collared deer, if it is legal and the hunter would want to harvest the deer,” said Duane, whose study focuses on deer survival and habitat use on Pennsylvania public hunting land. 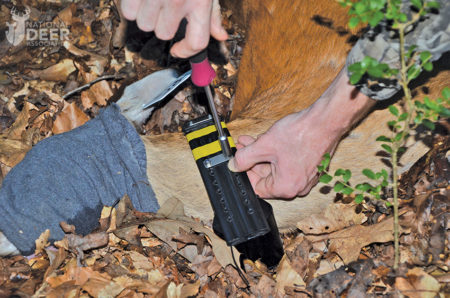 Tracking collars are expensive, especially GPS models that talk to satellites. There is also a lot of time and effort put into capturing and collaring each deer. While some studies may welcome hunter harvest as part of the results, others need deer to stay alive and produce data as long as possible.

Some researchers know that hunting mortality is part of their study, but they also cringe a little when they remember all the time and effort it took them to capture and collar that deer you just field-dressed.

“Using GPS collars is a very, very expensive way to get answers about survival, so we want the deer to stay alive and keep it on as long as possible,” said Bronson. “You can get the same data from ear-tagging deer, or use a cheaper VHF collar with a mortality sensor.”

Still other researchers do not want deer shot by hunters, and they structure their studies accordingly, such as collaring deer on restricted or private lands where harvest can mostly be controlled or discouraged. Two active CKWRI studies in Texas, for example, are on lands that are closed to deer hunting. “But,” said Aaron, “if the deer leave the properties, they are fair game.”

Here’s the best answer: If you are hunting legally, on lands where you have permission, and you see an otherwise legal deer wearing a tracking collar, all you need to ask yourself is whether you would shoot the deer if it didn’t have a collar. If you would, then don’t let the collar stop you. And if you don’t discover the collar until you recover the deer, don’t worry.

On the contrary, be excited! It’s a rare privilege for a hunter to participate in deer science. Pose for photos with your exceptionally rare encounter. Follow any instructions on the collar to report your harvest, or simply hang on to the collar and wait: The scientists will find you.