Piebald deer are the result of a rare genetic trait that causes a mix of white hair patches among patches of the normal “brown” deer color. The genetic mutation causes these patches of skin to lack the specialized pigmented cells that give deer hair its color (In true albino deer, these pigment cells are present, they just fail to produce color, so the entire deer is white). Unfortunately for piebald deer, the condition can sometimes include severe deformities that run deeper than hair color.

Unlike albinism, the piebald defect can vary widely in its impact on individual deer, with some deer displaying only a few small patches of white hair and others being almost entirely white. The same is true for mutations associated with “piebaldism” that lead to skeletal deformities and other internal abnormalities. The adult piebald deer seen by hunters usually have milder forms of the piebald condition, while deer born with extreme piebald deformities rarely live long enough to be witnessed by anyone. A dead fawn discovered in Virginia in October 2021 presented a good opportunity for wildlife disease experts to examine this rare condition.

On October 26, 2021, the Virginia Department of Wildlife Resources collected a piebald fawn that had apparently died of natural causes and was displaying severe neck and spine malformations. They sent the fawn to the Southeastern Cooperative Wildlife Disease Study at the University of Georgia’s vet school, where the fawn was x-rayed. The images shown here, courtesy of SCWDS, show the extreme curvature of the fawn’s spine and neck. 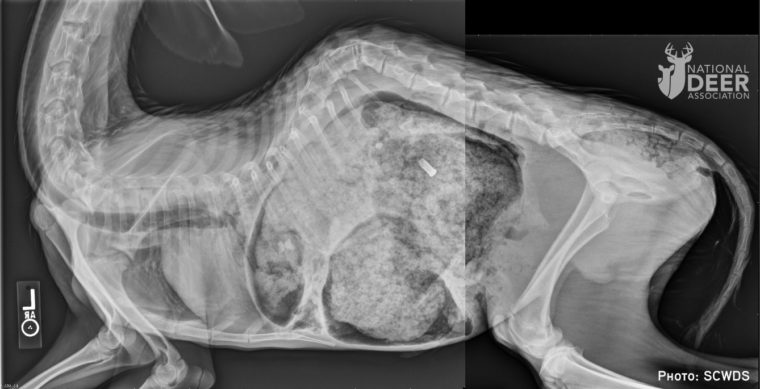 This composite of two x-rays (front and back of the deer) shows the severity of the “hump” in the middle of the deer’s spine. This kind of skeletal deformity can be part of the piebald mutation.

The fawn also had another common feature of this condition, “dorsal bowing” of the muzzle, or a humped nose. Internal examination of the fawn showed poor physical condition as well. Though the specific cause of death could not be determined, it’s likely the fawn’s deformities were preventing it from thriving. 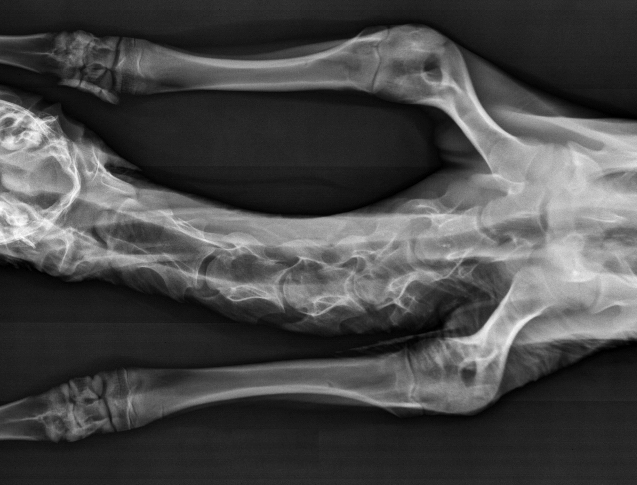 This top-down view of the fawn’s neck shows severe sideways curvature of the spine.

In a report about the deer, Melanie Kunkel and Dr. Nicole Nemeth of SCWDS wrote: “Piebaldism reportedly affects less than 1% of white-tailed deer populations, although this may vary regionally due to differing hunting restrictions on deer affected by the piebald trait. In one population, prevalence reached nearly 2% following temporary hunting restrictions.” In other words, when piebald adults are protected from harvest, the trait can become slightly more common in a local population.

Many wild and domestic animal species can be affected by this genetic anomaly, though the report said that whitetails are among the species more commonly displaying the piebald condition, especially in the Southeast.

If you have a sharp eye, you might have noticed what looks like part of an empty shotgun shell or similar object in the fawn’s rumen, which it apparently ate. According to SCWDS, the object was not located during the internal examination, so your guess about its identity is as good as ours. 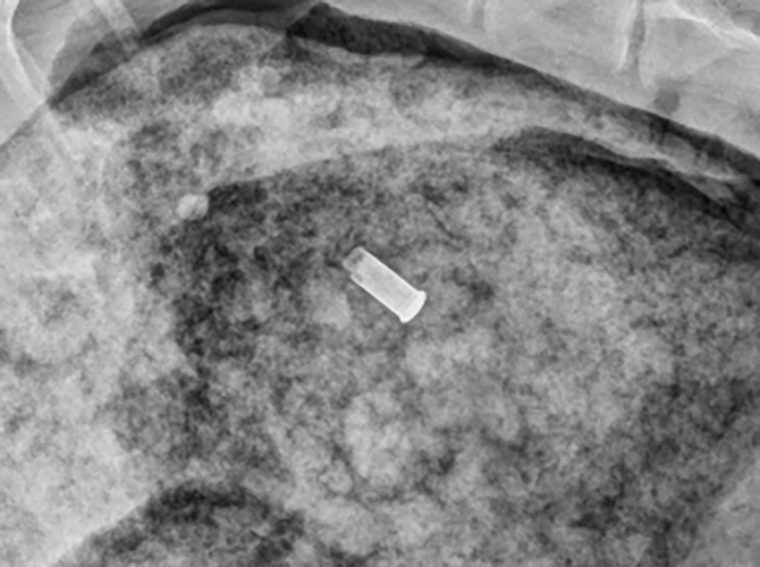 This object in the fawn’s stomach could not be located and identified when the fawn was examined internally. Your guess is as good as ours.

The video below shows another piebald fawn born in 2014 at the University of Georgia Deer Lab. It also had extreme deformities, including spine curvature and several other severe skeletal defects.