The Case For and Against Summer Deer Scouting 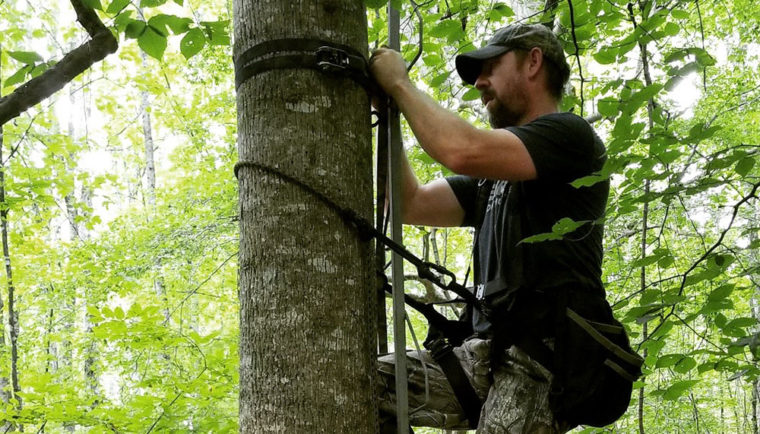 For many, summer weekends are spent on family barbecues, swimming, fishing and trips to the mountains or the beach. But for some, summer officially kicks off the countdown to deer season. While whitetail does are busy raising fawns and bucks’ antlers are starting to take form, many deer hunters turn their attention to preparing for the upcoming season. It’s only natural to want to hit the woods to hang trail-cameras and scout for the upcoming deer season, but is summer scouting worthwhile? Or are you doing more harm than good?

The Case Against Summer Scouting

One of the primary cases I hear against summer scouting is that the information you gather this time of year — where deer are feeding, bedding and traveling — won’t be applicable come deer season, because the deer’s patterns will change prior to opening day. And, unless you live in one of the handful of states with a late August or early September opener, that is true to some extent. Food sources change from summer to fall, and hunting pressure can quickly impact deer patterns as well.

Another case against summer deer scouting is the belief that your presence in the deer woods may push deer out of the area or alter their behavior prior to opening day. While I certainly wouldn’t be out there tromping around potential stand sites just days before the opener, scouting done in July and August shouldn’t have any long-term impact on deer movement in the area. While studies have shown that deer react quickly to hunting pressure, they also seem to recover somewhat quickly once that pressure has subsided. 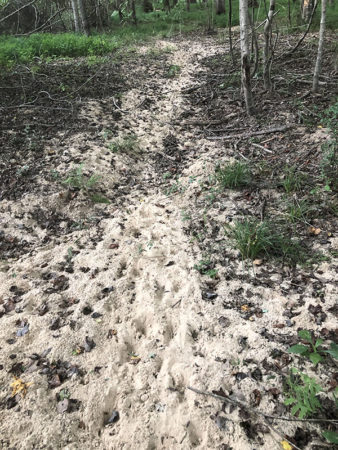 Don’t get too caught up in fresh sign while summer scouting, as the deer will likely change patterns by the start of deer season.

The question then becomes, what exactly am I looking for when I summer scout since deer are likely to change patterns between now and opening day? And my advice is to ignore most of the “fresh sign” and focus on things that will help you stay on the deer throughout the season — the property’s terrain and habitat features.

If you are dealing with a large tract of land, I would recommend starting your scouting efforts at home in front of a computer or your favorite mobile device. By identifying favorable habitat and terrain features on a mapping app, like onX Hunt, you can narrow down the focus of your boots-on-the-ground scouting, saving time and boot leather! If it’s a small tract of land that you could physically scout over the course of a day or two, then cyber-scouting may not be necessary.

Once I get out to the property to scout, my main focus is to learn the lay-of-the-land and familiarize myself with any potential terrain or habitat features that may attract deer or funnel deer movement. Again, I’m not really concerned about what the deer are doing right now, but more what they will be doing at different stages of the season. So, let’s start by looking at some of these terrain features, and then we’ll get into habitat.

Unfortunately there’s no way to cover every terrain feature that could potentially impact deer movement. There have been entire books written on the subject. For the scope of this article, I just encourage you to think like a deer, where your primary focus is survival, and look for changes in terrain that deer may likely use. Keep in mind that, like humans, they often take the path of least resistance. With that in mind, saddles are a key terrain feature I look for both on my onX Hunt app, as well as out in the field. If you aren’t familiar with a terrain saddle, it is simply a low spot between two ridges or ridge peaks. Since a saddle is often the lowest point on the ridge, deer will use it to travel from one drainage to the next. 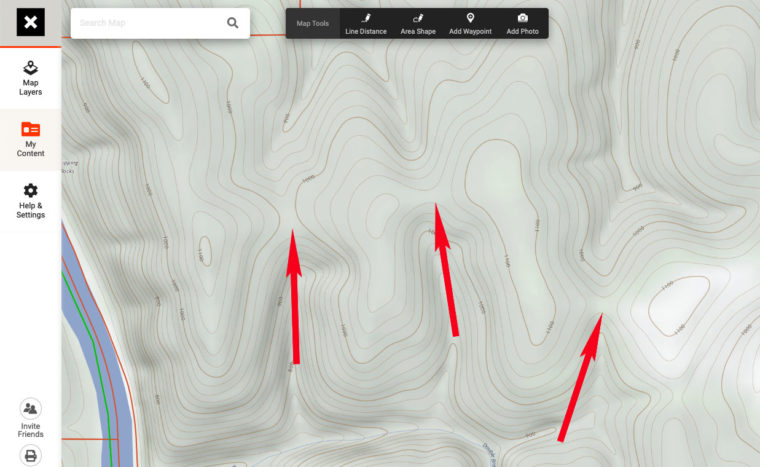 Saddles, like the three seen here, are low spots between two ridges or between two high spots on a ridge. The are often use by deer as points to cross over a ridge.

Pinch points are another terrain feature that can concentrate deer movement, providing a great spot for a hunter to ambush a deer. Pinch points can come in many forms, and can be the result of bluffs, bends in a stream, steep drainage ditches on the side of a ridge, and creek or river crossings, just to name a few. Again, think like a deer while you are scouting and look for any terrain feature that would force you — or at least influence you — to take a specific path. 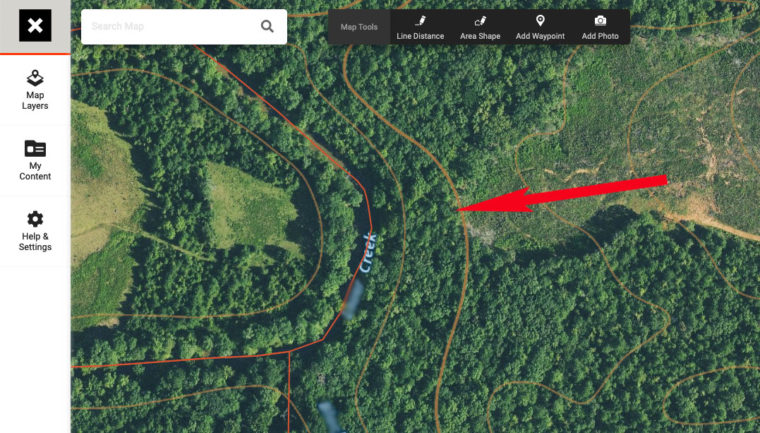 This is just one of many examples of a pinch point that can funnel deer movement. In this case, deer will travel through the narrow strip of woods between a large creek and a clearcut to avoid having to cross the creek or expose themselves in the open clearcut.

Any terrain features I believe may funnel deer movement get noted on my onX app for future reference. Even if there isn’t much deer sign currently there, that doesn’t mean these places won’t get used once hunting pressure increases or food sources change.

And speaking of food sources, my other primary focus with summer scouting is learning what habitat features are available on the property that may attract deer. I am specifically looking for food sources and good bedding/security cover. 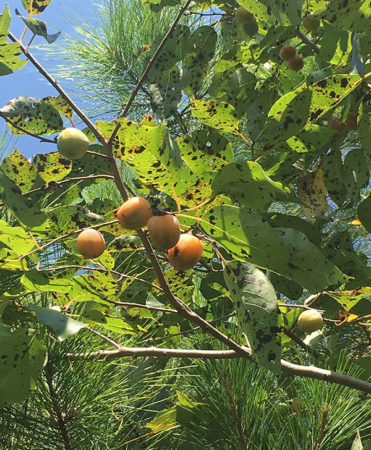 Soft mast, like the persimmons seen here, can be great food sources to note while out summer scouting, particularly if they are located near good cover.

For food sources, I’m not overly concerned with what the deer are eating right now, but, instead, what they may feed on at any point during deer season. I pay particular attention to any mast producers, including soft mast like muscadines and persimmons, as well as hard mast producers like white and red oak species. Again, be sure to mark everything on your mapping app, because you never know when that intel may come in handy.

For example, last year the red oaks dropped early and heavy where I hunt in west-central Georgia, and the deer were concentrated on them for a few weeks of deer season. Because my previous scouting efforts had focused primarily on locating white oaks, I was left scrambling looking for red oak trees on the public land where I hunt. Had I marked those oaks during my previous outings, it would have been much easier to go in and check to see which ones had active deer sign rather than scrambling around just trying to find any red oaks I could.

Of course, there are plenty of other potential food sources beyond just mast-producing trees and shrubs. Food plots or agricultural fields are obvious ones, but I typically avoid those on public land, as they often concentrate other hunters. As a result, deer typically only frequent them at night. Much of a deer’s diet consists of various forbs and woody browse. I would encourage you to learn to identify some of the most preferred native plant species for your area, and mark them on your mapping app when you find them where you hunt. Things like greenbrier and honeysuckle can be a great late-season attractant, and keying in on them allowed me to take a doe on the last day of deer season each of the two previous years.

The last thing I want touch on is really what ties all the other pieces together — good cover. There have been plenty of GPS-collared deer studies showing that deer, particularly mature bucks, prefer to be where hunters aren’t. And often that is the thickest, nastiest cover available.  So, as you are out there looking for favorable terrain or habitat features, always make note of how far those features are from good bedding/security cover. The further that feature is from cover, the less likely I am to hunt it.

Summer can be a busy time of year, particularly if you have kids. But if tagging a mature buck or filling the freezer with venison is on your fall to-do list, be sure to carve out time this summer to scout. The information you gain will not only increase your odds this season, but likely for many seasons to come.