The Most Difficult Deer to Hunt May Not Be Carrying Antlers 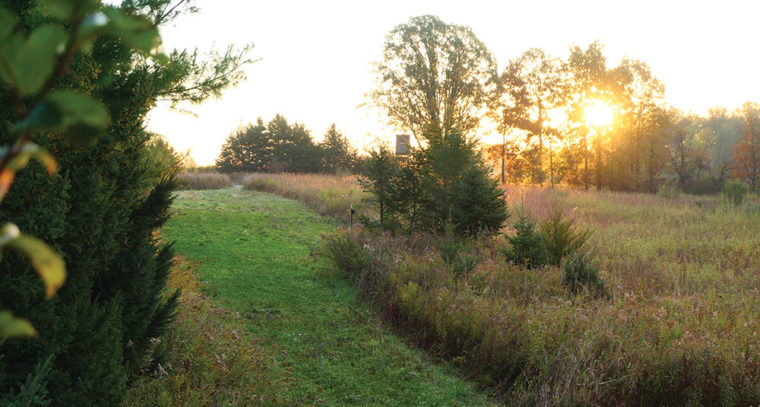 My latest affair with a beautiful and wicked-smart female came to a bittersweet end on December 26, 2019. I won’t forget Blondie, the lessons she taught me, and the experiences we shared. Don’t worry, my wife knows all about this affair and approves. More accurately, she puts up with my annual obsession.

It started in October when I noticed a big, blonde doe moving with a group of other does and fawns. It was clear she was in charge and calling the shots. My farm must have been the core of her group’s home range because I saw them frequently. While she was gentle with the members of her immediate circle, it was clear she ruled the farm. Females not in the group would quickly make way when she appeared. If they didn’t, they were likely to get a swift and decisive kick.

During archery season, Blondie kept her group out of bow range or behind cover. She seemed to know, based upon wind direction, which blinds or stands I would be in and avoid them. I would see her at a distance, but she seemed to have a sixth sense that always helped her lead her group on routes that avoided any clear shots. I believe she had been watching me for years, learning my patterns of behavior and hunting locations based upon wind direction. My friend Rick Wilburn named this particularly large doe Blondie because of her lighter brown color, which made her easy to identify.

True to form, she did not stop to take a bite in the clover-covered shooting lane in front of the blind. Instead she moved quickly into the prairie grasses and surveyed the situation while several of her group emerged and started eating.

On opening morning of Michigan’s firearms season, I harvested a big 10-point buck and two mature does. Two of the deer went into my freezer and the other was donated to Michigan Sportsmen Against Hunger. While a harvest ratio of two antlerless deer per buck is generally a healthy ratio, the high deer densities in my area, crop damage, and nearby cases of CWD necessitated taking more antlerless deer to manage the herd. We typically do most of our doe harvests in December following Michigan’s November 15-30 regular firearms season, so Rick and I began devoting more time to hunting her at the beginning of December (Because we’re in a CWD management zone, we can use modern firearms during Michigan’s muzzleloader and late antlerless seasons). However, Blondie kept giving us the slip. She would use cover to sneak by my stand, offering no shot. One time I thought I had her, but she kept a log and brush between us until she was spooked by another buddy, a funny story by itself. Another time I thought I had her, but as I brought the gun to my shoulder I realized the stock was loose and brought the gun back down. I was immensely frustrated that I hadn’t checked it closer before the hunt but glad I hadn’t taken a bad shot. 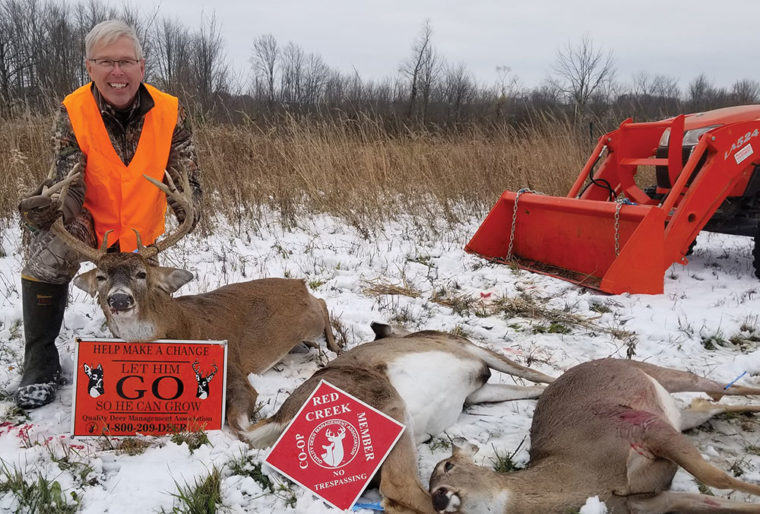 Opening morning of Michigan’s 2019 firearms season was a good one for Erik, who killed a mature 10-pointer and two does. But given the special need to take even more does in Michigan’s CWD management zones, Erik set his sights on that goal – and with a particular doe in mind.

After a series of close and not-so-close encounters over the course of December, the 2019 season was beginning to draw to a close. I had become obsessed with hunting for Blondie. Just before Christmas, I made a move into one of my bow stands to intercept her group between my still-standing corn field and their bedding area in a block of pine and spruce I had planted 20 years previous. Everything went according to plan. The entire group emerged out of the pines and moved under a big, old apple tree 60 yards away. After eating a few apples, some of the younger deer began moving toward me through hinge cuts, brush and woods. They were all quite calm and unaware of my downwind presence, except for Blondie. She was on high alert!

When I shifted my position and brought the gun up to make a shot, Blondie caught my movement 16 feet up in the tree, turned to face me, and stared me down at 25 yards. I had the gun almost to my shoulder and my body uncomfortably twisted, but I froze knowing I couldn’t move without confirming her suspicions. Seconds ticked by, which soon turned to minutes. My frozen arms and back were in pain, and I silently begged Blondie to relieve my agony by giving me a shot or moving on so that I could move again. Eventually, she softly stomped her hoof a few times, got the attention of her group, and retreated back into some thick brush, taking the rest of the deer with her. I eased the gun down, untwisted myself, and felt immediate physical relief.

Blondie then moved a bit more to the right, and I thought I might have another chance at a shot. I slowly brought the gun up again and twisted myself even further. Blondie picked up on my careful movements and came straight at me, stomping and staring back up at the tree. I froze again, and the entire painful game started all over. Once more, she stomped her foot and retreated, taking the group back a bit further into the brush and woods. I brought my .450 Bushmaster rifle back down and breathed a sigh of relief and frustration. The process repeated one more time before she led her group back into the block of pines for good. It was a frustrating, painful and exciting hunt.

Over Christmas, the cornfield was harvested and the situation changed. Blondie’s group could only safely visit the cornfield in the dark. On December 26 there was an east wind, so I snuck into a blind that is situated on the west edge of the farm and on the south edge of the block of pines and spruces. I was betting she would bring her group by on their way to some food plots, planted prairie grasses, and thick brush to the south.

The hunt started slowly. A couple yearling bucks showed up and ambled by my perch. I was beginning to think Blondie had slipped by on the east side of the farm and outwitted me again! It all changed around 9:30 a.m. when Blondie uncharacteristically emerged from the pines at the front of her group. True to form, she did not stop to take a bite in the clover-covered shooting lane in front of the blind. Instead she moved quickly into the prairie grasses and surveyed the situation while several of her group emerged and started eating.  Initially the thick prairie grasses covered her vitals, but after taking a few more steps I had a clear broadside shot at only 30 yards. I quickly took that opportunity. It was a sudden end to the story. 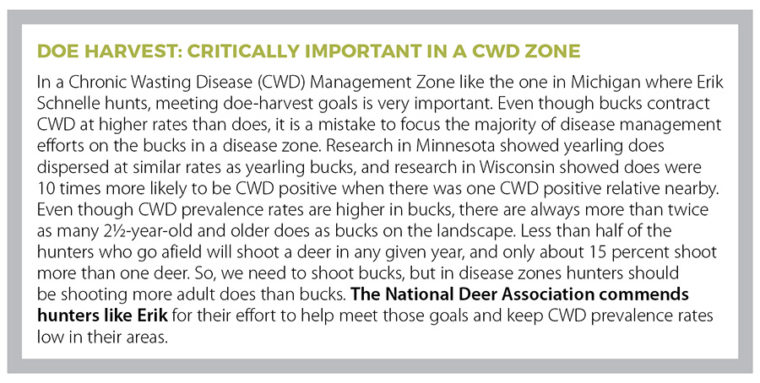 Looking down on her still form, I felt a mix of emotions knowing that our affair had ended. Blondie was an amazing animal. She was smart, beautiful, and a committed leader. I reminded myself that it is essential to the health of the herd and the habitat that we harvest appropriate numbers of does every year.

The Michigan DNR check-station attendants estimated Blondie’s age at 4½ years, making her the latest of my many memorable mature doe hunts. I have been successful hunting, learning from, and making memories with many does in the 4½- to 9½-year-old range over the years.  By the time you read this, I hope to have had another such affair. 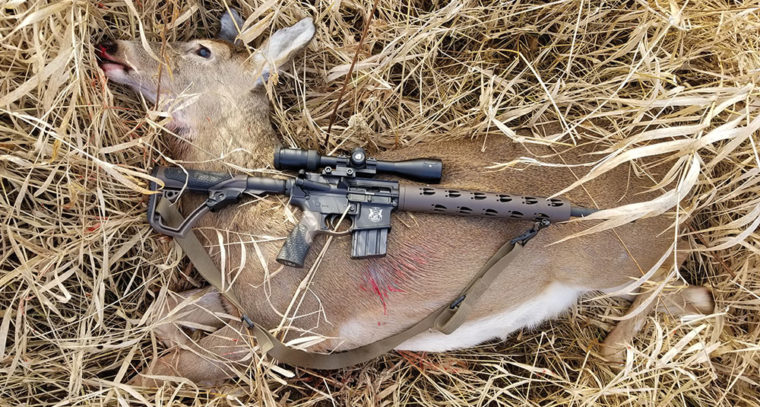 Blondie, named for her lighter coat color compared to other does in her group, proved to be extremely wary and difficult to hunt. Her age was estimated at 4½ years by Michigan DNR at a deer check-station.

Traditionally many clubs, NDA Branches and QDM Cooperatives have held buck poles where awards are given for heaviest bucks and those with the highest antler scores. With does you can have a similar challenge, but instead of antler score you can age the does based on toothwear. The doe with the most toothwear is the oldest. Some of these older does can also get quite heavy, so an award for the heaviest doe is also a lot of fun.

The best way to improve your deer hunting skills is to match wits with the most mature animals you can find. Unfortunately, in Michigan and some parts of the whitetail’s range, hunters still harvest more bucks than does, and the average age of the bucks harvested is younger than that of the does. As a result, mature bucks of 4½ and older are uncommon. This unbalanced harvest has resulted in a larger number of mature does, who grow wise to hunters. This makes them much more challenging to hunt than younger bucks. For this reason, I have become a much better hunter, have enjoyed and shared more tasty venison, and made many great hunting memories chasing the likes of Blondie. I am looking forward to many other memorable affairs in the future and encourage you to do the same!

Erik Schnelle of Michigan joined QDMA in 2004 and is now a Life Member of the National Deer Association. He is a Level 2 Deer Steward, President of NDA’s Michigan State Advisory Council, and is very active as a volunteer in the West Central Michigan Branch. He was named the 2019 National Volunteer of the Year.

View all Articles By Erik Schnelle