The Oldest Deer on Earth 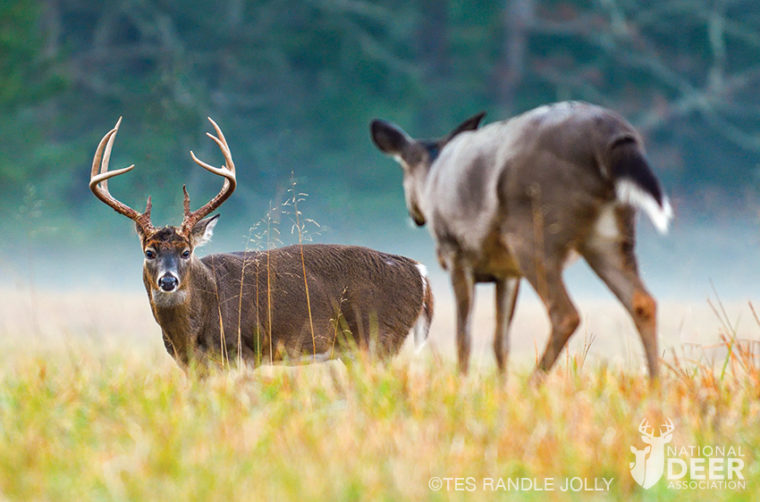 There’s a good reason we admire whitetails so much. Why we write about, paint and photograph them, hang them on our walls, and spend all year waiting for the day we can rise early and go see if we can outwit them. Why we prize venison among the most sublime and desirable meats. Why we want deer to have a place alongside us in this world, always. It’s because the whitetail, of all North America’s deer species extinct or living, is the most badass.

That’s not my opinion. It’s fact, backed by an astounding collection of feats of badassery. I realized several of them recently when I read Deer of the World: Their Evolution, Behavior and Ecology, by Valerius Geist. Sadly, it was Dr. Geist’s death in July 2021 at age 83 that prompted me to read the book, one of many that built his reputation as a top expert on North America’s hoofed mammals. Consider this essay part book report, part song of awe for the oldest, most bodacious deer on the whole planet.

That’s right. Whitetails are the oldest living deer species on Earth, even though they are uniquely of the “New World.” Their direct ancestor reached North America by crossing the Bering Land Bridge into Alaska, and fossils that are very difficult to distinguish from modern whitetails have been found in Florida that date back 5 million years. Geist put actual whitetails — Odocoileus virginianus — at around 4 million years old, but other experts debate this timeline with claims that scatter from 2 to 5 million years. The important fact is that all the other deer species on this continent measure their tenure in thousands of years, not millions. Moose crossed from Siberia since the end of the last ice age 12,000 years ago. Reindeer and red deer joined them around the same time, becoming what we know as caribou and elk on this continent. Mule deer and blacktails, like whitetails, are uniquely North American, but the fossil record leaves their origins debatable. Geist believed mule deer are a relatively new hybrid of whitetails and blacktails, but some deer experts argue otherwise. Regardless, neither have been around remotely as long as whitetails. 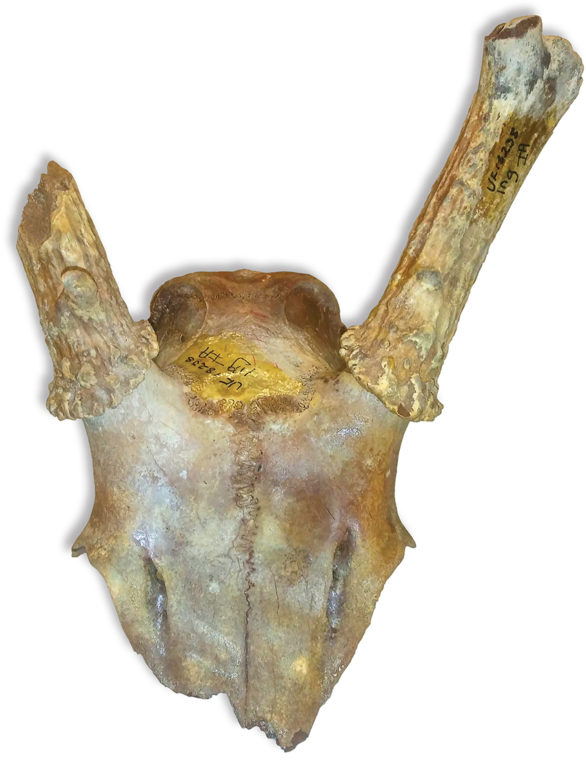 Age this! The fossilized skull and antlers of this whitetail buck were found at a site in Florida known as Inglis 1A, near the current Gulf Coast of Florida and the town of Inglis. Along with whitetails, the site produced fossils of saber-toothed cats, giant ground sloths, pronghorns and hyenas among many other species, all dated 1.6 to 2 million years old. Photo courtesy of the Florida Museum of Natural History.

To appreciate how long, hold their history up next to our own. There was a whitetail rut going on across North America long before our ancestors had hit two rocks together and discovered they could make a sharp flake that could cut meat off bone. Long before they had learned to create and control fire at will. Long, in fact, before modern humans were a thing.

Some animals specialize. Other animals are good at adapting. It’s not a contradiction to say that whitetails specialize in adapting. That’s their super-power. And it enabled them to quickly colonize North and South America and stay here for an extremely long time, through many tumultuous shifts in characters and scenery.

At one point in the Pleistocene, the whitetail’s range overlapped the ranges of 15 predators larger than coyotes. There was the American lion, which may have been as much as twice the size of a modern African lion.

Geist made me think about all the animals whitetails have shared this continent with in their long years here. At one point in the Pleistocene, their range overlapped the ranges of 15 predators larger than coyotes. There was the American lion, which may have been as much as twice the size of a modern African lion. Other big cats included American cheetahs, jaguars, plus saber-toothed and scimitar-toothed cats. There was the giant bulldog bear, perhaps the largest known mammalian carnivore ever, which could have stood and plucked you like a ripe pawpaw from your lock-on stand. Don’t forget the roaming packs of enormous dire wolves. Talk about tough neighborhoods. According to Geist, whitetails become somewhat more difficult to find in the fossil layers of that time, suggesting this nightmare array of fanged hunters kept them eaten down to relatively sparse densities. Yet, whitetails outlived all of those enemies. Compared to that carnivorous cadre, the predators whitetails face today are lightweights, literally.

Of course, whitetails weren’t the only food source for all those giant carnivores. There were 45 species of large herbivores that existed in the Pleistocene alongside whitetails, including the megafauna like mastodons and mammoths. Only seven of them were adaptable enough to survive all the changes that wiped out so many mammals at the end of that epoch. The seven, according to Geist, included mountain goats, musk oxen, bison, bighorn sheep, pronghorns, black-tailed deer, and white-tailed deer. 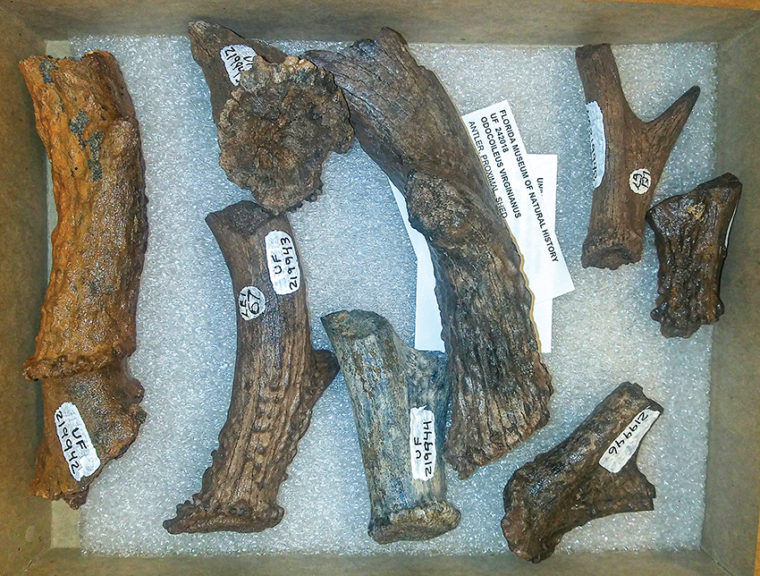 Now compare whitetails to those other six Pleistocene survivors I just listed. Those others live now in remote pockets of territory or unique regions. Alone in that group, whitetails are seemingly everywhere. As Geist pointed out, they thrive from a latitude of 18° south in Brazil to 61° north near the Arctic Circle. We hunt them from the frozen forests of Canada to the deserts of Arizona. We hunt them in the Everglades, where the world’s oldest deer still gets whacked by the closest living cousin of the dinosaurs. We hunt them within hearing of laundromats and leaf-blowers, and we pursue them deep in wilderness where you can hear your own heartbeat. Besides outlasting ancient enemies and climatic chaos, whitetails also brushed off intensive hunting and management by American Indians for upwards of 15,000 years. Then came intensive commercial exploitation by European colonists. Then came modern hunters. Then came interstate highways, crop depredation permits, urbanization, sterilization. Despite wave after wave of ancient and modern threats, we have more whitetails in North America today than perhaps… ever. Geist named them a deer at home in “ecological havoc,” which humans have certainly done our best to provide.

Most other prized game species are delicate and require special care to ensure we have enough to hunt. Not whitetails. They are the all-American deer, available to all of us, almost everywhere.

They can run like moose and jump like mule deer, and they can intermix the two as needed to evade pursuit in any landscape. They can find adequate food growing in the salty sands of the Florida Keys, the dry arroyos of the Rio Grande valley, and the manicured lawns of Chicago. They adapt to marginal extremes by down-sizing, giving us small forms like Coues and Key deer – a card other deer don’t play. There are no mini moose or dwarf elk.

Most other prized game species are delicate and require special care to ensure we have enough to hunt. Not whitetails. They are the all-American deer, available to all of us, almost everywhere, with no expensive trips or exclusive access required to hunt them. Instead, because they are so adaptable and resilient, modern whitetails must be managed wisely for their own health and that of the forest and other wildlife, which is the origin story of this organization. Unlike with some other game species, “unlimited” whitetails is not some lofty dream we pursue. It’s our reality.

“This is a story about an opportunistic way of life, a set of skills well mastered by white-tailed deer,” wrote Geist. “It has virtually evaded evolution, and that is supreme success. After all, evolution is de facto proof of incompetence, of difficulties mastered by only a fraction of the population after all normal means of epigenetic adjustment have failed, and of extinction barely missed. The whitetail was very good at avoiding extinction.”

Fossilized whitetail jawbone found at the Leisey Shell Pit near Tampa, Florida. Fossils from this site are dated to the early Pleistocene (1½ to 2½ million years ago) and include saber-toothed cats, mammoths and many other extinct mammals along with whitetails. Photo: Florida Museum of Natural History.

It’s a true story, but it’s history. There are new threats. I hold out hope based on all the above that whitetails can take whatever is thrown at them, that even human ignorance can’t end a multi-million-year-old survival specialist. But I also worry that some combination of evils could finally push them toward the edge. I don’t think chronic wasting disease will be their end, but pile it on top of other diseases, urbanization, politics, invasive species, legalization of wild venison for profit, anti-science populism, predators, and we might see a day where whitetails exist only as privately owned livestock.

I know many hunters yawn at the paleontology I’m sharing here, and I don’t recommend Geist’s book as light reading in deer camp. It’s a college textbook. But knowing that whitetails are the oldest deer makes me feel an even greater responsibility to be a good steward of this animal. We hold no less obligation to protect other deer, other game species, or any other wildlife. But after millions of years, I don’t want to be the factor that finally brings such a long run to a sad end.

That is why I’m glad to be a member of, and work for, this organization. Support the National Deer Association. We’re here to ensure a sustainable future for the most badass deer in the world.

Special thanks to the Florida Museum of Natural History for the photos of fossilized whitetails that accompanied this story.