The Rewards of Restraint 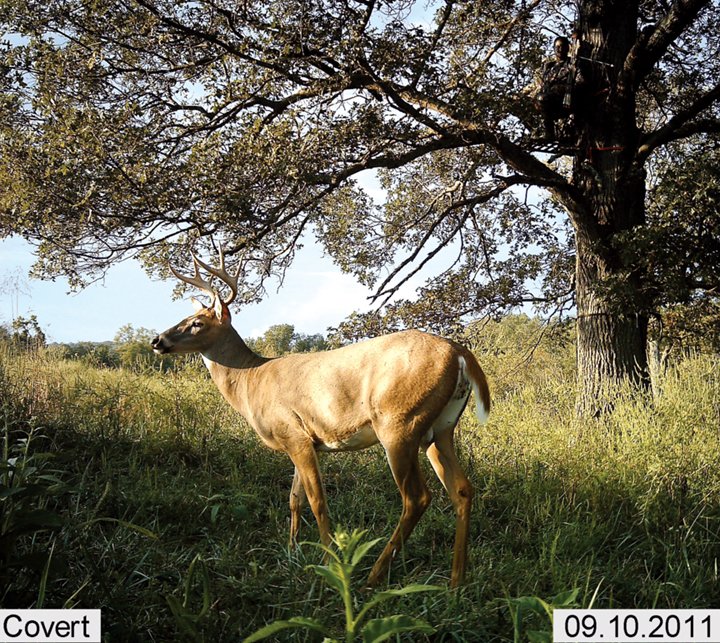 Look carefully at the trail-camera photo above, taken by QDMA member and private lands biologist Joe Lacefield of Kentucky. I love this photo because it captures part of the spirit of Quality Deer Management in a single image. Here is a hunter (Joe’s brother, Dickey Lacefield) in a tree, on a beautiful day, in possession of his bow, watching a fat buck that is posing broadside. It’s a chip shot, yet Dickey is sitting. His bow is still on its hook, and he is merely studying the deer because he estimates the buck to be 2½ years old – short of his particular age-based harvest goal.

This photo captures one of the many rewards of restraint.

Too often, hunters involved in QDM are eager to find reasons to kill bucks rather than eager to find reasons not to kill them. Too many hunters have fallen into acceptance of faulty or unproven ideas about buck harvest, saying they must remove certain bucks or risk some damage to their QDM efforts or to the deer population. On this, QDMA’s advice is simple: Set a realistic age-based harvest goal for your situation, give hunters the green light on bucks that meet it, the red light on bucks that don’t. There are some exceptions that can be added at advanced levels, and that’s another discussion, but there are no bucks out there that you must kill or risk dire consequences.

I think the best way to combat these faulty reasons for killing bucks is to contradict them with reasons for not killing bucks. The most obvious have to do with the benefits of building age structure and balancing buck:doe ratios: more rut behaviors witnessed while hunting, more rut sign in the woods, a more intense rut, fawns hitting the ground earlier, and so on.

But there are many other reasons less talked about. Before the advent of QDM, the hunter in this photo would be standing, drawing his bow, and might already have put an arrow through this deer – assuming he hadn’t already shot the buck as a yearling! Before QDM, how many deer hunters ever sat and watched an antlered buck at close range? Very few. A deer approached, antlers were spotted, arrows or bullets were flying.

Under QDM, we spend time watching live bucks that we don’t intend to kill, and we gain knowledge. We witness behaviors we never saw before, practice the study of body characteristics relative to age, learn how deer interact with each other, and hear the sounds they use to communicate. These things make us better hunters and stewards of the animal. You can’t take a photo of what you learned from a buck you didn’t kill, or take your knowledge to the taxidermist, but these rewards still count. They are valid and useful, unlike the pervasive myths about bucks you must remove.