The Science of Fawn Survival: Leave It Where You Found It 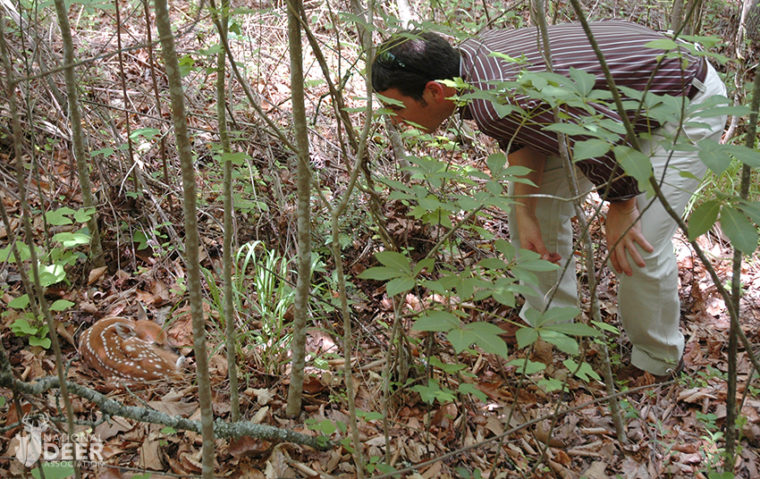 So, you found an abandoned fawn and you’re wondering what to do with it. You may have even rescued it, and now that you brought it home you are wondering who to call. Is there anyone who will take it to raise? What does it eat? Can you house-train it? I know you mean well and want to help the fawn, so follow the best advice from science: leave the fawn where you found it. If you already removed it from the woods, take it back immediately to its hiding spot, or place it in good forested cover as close as you can get to the place you found it.

Let’s look at the science that explains why the fawn is well adapted to survive just fine without your intervention.

It’s Likely Not Abandoned At All

Every spring, people who stumble across fawns expect to see a watchful mother nearby, and when they don’t, they immediately assume the fawn is “abandoned.” This is understandable, but remember that the needs and survival behaviors of newborn deer are completely different than those of newborn humans.

Not only do fawns spend most of their time separate from the doe – twin or triplet sets of fawns hide separately from each other.

Until a fawn is old enough to be fully mobile and able to outrun danger, the doe spends most of each day separate from the fawn to avoid attracting predators by her own presence and scent. Research at the Smithsonian Conservation Biology Institute in Virginia found that in the first three to four weeks after a fawn’s birth, does visited fawns primarily around sunrise and sunset, and visits were only long enough to nurse.

Visits increase to three to four times a day as the fawn gets older and more mobile. In between visits, the fawn instinctually finds the best nearby cover for hiding, and the doe may not know exactly where the fawn is located each time she returns, so she calls to it until it responds. Otherwise the fawn’s best defense is to remain hidden and freeze if danger approaches. Dr. Nadine Jacobsen of UC-Davis discovered that a hiding fawn’s heart rate actually drops significantly when it is alarmed, enhancing its ability to remain still and undetected. Not only do fawns spend most of their time separate from the doe – twin or triplet sets of fawns hide separately from each other. 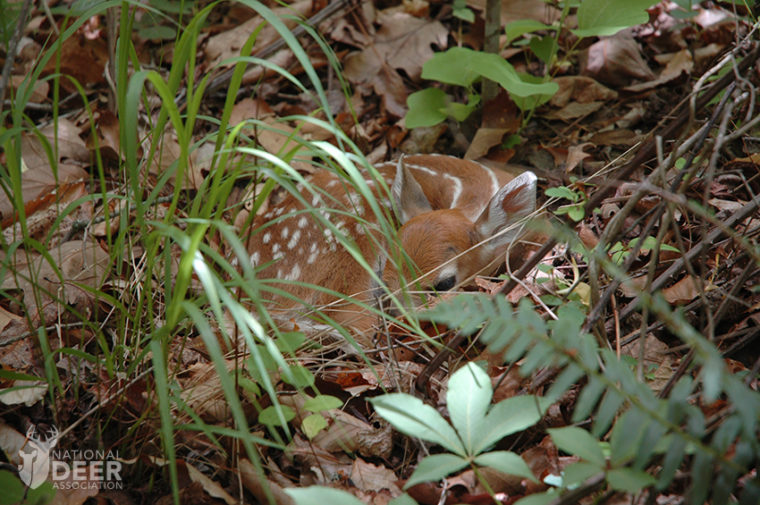 A hiding fawn’s heart rate drops significantly when danger approaches, enabling it to remain extremely still. Hiding separately from its mother is a survival strategy in the first weeks of life, when it is too young to outrun danger.

This is why the vast majority of “abandoned” fawns found each spring are not actually abandoned and don’t need anyone to “rescue” them. It’s normal for the fawn to be alone during most of its early weeks of life. This behavior enhances fawn survival. Next time you are fortunate enough to encounter a fawn, take a quick photo to remember this amazing moment, then be on your merry way.

So many fawns are “rescued” by well-meaning citizens every spring that the Missouri Department of Conservation once studied the long-term fates of such deer. Over two years, they radio-tracked 42 deer that were “rescued” by the public and raised in captivity by wildlife rehabilitators until they were weaned and old enough to be released back into the wild. More than half of them (52%) died within 30 days of release. Only 9 of them (23%) survived beyond 100 days. Of those that died, most were killed by predators.

The scientists noted that survivors tended to be those that ended up around homes and neighborhoods, where deer usually become nuisances and end up presenting a danger in traffic. They summarized their findings this way: “Unfortunately, the money and effort expended to raise orphaned and ‘picked up’ fawns does not result in the animals’ long-term survival and does not appear to be a humane alternative.”

The Doe Will Not Reject the Fawn If You Touched It

If you’re reading this and have an actual fawn in your house, you may think putting it back in the woods won’t work because you already touched it. That’s okay. The doe will not reject her fawn simply because you handled it.

Scientists studying fawn survival routinely capture very young fawns, some only hours old, handle them, place small tracking collars on them, and release them. Researchers with Minnesota Department of Natural Resources studied whether capture and handling caused abandonment or death from stress. They assumed any death within four days of capture resulted from abandonment or capture-related trauma. Out of 89 fawns, 83 of them (93%) survived beyond four days post-capture. Of the six that died, four of them were killed by predators, not stress or abandonment.

Eleven of the 89 fawns in the study had to be chased by researchers before they could be caught, handled and collared. All of those fawns survived beyond four days.

Human scent on a fawn will not likely cause the doe to reject it, and the stress of being handled by people will not likely kill the fawn. Take it back to the woods quickly. 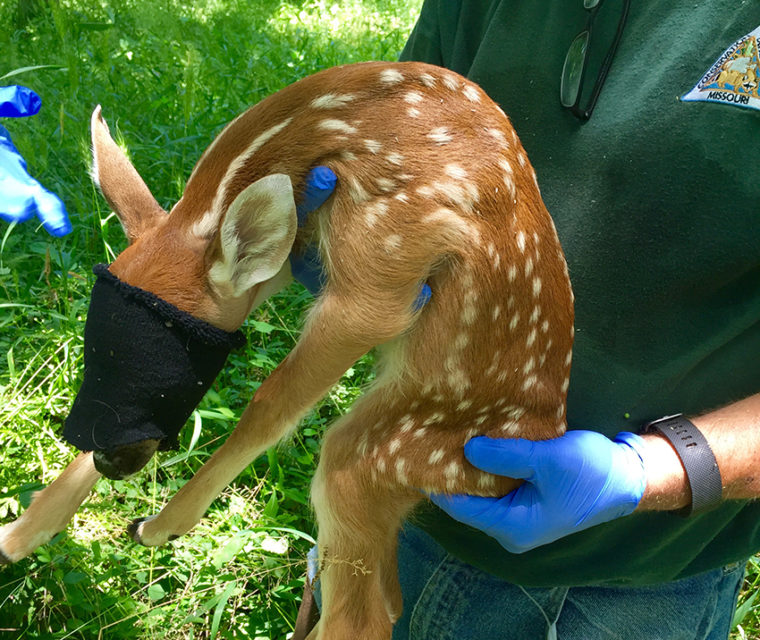 Scientific studies of fawn survival involve capturing and handling of very young fawns. These studies prove that such handling almost never causes abandonment or injury. (The blindfold seen in this photo is intended to reduce stress on the fawn during the few minutes it is being measured and tagged).

Every spring, the supply of “rescued” fawns far outstrips the availability of licensed facilities that can take orphaned or injured deer. These places are few and far between, and those that exist do not want more fawns. Their phones ring every spring. Zoos, wildlife exhibits, and state wildlife agencies are not eager to take deer, either.

If most people who merely encounter hiding fawns would leave them where they find them, wildlife rehabilitators would be better able to handle the rare cases of genuinely injured or truly orphaned fawns.

In most states, it is illegal to keep and try to raise wild animals in captivity. There are good reasons for this. At the very least, wild animals seldom make good pets. Deer especially do not make good companion animals. Once a fawn becomes habituated to people, the long-term outcome is rarely good for the deer or the people.

Leave It Where You Found It

The science is clear: A fawn’s best chance to survive and live life in the wild as it should is for you to leave it where you found it. If you already handled it and moved it, it still has a better chance of thriving if you return it immediately to the woods where you first saw it. That’s where it belongs and where it is well equipped and adapted to survive.

Support the National Deer Association’s effort to educate the public and deer hunters about the science of deer conservation and management. Become a member today. Thank you!