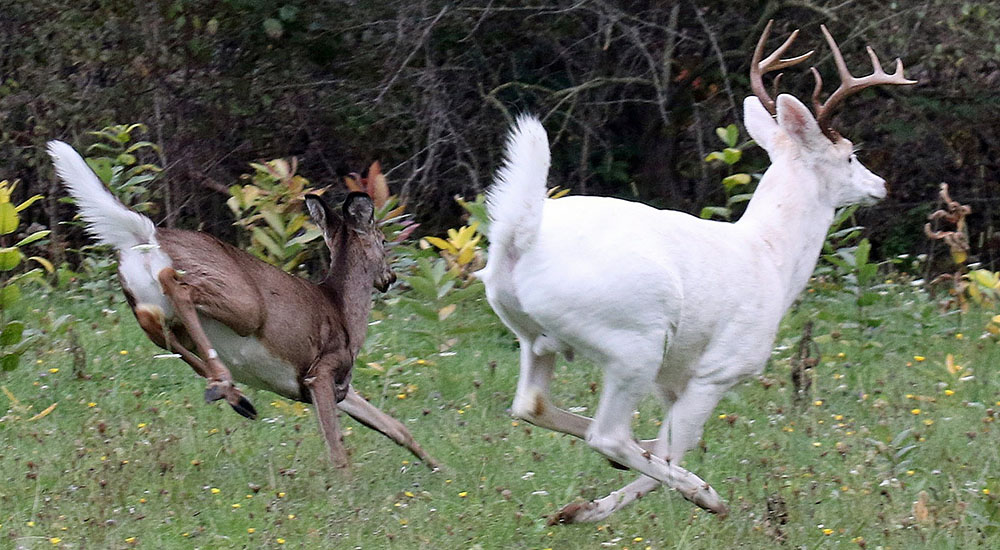 One of the most interesting things about whitetails is the great variety in their appearance. Regional differences in size and anatomy, the seemingly limitless variations in antler characteristics and occasional abnormalities like vestigial ivory teeth have long fueled fascinating conversations around deer camp.

Recently, I had the opportunity to check out a herd of deer in which an unusual trait has become common. Many of the deer in this herd exhibit leucism, the genetic trait which causes a lack of pigmentation, resulting in deer which are white as snow. This propensity for white coloration has resulted from prescribed protection of these deer from hunters, an absence of predators which might otherwise find them with ease, and the enclosure of the entire property. But this isn’t a high-fence game farm; and the fence wasn’t built to keep wildlife in. It was built to protect the massive stockpiles of munitions that once were stored there by the U.S. Army. I’m talking about Deer Haven Park, home of the Seneca White Deer.

Located in the former Seneca Army Depot in the Towns of Romulus and Varick, at the heart of New York’s Finger Lakes Region, the 3,000-acre preserve is managed to accommodate the largest herd of white whitetails anywhere.

To be clear, leucistic deer are not albino. Albino animals lack the pigment melanin throughout their bodies, giving them the characteristic pink eyes that many are familiar with. When animals exhibit leucism, pigmentation is absent only from their skin, hair, fur, feathers etc. but not the eyes. Some of the white deer of the Seneca Army Depot are “piebald,” having both white and brown blotches of hair. The white deer at the depot are not known to exhibit any of the deformities sometimes associated with piebaldism or leucism in whitetails.

The story of this herd began in 1941, when the now defunct Army Depot was constructed, and along with it a fence that ran its perimeter. Over five-hundred concrete “igloos” were erected as storehouses for munitions.  The development of this arms storage facility helped to ensure the supply of weapons for our troops during World War II.  It wasn’t until after the war had ended that, in 1949, the first white deer was observed on the base. At that time, Base Commander Colonel Frank Kemble Jr. issued an order that protected the white deer from harvest. As the population grew, and the acreage of the enclosure did not, it became necessary to hunt deer on the base to prevent their starvation – but protection for white deer remained. Over time, the proportion of white deer in the herd increased.

The white deer of the Seneca Army Depot became legendary to New York wildlifers and outdoorsfolk from all walks. The Army continued using the Depot for over 50 years, so public access to the base was limited and rare. Everyone had heard of the base’s white deer, but few had seen the animals up close. Hopeful rubbernecks would drive past the preserve to catch the occasional glimpse of the ghostly animals through the Depot’s fence.

In the late 90s, news spread that the Depot would be closing and ownership would be transferred to the Seneca County Industrial Development Agency (IDA). Eventually, the property could be sold into private ownership. The future of the property became uncertain. With the fate of the white deer in the balance, a small group of conservationists formed the nonprofit known as Seneca White Deer.

After years of searching for the right private buyer, the IDA struck a deal with a local businessman. In 2016, Earl Martin purchased the Depot with plans to expand Seneca Ironworks. This put the property back to use and brought jobs to the area – but the deal also came with a secure future for the white deer. Of the 7,000-acre depot, 3,000 acres became Deer Haven Park. Here, Seneca White Deer offers bus tours to the public out of their visitor center.  The tickets sold for these tours provide the funding to operate the preserve. Dennis Money, a QDMA member and one of the original founders of Seneca White Deer, now President of the organization, reminded me that while the rare white deer provide the draw for tourism, the park is a refuge for a multitude of native wildlife.

“To me, the importance of the white deer is that they will get people excited about the outdoors again,” said Money, “It helps them to appreciate habitat for all wildlife.”

And now, like me, you know the story behind an unusual whitetail, the Seneca White Deer.

Tim Russell is a certified forester with Green Fire Forestry & Wildlife Services of Pitcher, New York. He formerly served as QDMA’s Young Forest Specialist in New York. Tim earned his forest resources management degree from SUNY-ESF and previously worked as a forest technician at Forecon Inc. and F&W Forestry Services, where he marked and scaled timber, inspected logging operations and conducted forest inventories. He and his wife, Amy, reside in Cortland, N.Y.