This Strange Buck Was a Throwback to Extinct Whitetail Ancestors 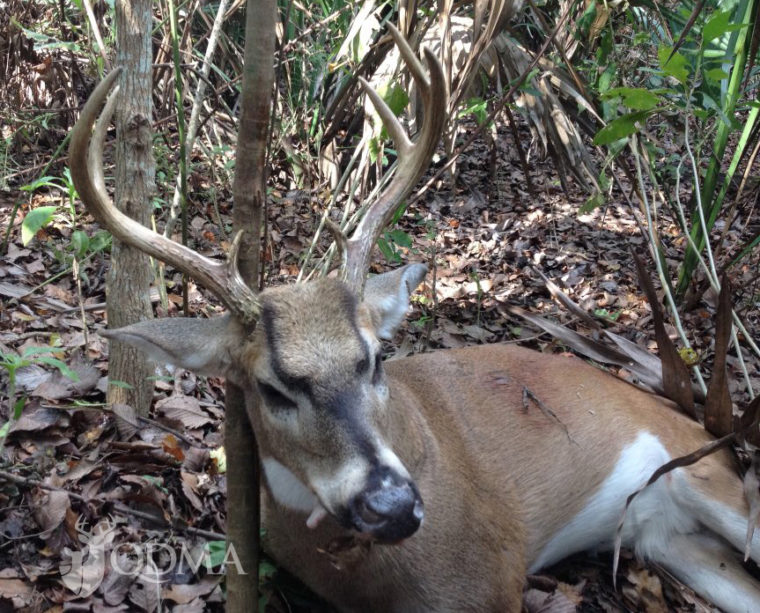 Each one of us is the product of our ancestors, and more recent relatives have the greatest influence on who we are. But sometimes, through the weird acoustics of the sprawling genetic cave from which we crawled, an echo reverberates up from the depths to be heard more clearly than it should by those of us camped at the cave’s opening. This is true of all life, including whitetails. I became fascinated recently by a Louisiana buck that appears to be carrying genetic echoes from deeper in the whitetail ancestry than some experts have ever seen.

In January, Wilbert Collins Jr. of Louisiana messaged me through Twitter and shared photos of a buck he killed back in December 2016. I was instantly struck by the distinct facial stripes you can see in the photos we’ve included here. A clear black “Y” runs up the middle of his nose, divides at his eyes, accents his eyebrows, then continues up to the antler bases. I’ve seen whitetails with darker facial and forehead coloration overall that seemed to be a regional feature, and of course mule deer and blacktails have distinctly darker faces and foreheads than whitetails, but I’d never seen a whitetail with eyeliner like this. One species came to mind, and I Googled images of muntjacs, a primitive deer species existing today in South Asia. Bingo. If you look them up, you’ll see very similar black stripes on the faces and heads of muntjacs.

Wait, this gets weirder.

Muntjacs are unusual in that they have antlers and long, fang-like canine teeth. The Louisiana whitetail also had canine teeth. 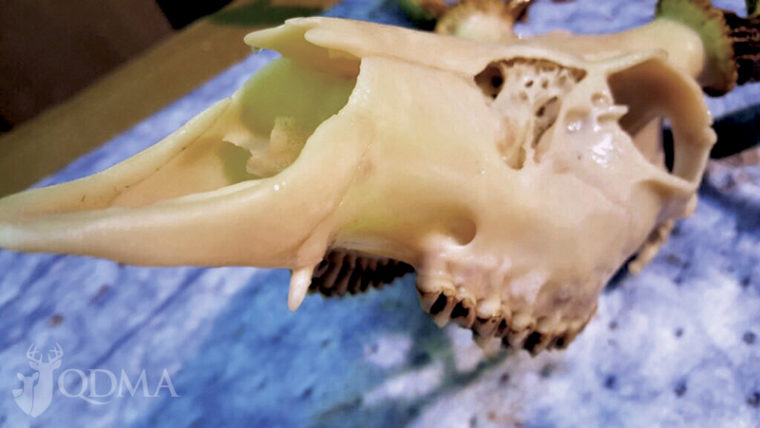 It wasn’t until Wilbert Collins Jr. was examining his buck up close that he noticed the buck also had long canine teeth.

You’ve probably heard of or seen photos of whitetails with small upper canine teeth – which they should not have. You may have even killed a deer like this. They are rare, but I know more people who have killed deer with canine teeth than people who have won millions in the lottery. These canines are genetic throwbacks to fanged ancestors shared by whitetails and muntjacs, but most of those I have seen in whitetails are small pegs, too small even to break the gumline. They are usually only discovered by someone who cleans the skull for a European mount, so their frequency among whitetails is not known. But the fangs on Wilbert’s buck are the longest I’ve ever seen.

I e-mailed the photos to Valerius Geist, professor emeritus at Canada’s University of Calgary, author of Deer of the World: Their Evolution, Behavior and Ecology, and a renowned expert on the biology of North America’s hoofed mammals.

“I have seen a faint mask on white-tailed bucks, but nothing as prominent as this buck, and I recall seeing canine teeth on whitetail bucks only once,” he wrote in reply. He said it was not just chance that the stripes and the canine teeth appeared together in one deer. These primitive features are probably genetically linked.

I also shared the photos with Jim Heffelfinger, wildlife science coordinator with Arizona Game & Fish and author of Deer of the Southwest, a book that includes one of the best overviews I’ve ever read of the evolutionary history of the entire deer family.

“That stripe is the strangest thing I’ve seen in whitetail head coloration,” said Jim. “I’ve seen some weird whitetails, but I’ve never seen head stripes like that. This also might be the biggest canines I have seen. A lot of times these canines just grow right out of the maxillary bone, but this one actually has kind of a socket for that tusk.” 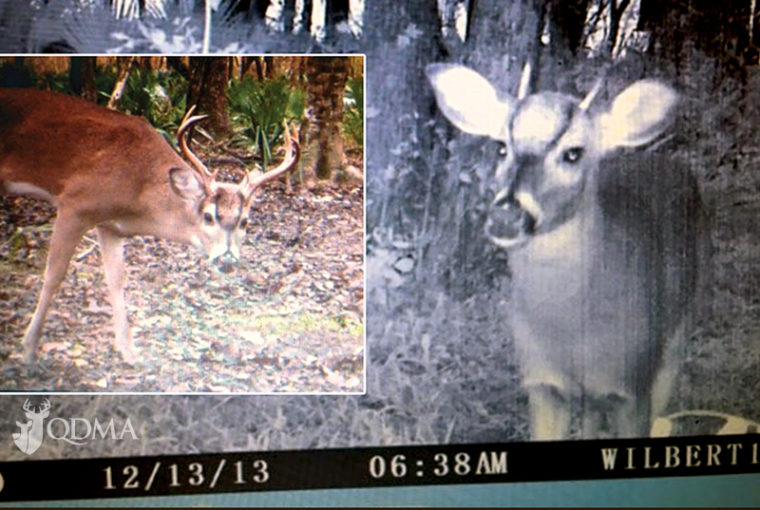 Wilbert had trail-camera photos of the strange buck as a yearling in 2013 and continued to get photos through 2016 when he killed the buck as a 4½-year-old.

To show me where this deer came from, Jim took me back more than 7 million years to the Miocene epoch and across the Pacific to Asia. Dremotherium was a small deer-like animal, and the “bucks” had vampire-like fangs but no antlers. Evidence in the fossil record suggests this species branched into several types of deer that grew both fangs and antlers, including the ancestors of muntjacs and other Eurasian deer, elk and caribou. As antlers evolved and became larger, they replaced fangs, which faded away in most species. Some of those antlered ancestors crossed the Bering Land Bridge into North America between 5 and 7 million years ago.

On the new continent, three distinct deer species began to appear in the fossil record at this time. One was a deer with palmated, moose-like antlers that lived on the Great Plains and west coast. Another was a Rocky Mountain species with a stockier body and three-tined antlers. A third was more widespread and obviously better adapted, as it was the only one to survive the Pleistocene epoch: Odocoileus. Four million years later, it is essentially unchanged. We know it as the whitetail. Along the way, Odocoileus branched off to fill geographical niches and became mule deer, blacktails and Coues deer.

So, tracing back millions of years and across the Bering Sea to Asia, whitetail ancestors tried out several blueprints involving fangs, and traces of those blueprints are still found in whitetail genetics.

“This is something that just crops up once in a while, and I’ve always just called it a throwback to earlier days in deer evolution,” said Jim. “There may be some latent genes in there, and under certain combinations you get this throwback from early history when deer did have canines.” 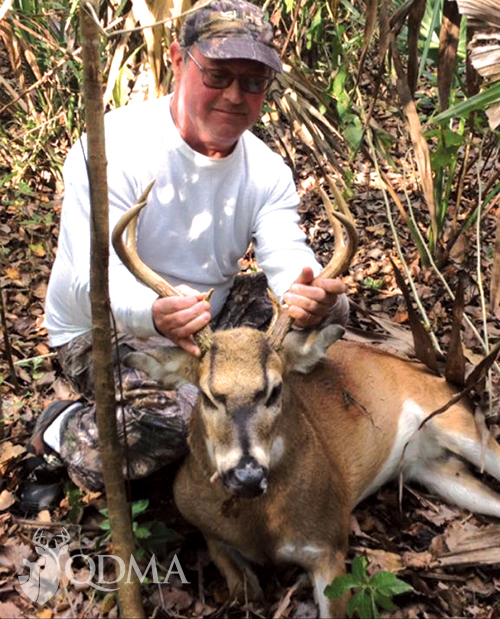 Wilbert Collins Jr. of Louisiana with his buck, killed in December 2016.

They also apparently, at some point, had facial stripes like modern day muntjacs. Hair color doesn’t fossilize, so Wilbert’s buck very likely gives us a glimpse of what those ancestors might have looked like that crossed the Bering Land Bridge during the last Ice Age. The mind-blowing part to me is this: Wilbert’s buck is an echo of the ancestor shared by muntjacs and whitetails, but the two species branched off from that ancestor over 5 million years ago.

Here’s another thing Jim told me that blew my mind: Valerius Geist points out that the black patches on a modern whitetail’s lower jaw are located exactly where the fangs would have stuck out from the upper jaw in ancestral deer, and he theorizes that those patches may have been there to accentuate the white of the ivory canines. The fangs have evolved away, but the patches remain. Go look at the shoulder mounts on your wall. It’s likely they all have them. 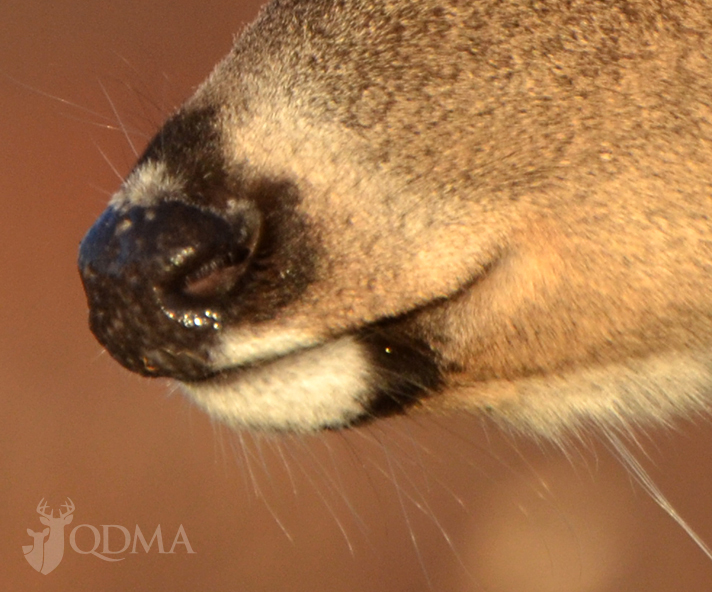 The black patches on a whitetail’s lower jaw are located right where fangs would have stuck out of the mouths of their ancestors. They may have helped make the teeth more noticeable.

How rare is Wilbert’s Louisiana buck?

“With the coloration and the fangs, I can’t give you a percentage, but it is rare,” said Jim. “People send me deer oddities because they know I like strange things, and I’ve never seen that dark stripe like that. It didn’t show up because of some kind of environmental influence, it has to be some underlying genetic connection. So, it wouldn’t surprise me if another animal like that showed up in that same area.”

And on that note: The last photo Wilbert sent me (seen below) was a trail-camera photo taken last December. It showed a young Louisiana buck. Over its eyes? 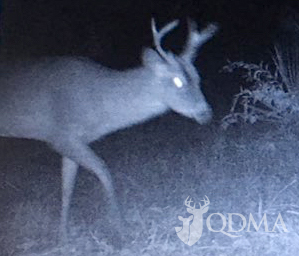 The next generation? Wilbert got this photo in December 2018 of another buck with facial stripes that’s still out there.