To Intercept Bucks in Daylight, Take Lessons From GPS-Collar Research 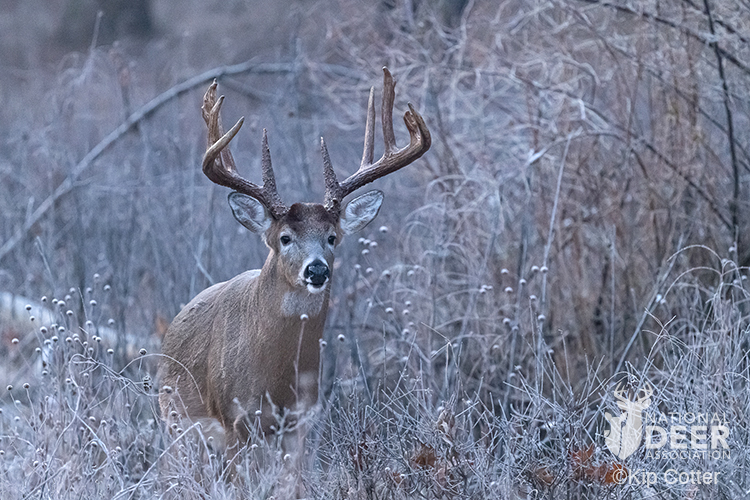 it’s fairly common knowledge that hunting near roads or hunting the same stand repeatedly is unlikely to lead to hunting success, especially when targeting mature bucks. But this begs the question, “Why?” The obvious answer is these areas receive more hunting pressure and are therefore riskier, so deer avoid them. Hunters also know that forage-rich areas like food plots represent an important resource for deer. So how do deer respond when an area is risky but also contains important resources?

Whitetails and nearly all other prey species must balance resource acquisition with risk exposure on a daily basis. They do this using strategies wildlife researchers refer to as “spatial” and “temporal” avoidance – space and time. Basically, they either avoid risky areas altogether, or shift their use of those areas to less-risky time periods.

“These findings make sense to experienced hunters who know that deer move relatively quickly in food plots during the day, grabbing a bite here and there, before eventually making their way back to cover.”

This probably isn’t new information to most readers, who know that overhunting a food plot will cause deer to use it only at night. However, in our own hunting experience, we have also noticed that does are more likely to use food plots during the day, even those hunted regularly. This made us wonder whether what we were seeing was a true difference in resource selection and risk avoidance by bucks and does, or whether the does we were seeing were simply younger and less experienced. These questions led us to pull a dataset from South Carolina that was amassed by Dr. Steve Ditchkoff and several former Auburn Deer Lab graduate students. The dataset spanned nearly 10 years and included fine-scale GPS movements for 54 bucks and 57 does. The average age at capture was 4 years old for does and 2.8 years old for bucks.

The study was conducted on a portion of a 14,000-acre private property. The site consisted of four primary cover types: natural pine (60% of the study site), planted pine (19%), hardwood drains (10%), and food plots (6%). Natural pine areas consisted of frequently burned, open canopied, mature loblolly and longleaf pine stands. The planted pine areas consisted of young, densely planted loblolly pine trees. Hardwood drains were typical for the Coastal Plain of South Carolina, with mature trees of various species in the overstory, and a dense thicket of vines, shrubs, and other woody vegetation in the understory. Food plots were generally planted each fall in a small-grain mix.

While it seems obvious that deer would be more vulnerable to hunters in food plots and natural pine stands on this particular property, we quantified deer risk in each cover type by climbing into each permanent hunting stand and using a laser rangefinder to determine the area around each stand in which deer would be visible to hunters. We found this area was comprised of 23% food plot, 4.5% hardwood drains, 13% planted pine, and 60% natural pine. This information not only confirmed that deer were more visible to hunters in food plots and natural pine, but that there was a significant bias in stand placement toward food plots. While 23% of the viewable area from permanent stands was food plots, they were only 6% of the landscape in the study area. There was also a bias against hardwood drains. Less than 5% of the viewable hunting area was hardwoods, but they were 10% of the study area.

The next step was to determine which of these areas deer preferred, and at what time of day, during the hunting season. We did this using resource selection functions, which tell us the relative preference for a given cover type compared to its availability throughout a deer’s home range. Not surprisingly, both bucks and does selected for hardwood drains and planted pines during the day. Conversely, food plots were the most preferred cover type by both sexes at night, as seen in the heat maps of movement below. However, doe selection for food plots during the day was greater than for bucks.

Stand sites on the study area favored food plots and avoided low-lying hardwoods, affecting deer use of these areas. GPS collar data showed bucks and does preferred to use hardwoods and planted pines during the day and feed in food plots at night, as seen in this “heat map” of deer use at one location on the study area.

Because the does in our study were, on average, more than one year older than the bucks, this demonstrates that greater daytime use of food plots by does is driven by more than just the wisdom that comes with age. Specifically, we believe does may be forced to use high risk areas like food plots during risky periods – in this case legal hunting hours – because of their smaller body size and increased nutritional demands, whereas larger bucks are better able to forgo foraging opportunities during risky periods to reduce predation risk from hunters.

This relates back to white-tailed deer biology. Larger deer have a larger rumen so, on average, bucks are capable of consuming greater quantities of forage than does. This means the nutrient content per pound of forage matters less for bucks than for does, because they can consume more of it. However, that doesn’t negate the importance of good habitat management for bucks: More high-quality forage is always better. Another factor likely driving these differences is the fact that many does on our study site were still lactating during the hunting season, which increases nutritional demands.

“Although deer are more likely to be present in dense cover during the day, their lower movement rates in those areas can negatively impact your chances of encountering them there.”

These findings make sense to experienced hunters who know that deer move relatively quickly in food plots during the day, grabbing a bite here and there, before eventually making their way back to cover. Once in an area of low risk such as dense vegetation, deer often bed down to ruminate, occasionally getting back on their feet to casually forage. When you consider the nighttime movement data, it becomes immediately apparent how important hunting pressure/risk is in driving these movement patterns. Specifically, movement rates were consistent across cover types for both sexes at night, and averaged 150 to 200 yards/hour.

Combining these findings gives great insight into the daily cycle of deer movements. They move freely throughout the nighttime period, foraging in food plots and other food-rich areas with limited cover. As daytime approaches, movement rates increase until they return to areas providing dense cover, where their movement rates are lowest. Then, as night approaches, deer get back on their feet and repeat the cycle again. A good example of this is seen in the map of one deer’s movements shown below.

This deer’s movements display the typical behavior on the study site, with daytime locations (and lower movement rates) in the heavier cover of hardwoods and planted pines, transitioning to food plots as darkness arrived. This map is based on GPS-collar locations.

Applying This information to Hunting

How can we apply this information to increase our hunting success? Should we abandon food plots and place all our stands in areas providing heavy cover?

While it is true that deer on our study area selected strongly for hardwood drains during the day, it is important to note those areas received limited hunting pressure. If, instead, hunting pressure was focused on hardwood drains, it is likely deer selection for those areas would decrease. A study in South Dakota confirmed this. Specifically, they observed that deer moved from forested areas to agricultural fields during the day because bowhunters, and thus risk, were concentrated in the forested areas where hunters could hang treestands.

The reality is deer move away from pressure, meaning hunting pressure is a better predictor of deer behavior than cover type alone. Another thing to consider is that, although deer are more likely to be present in dense cover during the day, their lower movement rates in those areas can negatively impact your chances of encountering them there.

A buck’s 24-hour movements reveal two opportunities other than sitting over food plots or trying to hunt him in dense cover. The black boxes show two daylight transition areas where this buck could be intercepted in the open.

So, if moving all your stands to dense cover isn’t the answer, what is? The map above shows a 24-hour movement cycle for one of the mature bucks that was part of our study. Notice the lines connecting each GPS point overlap quite a bit in the natural pine stand between the food plot and the hardwood drain in the left third of the map. A travel corridor in this area would be a great place to intercept a buck leaving the food plot in the morning or returning to it at night. Another ambush point can be seen in the thin strip of natural pine separating the two hardwood drains in the right side of the figure.

“The reality is deer move away from pressure, meaning hunting pressure is a better predictor of deer behavior than cover type alone.”

About the Authors: Dylan Stewart is a master’s student at Auburn University. His research interests are driven by his passion to improve habitat quality for focal game species such as desert bighorn sheep, mule deer, and white-tailed deer. Follow Dylan on Instagram. Dr. Will Gulsby is an Associate Professor of Wildlife Ecology and Management at Auburn University. His research interests primarily focus on management of game-species populations and their habitats. Follow Will on Instagram.

About Dylan Stewart and Dr. Will Gulsby:

View all Articles By Dylan Stewart and Dr. Will Gulsby