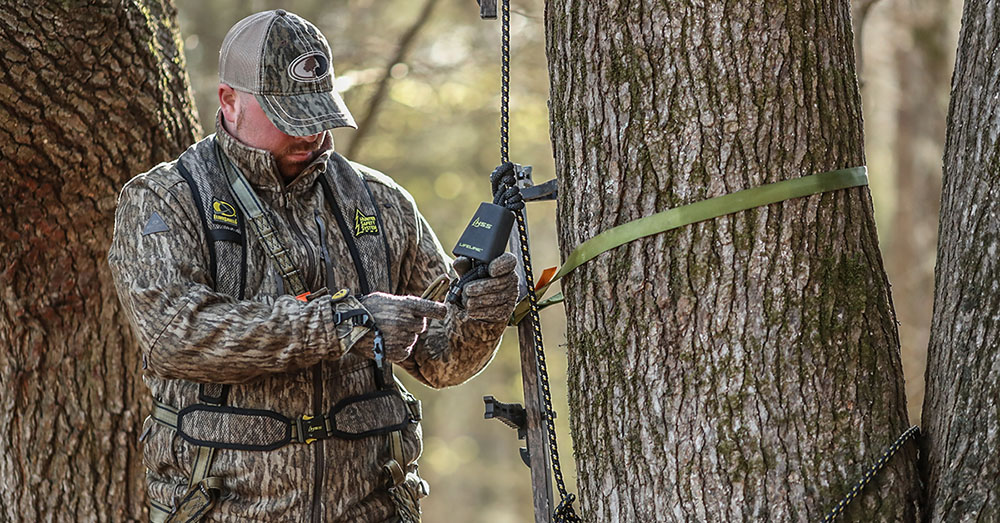 Can we stop the insanity? Can we just get through one deer season without a family having to bury a loved one who fell from their deer stand? Yes, deer hunting is our passion, but is it worth risking permanent injury or death? The vast majority of deer hunting injuries and deaths involve treestand falls, and those accidents are 100% avoidable. Yet here we are, with most states’ deer seasons not even open yet, and the news reports of treestand injuries are already trickling into my social media newsfeeds. Just yesterday I came across a GoFund Me page for a deer hunter who recently fell 25 feet from his treestand. Fortunately he will live, but he suffered serious injuries and has no medical insurance. Hospital bills are piling up, and he is the sole provider for his wife and kids. For whatever reason, he didn’t see it necessary to wear or properly use a safety harness.

Sadly, this will be just one of many similar stories this season. Some will end much worse. A quick search of GoFundMe revealed a staggering number of treestand accidents. According to Glen Mayhew, president of the Tree Stand Safety Awareness Foundation (TSSA), there were approximately 3,000 treestand-related accidents in 2018 that resulted in injuries. And while that number seems astonishing to me, it is actually down nearly 50% from 2010. We are at least heading in the right direction, but not nearly as quickly as we should.

So why are some deer hunters still climbing 20 or more feet into a tree without a safety harness and lifeline? In this day of 24/7 news and social media, I doubt anyone could plead ignorance on the matter. I don’t think there’s a deer hunter alive who hasn’t heard or read about the dangers of falling from a treestand. In fact, most of us know someone who has fallen.

I don’t know if I’ll ever live to see a deer season without a single treestand-related fatality, but I certainly think it’s a worthy goal. And I believe it’s an attainable one.

I also have a hard time believing it’s a financial issue. Every new treestand comes with a safety harness, and I’ve seen numerous people on social media offering them up for free to anyone in need. Besides, most of us spend plenty on licenses and tags, equipment, leases, and gas to get back and forth to our hunting area. A safety harness isn’t much of an added expense. Just like a good sharp knife, it should be considered essential equipment to any deer hunter hunting off the ground.

“I think it boils down to the ‘It’ll never happen to me’ mindset,” said Jay Everett, Marketing Manager for Hunter Safety System. “When interviewing hunters who survived falls, that seems to be the first thing out of their mouths. We’ve got to stop this kind of thinking. It can happen to anyone, of any age, at any time, and you almost never get a warning.”

And we’ve shared some of those accounts previously here on DeerAssociation.com:

Living to Tell of a Treestand Fall: “It Happened in a Split Second”

Thoughts While Falling From a Treestand

Impact! One Hunter’s Fall From a Deer Stand

Can we realistically get the annual number of treestand accidents or even deaths down to zero? Probably not. There are some deer hunters out there who, regardless of how many articles we write or how many stories of treestand accidents they read, will never wear a safety harness. These are the same folks who refuse to wear seat belts in cars or helmets while on a motorcycle. They are determined to live life on their terms. So, the remainder of this article is for the rest of you. Those of you who care about your personal well-being, as well as the impact your death or serious injury would have on your friends and family. If that’s you, let’s look at some ways to minimize this ridiculous annual cycle of treestand accidents.

All Stand Types Can Be Dangerous

The first step is obvious: Always wear and use a safety harness regardless of the type of treestand you use. Most folks using hang-on stands and even climbers understand this. However, many ladder-stand hunters seem to be under the false impression that because they aren’t as high in the tree, or because their stand has a built-in ladder, that it’s somehow not as dangerous. That simply isn’t true.

“I often hear the excuse ‘I don’t hunt from a tree stand, I hunt from a ladder stand,’ said Mayhew. “Hunters don’t perceive ladder stands as treestands and, therefore, don’t consider the need to take the same safety precautions. Ladder stands consistently account for 20 to 25% of treestand falls based on my data.”

That would be a significant reduction in the number of treestand injuries if we could simply get ladder-stand hunters to wear a safety harness. The take-home message here is that no matter what type of stand you are hunting from, they are all subject to equipment failure, and any hunter can lose their balance and fall.

Peer Pressure Can Be Good

If you already wear a safety harness, that’s great! Now, make sure your friends or others hunting with you are wearing theirs as well. This is one case where peer pressure is a good thing. Urge them to make the right choice. If they are hunting on your land, insist that they make the right choice. Don’t be the guy or gal who loses a friend to a treestand fall and lives with the regret of not speaking up.

Always Be Attached to the Tree

The second step to greatly reducing these accident numbers goes beyond just using a safety harness. Mayhew was quick to point out that in 21% of treestand falls the hunter was wearing a safety harness. But that harness doesn’t do you any good if it isn’t attached to the tree the entire time you are off the ground. Many falls occur getting into or out of the deer stand, either prior to hooking the safety harness to the tree or just after unhooking it.

If you are using a climbing stand, attach your harness to the tree before you ever begin your climb and simply move your point of attachment up the tree with you as you go. If you are using ladder stands or hang-ons, then be sure to use a product like the HSS Lifeline so you are attached to the tree the entire time you are off the ground.

Here’s an additional tip once you get situated in the stand: place your safety harness tree strap high enough above you so that when you are sitting in your stand and start to lean forward, the tether on your harness gets taut. That way, even if you were to slip or fall asleep and take a tumble, you won’t have far to fall. In fact, you should easily be able to climb back into your stand.

Just Once Is Too Many

Have you ever gotten to your deer stand and realized you forgot something important? Maybe it was your release, or you ammunition. Maybe it was your safety harness. If that happens to you this season, either return to the house and get it or simply sit on the ground that hunt. It’s not worth the risk. There’s no way to know how many treestand accidents have been the result of a forgotten safety harness, but it’s probably not zero.

An old high school friend of mine made a similar mistake, but in his case it was a forgotten life jacket. Tony was a boat mechanic and was taking a boat he’d been working on to a local lake to test it out. He always wore his life jacket, but in his haste to get to the lake on a Friday afternoon, he’d forgotten it. Rather than making the drive back to the shop to retrieve it, he decided to go ahead and do without it this one time. That decision cost him his life. The boat had some type of steering malfunction at high speed and threw Tony from the boat. Two guys fishing nearby were rushing to get to him when he went under for the last time. Don’t take that risk in a treestand. Even if it’s “just this once.”

I don’t know if I’ll ever live to see a deer season without a single treestand-related fatality, but I certainly think it’s a worthy goal. And I believe it’s an attainable one. It just takes each of us doing our part, and our part is simply making sure we never climb a tree without being securely attached the entire time. While you’re out enjoying this deer season, do your part to keep treestand accident numbers low. You not only owe it to yourself, but also your friends and family who are counting on you to return home safe from every hunt.