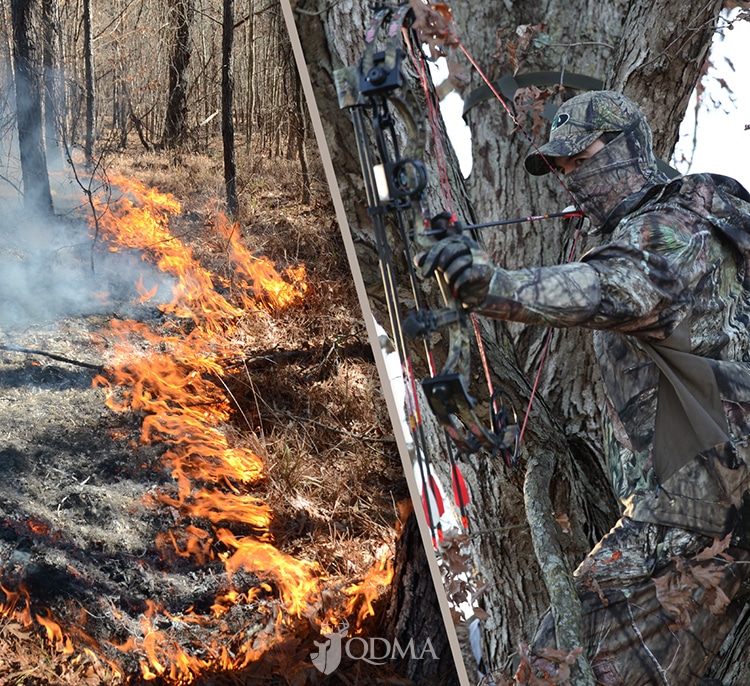 What is “bow-range burning”? It’s part of a concept that is torching a lot of old rules about the use of prescribed fire and shaking things up in the world of deer habitat management. How appropriate that it’s an idea conceived by a man who goes by @DrDisturbance on Twitter.

Dr. Marcus Lashley of Mississippi State University is the researcher, and the out-dated rules are these: That you must conduct prescribed fire in winter; that you must burn fairly large blocks on the order of tens or hundreds of acres at a time; and that fire helps produce cover and spring forage but isn’t really a tool that figures into your fall hunting strategy.

Marcus and his students have been studying the timing, location and size of prescribed burns, and their work led them to this amazing statistic: September micro-fires with a 30-yard radius and a bow stand placed in the middle produced 13 times more shot opportunities in October than bow stands where the woods had not been burned recently. The deer were attracted to feed on the high-quality sprouts of plants that were recovering from the earlier fire. Marcus revealed this finding publicly in his seminar at the QDMA National Convention in July, and it produced an excited murmur of talk in the audience and a furious scratching of pens and pencils on note pads.

Though burning in the growing season might seem shocking to some people, Mother Nature has been there and lit that. Summer and early fall are on average the driest period of the year, and it’s also when thunderstorms and lightning are most common. This combination of factors means that, historically, wild fire occurred much more often in summer than winter.

In studying growing-season fire, researchers have found a completely different effect on forest plant composition compared to dormant-season fire. Primarily, dormant-season fire won’t permanently kill plants that deer managers may be trying to get rid of in favor of deer forage.

“Those mid-story hardwoods that you don’t necessarily want: When we top-kill them with a warm-season burn, we kill more of them outright, and we can shift the plant community to forbs a little quicker,” said Marcus. “We have some study areas where dormant-season fire has been used on a three- or four-year rotation going on for 40 years or more, and they have just as many hardwoods in the understory as they did to begin with.”

For many plants that aren’t killed by warm-season fire, Marcus has recorded the nutritional value of their post-fire growth. On average, plants contain double the protein and triple the minerals, and are 20 to 25 times more preferred by deer, compared to levels measured before the fire.

“The ones that re-sprout provide a huge pulse of nutrients,” he said. “Because of the timing, that pulse can occur when antlers are growing and does are lactating to feed fawns.”

Deer may actually be adapted for growing-season fire: The pulse of nutrition that follows fire is more useful to them in summer when their physiological needs are greater and when natural forages, at least in the South, are normally at a low ebb in value.

Since giving his seminar in July, Marcus shared with me even newer data available from his work that now suggests the peak of the pulse of nutritional value for deer occurs approximately seven weeks after the fire. This means that if you want to maximize nutrition for fawns, does and bucks, the ideal timing for fire is about one to three weeks before the peak of the fawn drop in your area.

Of course, this suggestion is bound to be met by more than a few raised eyebrows, but Dr. Disturbance is not deterred.

“I know that sounds counterintuitive, but we’re not burning the whole world up,” he said. “We’re not burning an entire 150-acre block where fawns might be hiding, or burning up all the cover for fawns that haven’t arrived yet. You can burn an acre or two or three, or you can manipulate the shape of the burn area, but my point is the forage that’s being produced in that spot is unbelievably important. A fawn is way more likely to die of starvation if summer nutrition is lacking than it is from a few small fires. Having some small patches burned in a mosaic across a landscape, even if they’re only an acre, can help meet the nutritional requirements of a doe lactating for two fawns, and you’ve also covered the nutritional requirements for antler growth simultaneously.”

Marcus said you can and should also continue dormant-season fire. “Burn when you can,” were his words. But fear of burning during fawning season is not necessary if the size and distribution of fire is wise.

“Nature was lighting the woods on fire before we were,” he said. “Most of our plant communities, especially in the eastern United States, are fire-adapted communities, and most of the species that live in them are fire-adapted. So deer have been dealing with fire that occurs when they’re having their fawns far longer than they’ve been dealing with us. If that was a selective pressure, they would have changed the timing of when they had their fawns.”

Studying the nutritional value of plants after a growing-season fire, and seeing first-hand the response of deer to high-quality forage on the study sites, naturally led Marcus – a hunter himself – to think about hunting-season attraction. This led to the experiment where circular plots with a radius of 30 yards were burned in forested cover in late summer and then hunted during archery season. Researchers used backpack leaf blowers and hand tools to clear firebreaks at each stand site in hardwood forests, and then fire was set to crawl into a slow, steady wind.

At the Mississippi study sites, the fire was timed in September to produce peak forage attraction for bowhunting in October. In the far North, such timing would be impractical because frosts arrive earlier and would kill new growth, but local adjustments to the timing can be made based on the normal arrival of first frosts and the opening of archery seasons.

There’s a reason prescribed fire occurs traditionally in the dormant season: It’s more difficult to get a burn permit from your state forestry agency in the growing season because weather conditions are not as predictable and safe. All of the same planning, preparation and precautions should be followed whether you burn in summer or winter.

“The weather patterns are less stable in summer,” said Marcus. “With summer thunderstorms more likely, the wind is less predictable, so the forestry agencies are more cautious about giving the go-ahead.”

Effective prescribed fire depends on predictable wind directions and speeds, among other factors. When you’re trying to burn into the wind for a slow, “cool,” manageable fire, a sudden wind shift caused by an afternoon thunderstorm can be a problem.

Marcus said this is why he recommends burning small plots if you want to try warm-season fire. A circular “bow-range burn” with a radius of 30 yards equals 11,300 square feet, or a quarter of an acre. Given the right weather conditions and a good firebreak, it’s easy for a crew of three or four hunting buddies to safely light and control a fire unit of this size. Contact your state forestry agency early and discuss the likelihood of getting a permit around the time you plan to burn.

“We plant a one-acre food plot, why can’t we do prescribe fire on one acre?” said Marcus. “It’s the same idea, we’re just doing it with native plants a lot cheaper.”

Bonus: As Marcus pointed out, with bow-range burning, you know your deer is in range if it’s standing in the black!

For more information about this technique, we’ve included the MSU Deer Lab’s YouTube video above, and you can also listen to this full podcast episode on bow-range burning.