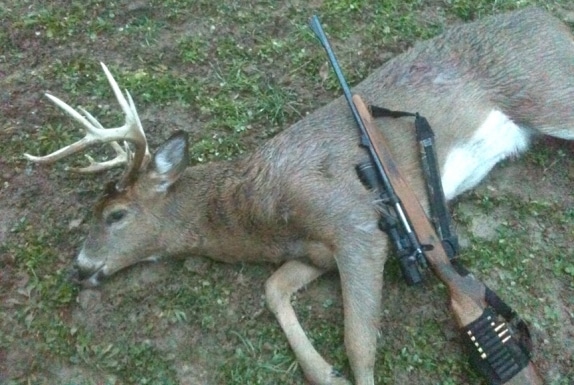 Some people are just plain lucky when it comes to finding shed whitetail antlers. Others spend countless hours walking the ground they hunt, only to come up empty-handed. Though I have found my share over the years, I shudder to think how many shed antlers I have probably walked by while working as a forester marking timber, spending most of my time looking UP for tree spacing, crown size and relative health,  rather than down at my feet!

If you are lucky enough to find a shed or two this spring, the following is an easy-to-follow recipe on how you can turn that exciting memento of bone into hunting success next fall.

First, every single shed you find, small or large, has one meaningful significance – that adult buck stayed alive long enough to drop his antler(s)! In the world of Quality Deer Management (QDM), where passing bucks is commonplace, the shed deer antler you hold before you is hard proof that at least one buck made it through the gauntlet we call hunting season.

We know that when photoperiod increases in late winter a process begins that reduces a buck’s daily production of testosterone, thus triggering antler casting. Some bucks shed early, and some shed late; but, generally speaking across North America, most bucks will shed their antlers after the end of regulated hunting season.  The good news is that research out of Pennsylvania shows if a deer survives hunting season it has a very high probability (60 to 90 percent) of being alive, available for harvest, the following year.  And, because that antler is hopefully found on a property that you hunt, you can be assured that if the buck in question did go on a rut-related excursion, he is safely back and should be there again come autumn.

Second, while it is exciting to find shed antlers, it’s best to not jeopardize the overall health of deer while doing so. For example, if you hunt in the North where deer gather in “yards” during winter, don’t be in too much of a hurry to go shed hunting. Yarding helps deer conserve energy in winter. If you bump them out of their yards, you force them to use limited energy resources that are difficult to recover while food is scarce, and you could accidentally increase winter death rates. If possible, wait until temperatures are rising and spring green-up is near. The last thing you want to do is disrupt deer that need to be conserving energy, or push them onto a property (where they may drop antlers) you don’t have access to.

Third, once Mother Nature gives you the green light to start looking, be strategic in your search for sheds. Start by going to areas that deer may be feeding during the winter. Many people immediately think of agricultural fields, food plots and the like, and that can work; but don’t forget that a deer’s diet primarily consists of hardwood and softwood browse and leftover hard mast (acorns, etc.) during the winter – so don’t leave out early successional areas like overgrown fields, powerlines, fresh clearcuts or oak-dominated forests. Next, concentrate your efforts in areas where deer were possibly bedding and riding out the winter during severe storms and temperatures. Typically, these areas consist of vegetation that offers thermoregulation properties. Where I live, snow can be deep and winter can be long, so that means dense mature coniferous cover. In other areas where coniferous trees are rare, look on southern facing slopes or shallow valleys near the aforementioned food sources. All of these areas should afford secure cover from wind, rain, snow and access to warmer temperatures.

Finally, be diligent in your record keeping and note taking. Meaning, if you find a shed from a large enough buck that it fits the property’s harvest standard, or is almost that big, and down the road you can’t remember where the shed was found, the year you found it, or have an idea where the buck it belongs to likes to hangout, you will have little chance to target that specific deer for harvest in the future. However, if you play detective and can start deciphering the clues left behind, the core area of that same buck will gradually come into focus. Though this may or may not give you the upper hand in terms of executing good stand placement and a fatal shot, at least you know where to concentrate your hunting efforts the following season.

To do so, here are my suggested steps to success:

1. When you do find a shed, note the location of it on an aerial photo or property map and take notes regarding the date, if you think it’s a “fresh” antler (grown that year or if its older), the dominant tree species in the immediate area, their relative age and density.

2. If you own a trail-camera and have accrued a number of buck photographs during the late summer or early fall from the same season/property, immediately start comparing the shed you found to your rolodex of possible candidates for a match. If you don’t own a trail-camera, go buy one and start putting it to use the following year to see if you can capture the same buck on film. But, first purchase Deer Cameras: The Science of Scouting to determine what type of features you may want in a trail-camera.

3. Once you have a match, attempt to identify this particular buck by other physical features (other than the antlers) that may be obvious, such as the overall coat coloration, distinct markings like the shape and size of his white throat patch and/or around the eyes, nose and up the back of the legs, the color black on the tail and chin, and anything else like scars, torn ears, blind eyes (no light reflected from the camera’s flash), etc.

4. Next, attempt to age the buck using the “Aging on the Hoof” method.

5. Then, start to look back in your trail-camera records from previous years to see if you can follow the same buck throughout his life. Antler symmetry and shape will help, but body markings are going to be critical to positively identify it as the same buck.

6. Separate any and all images of this individual buck from your trail-camera into its own “folder” on your computer. Then, scroll through those images and begin to look at the dates and location of the camera site(s) where he was photographed. Mark those spots on the same aerial or property map mentioned above. Also, note the dominant vegetative characteristics at each site, by date.

By doing this, you can then create an aerial map of where the buck has been on your property, when he was there and what his habitat preference may have been during a particular time of year. Hopefully, broad patterns will emerge. By drawing a circle around where he was photographed, his general home range will begin to take shape; and, if you have multiple photographs in a particular corner of your property, you may have zeroed in on his core area. You can even tie in any hunter observations of that same buck during season.

Deer are creatures of habit. If you observe or get a photograph of a buck feeding in a specific spot on your property during, say, the first week of archery season, all things being equal there’s a good chance he is in the same general vicinity the following year. By using the shed antler you found to positively identify a particular buck that frequents your property, and combining that information with trail-camera and/or hunter observations, it could be just the edge you need to connect with him the following year.

Good luck shed hunting this spring, and I hope you find its owner next fall!