Venison Backstrap Inside and Out: A Muscular Look at America’s Best Cut of Meat 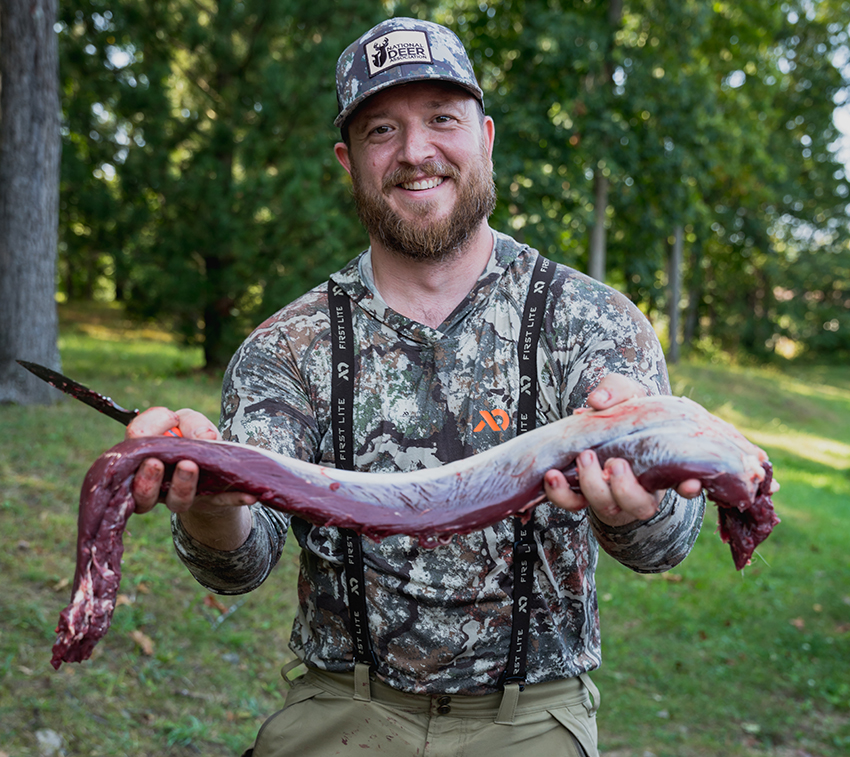 Evan Barrett of Michigan acquired his first backstrap from his first deer while hunting with NDA at a Field to Fork event in his home state. Photo by Marc Moline.

Venison backstrap. What more do I need to say? Most experienced deer hunters know where it is, what it looks like, and that we undoubtedly love to eat it. In fact, we’ll venture to say it is America’s most desirable cut of meat. But how much do you really know about the beloved backstrap? And for new hunters, what is backstrap and where is it located on a deer?

We can probably figure out on our own where the term backstrap comes from, as it is essentially a long “strap” of muscle that runs along a deer’s back. Still, there is often confusion about this prime cut of venison and other desirable cuts with similar names.

Although often used interchangeably, backstrap and tenderloin are not the same thing. This misnomer is an argument as old as time at many hunting camps, including my own, and backstrap is in fact the loin, but it is not the tenderloin. Backstraps are the large muscles that run parallel along both sides of a deer’s spine and rest on top of the ribcage, whereas the tenderloins are much smaller, and are located inside the abdominal cavity underneath the backstrap and the spine. As a comparison, think of backstrap as the ribeye in beef, and the tenderloins as filet mignon. 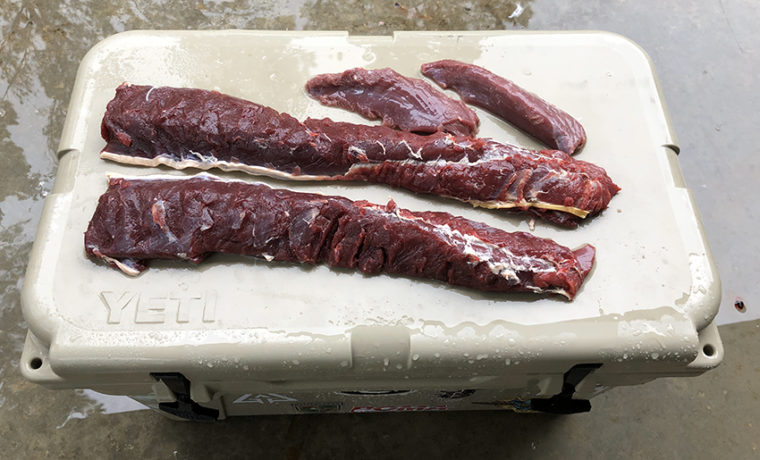 The two longest cuts in this photo are backstraps. The two smaller cuts are the tenderloins. These are the most desirable cuts of venison because of their tenderness, but their names are often confused. 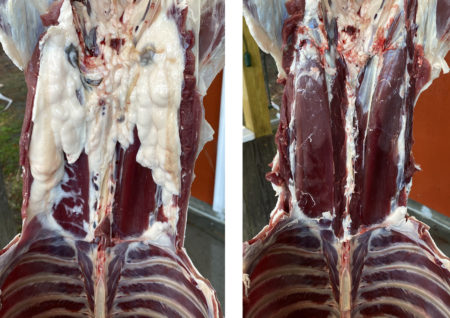 The tenderloins are smaller cuts that lie underneath the spine between the ribs and the pelvis, and they are easier to access from inside the body cavity after you have field-dressed the deer. On healthy deer, they are usually hidden by a layer of fat. This photo shows before (left) and after (right) the fat layer has been removed to expose the tenderloins.

This coveted cut belongs to a group of muscles called the Longissimus, meaning “longest one” in Latin. The parts that we consider “backstrap” can be broken down into three sections: the Longissimus capitis, Longissimus cervicis, and Longissimus dorsi, our favorite in the group. The Longissimus dorsi is the thick, tubular, lean muscle that we all know and love, and it extends from the shoulder blades all the way down to the lowest vertebrae. This is the longest and largest of the Longissimus muscles and is what we are generally referring to when we say “backstrap.”

The Longissimus is the largest of the three muscles that make up the erector spinae muscles, which are the set of muscles that strengthen and rotate the back. In humans, these muscles help us extend our spine, allowing us to bend backwards or to the side. In deer, although these particular muscles may aid in a deer’s ability to jump to incredible heights or reach zero-to-ridiculous speeds in a matter of seconds by providing stability and controlling movement, the backstrap really isn’t put to work all that much, which is why it is so tender. 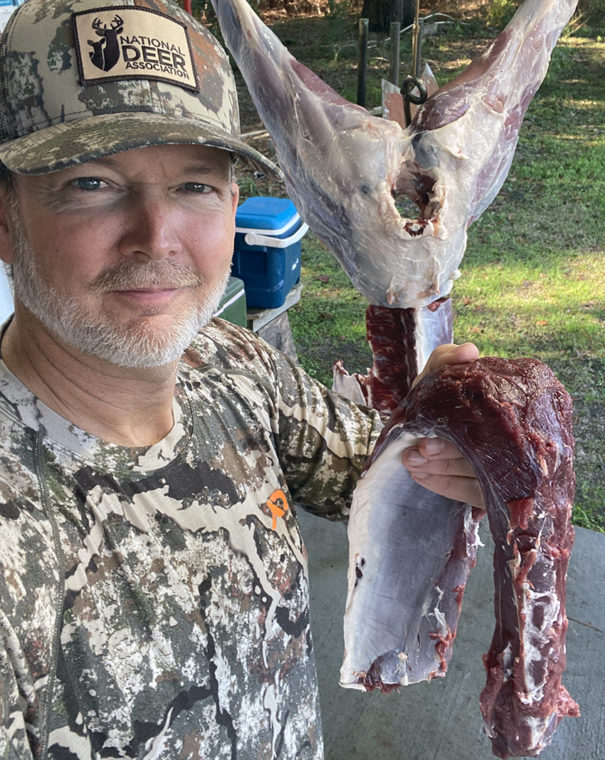 The backstraps lie on either side of the spine from the hindquarters to the shoulder blades and are easily removed with a sharp filet knife.

Backstraps are generally tender in animals like deer because these muscles do not constantly bear weight like a shoulder or a haunch. In fact, the majority of a deer’s athleticism comes from their powerful hindquarters, explaining why those cuts are less tender in comparison. The more a muscle is used, the tougher it becomes as the muscle fibers are broken down and rebuilt. Think of lifting weights. Every time you lift weights, your muscle fibers are broken down, and then rebuilt with protein and other amino acids, growing stronger and denser, therefore becoming tougher.

How Do I Remove the Backstrap?

Once you’ve harvested and skinned your deer, removing backstrap from the carcass is fairly quick and easy, since the backstrap is a solid exterior muscle running along either side of the spine, and backstrap does not have any internal bones. 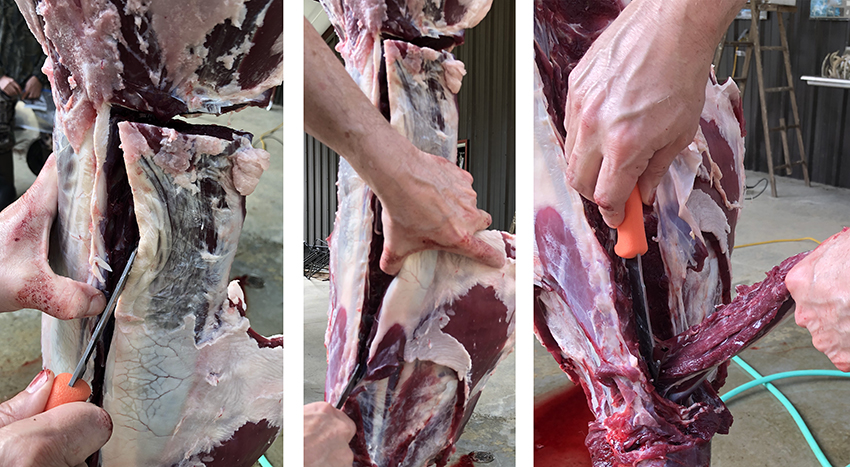 In the example, with the deer hanging head down, the backstrap is removed by starting with a horizontal cut at the junction of the spine and pelvis and then making a vertical cut down the spine, cutting slowly and carefully to remove the meat from the bone until you reach the base of the neck.

Since we’ve established where the backstrap is located, essentially all you need to do is insert your knife parallel to the backbone down to where the ribs meet the spine. Carefully lift away the backstrap as you slice along the ribs, delicately trimming the meat from the ribcage. Take your time and be sure to cut as close to the spine and ribs as you can to ensure you don’t leave any meat behind. To remove the ends of the backstrap from the carcass, simply make perpendicular cuts at each end of the meat to detach it. This may be hard to visualize, but luckily our friends over at MeatEater have put together a great instructional video on how to remove a backstrap.

Why Do We Love Backstrap?

That’s an easy question. We love it because of how tender, lean, and versatile it is. Wild game is one of the few protein sources that is truly free range, organic, and sustainable, making it the healthiest and most nutrient-dense meat available. According to the USDA, a 3.5-oz. portion of venison backstrap has 150 calories and only 2.4 grams of fat, compared to 205 calories and about 10 grams of fat in the same portion of beef loin. When it comes to protein, venison packs nearly 30 grams per 3.5-oz serving, while beef comes in just over 20 grams. Venison is also loaded with nutrients and minerals such as niacin, iron, potassium, zinc, and is a great source of B-vitamins. I can guarantee you that my portions are much larger than 3.5 ounces, but that sure is a lot of quality nourishment packed into a small piece. 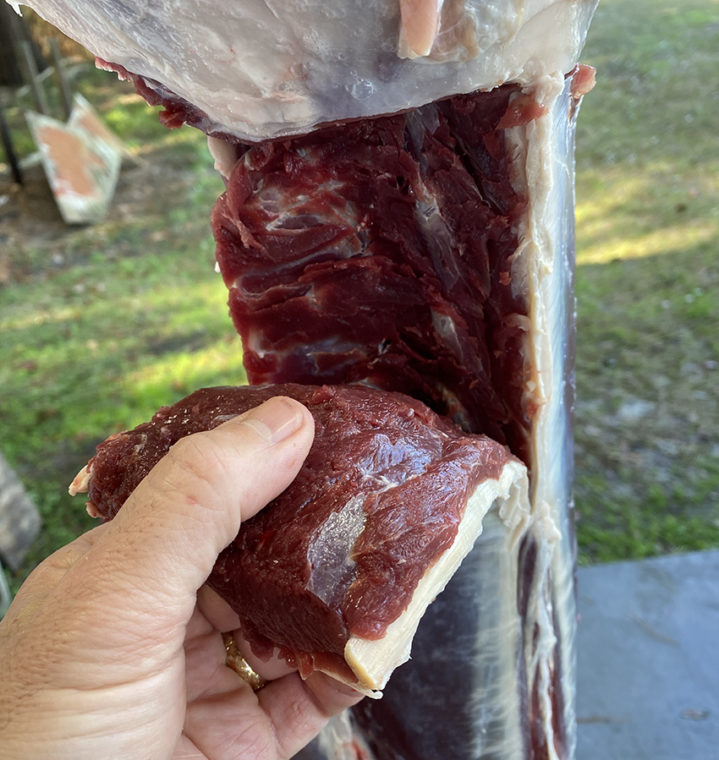 Backstrap is a large muscle, but it is not used constantly for weight bearing like the shoulders and hindquarters are. Thus, it is more tender.

I know that just about every hunter has their own secret backstrap recipe, and that most of us are very particular in how it is cooked. Regardless, I am always looking for new ways to enjoy venison, and I love experimenting with different dishes and cooking methods. Backstrap is extremely lean, flavorful, and easy to cook, making it the perfect cut to explore new recipes. I encourage you to try a brand-new recipe this year and share it with others who may have not yet experienced what this staple of our hunting culture has to offer and why it is so important to us.

Why is it Called “Venison”?

Before you go, did you know that the word “venison” derives form the Latin word venari, which means to hunt or pursue? The first version of the word entered the English language in the form of venaison, following the Norman Conquest of England in the 11th century, and was originally used to describe meat from any game animal killed by hunting, but over the years the word has evolved to refer specifically to members of the deer family. Feel free to use that to stump your buddies at deer camp.

Ben Westfall is NDA's Conservation Coordinator. Ben received both his bachelor of science and master of science degrees from Southeast Missouri State University with an emphasis on wildlife conservation.
View all Articles By Ben Westfall

There are many ways for you to get involved with the NDA to extend your deer-hunting knowledge, lead new hunters, connect with the nearest Branch at an upcoming banquet or field day, or help form a new Branch if one does not exist near you.