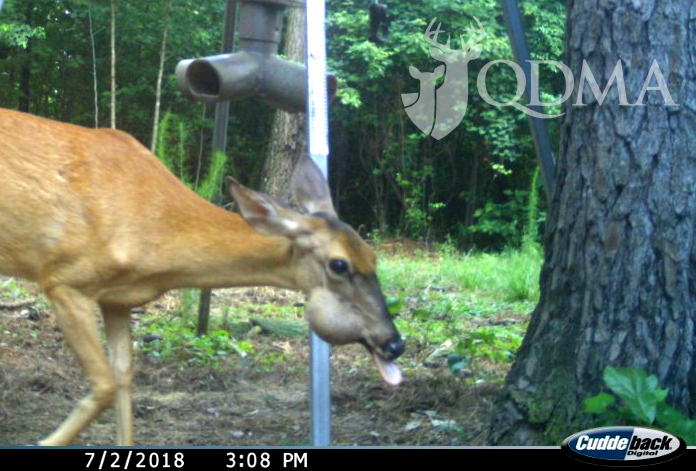 Grotesque facial swelling on a deer, known as a food impaction and sometimes also called “lumpy jaw,” is one of the weirdest sights a deer hunter can encounter on their trail-camera images or in person while hunting. QDMA is often asked about the cause of this condition, and since we recently received new photos from two different QDMA members, it’s a good time to review the facts about this strange affliction.

The photo above was captured in Alabama on July 2, 2018, by Palmer Yergey. He also got the photo below of the same doe on June 30. This doe is displaying a classic food impaction. What you see in these photos is a buildup of partially chewed forage caught in the pocket of the cheek and in the space beneath the deer’s tongue. Strangely enough, this condition is caused by an internal parasitic worm. 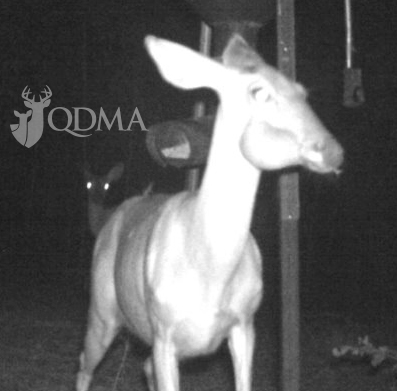 The parasite is named Elaeophora schneideri, but its alias, the “arterial worm,” is much easier to spell. It is called the arterial worm because the adult form of this nematode lives inside the arteries of its host. They tend to settle inside the carotid arteries, which are located in the neck and supply blood to the brain. By clogging these arteries, the worms affect blood flow to the facial muscles, thereby interfering with a deer’s ability to chew its food. Thus, poorly chewed forage begins to accumulate in the cheek and jaw pockets instead of being swallowed.

If you harvested a deer with a food impaction and sliced into the carotid arteries in the neck, you would likely find some number of adult arterial worms, which are noodle-like and usually 2½ to 5 inches in length.

Whitetails are apparently the only deer species that develop food impactions when they host arterial worms. Elk are more seriously impacted by this parasite and can develop blindness while their ears and parts of their muzzles may die and begin to rot, according to the Field Manual of Wildlife Diseases in the Southeastern United States. Mule deer and black-tailed deer also host the parasite but do not develop any symptoms at all.

Where Does the Parasite Come From?

Horseflies are vital to the worm’s life cycle. The larvae of the arterial worm are picked up by horseflies when they bite and feed on infected whitetails or other deer species. The larvae then mature in the horsefly in about two weeks and move back to the fly’s mouth, where they can be injected into new deer hosts when the horsefly feeds again. They mature and eventually migrate to the carotid arteries of the neck, and the cycle starts again. The parasites cannot be spread from deer to deer or through other routes that do not involve horseflies. 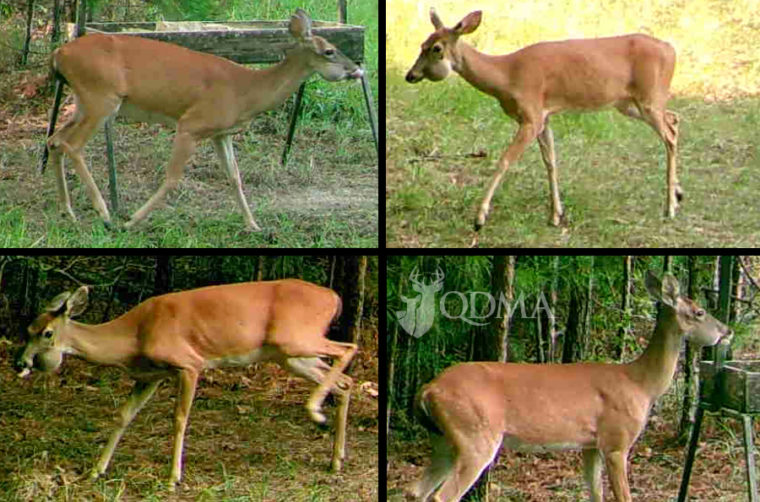 Cason Pyles got these photos of a Louisiana doe from August 10 to 13, 2018. This doe has a large food impaction on both sides of its mouth.

What Ultimately Happens to an Affected Deer?

Obviously, even deer with large food impactions are still able to swallow enough of their food to survive, since some hunters have witnessed deer over periods of months or years with food impactions. The deer in the photos on this page do not look like they are starving. It is likely that some deer recover and the food impaction fades away while others develop secondary problems. The food impaction itself can cause tooth decay, damage to the jawbone, secondary infections in the mouth, and sometimes the swollen skin can rupture as suspected in the case of an Alabama buck. When a deer’s skin is stretched to the unnatural extremes we see in these photos, I am sure it can be easily ruptured by accident. In severe cases, deer can also die from these secondary issues. The Field Manual states that infection leads to “occasional mortality” in whitetails. Overall, the parasite is rare in whitetail populations.

Should You Kill the Deer?

Killing any deer that has a food impaction is not likely to measurably reduce the rate of future infections in a whitetail population. By the time most hunting seasons open, it’s usually too late in the year to interrupt the life cycle of the parasite. Some deer recover from the condition, but if you see a deer that has clearly been severely weakened and sickened by this condition and is unlikely to survive much longer, use your own judgement to decide whether to use a tag to put it down. Follow local seasons and bag limits in any case. Overall, the infection rate is very low and usually not a concern for deer at the population level.

Should You Eat the Deer?

Though arterial worms cannot infect people in any way, it is probably not a good idea to eat venison from a deer that had a serious food impaction. Secondary infections often develop around the pocket of decaying food, and such infections can lead to bacteria in the blood stream. QDMA does not recommend you eat any deer that was obviously sick or behaving abnormally when it was harvested.