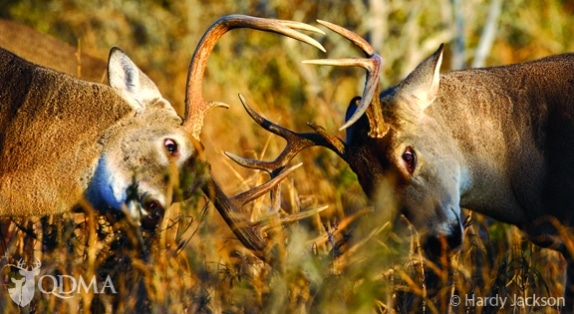 A buck can vanish from your hunting area for many reasons: hunting pressure, killed by a neighbor or poacher, hit by a car, died from injuries in a fight with another buck, brain abscess, a long list of freak accidents, and more. Let’s list a factor you don’t have to worry about: Being chased out of its home range by a more aggressive buck. There’s rock-solid science on this one. Whitetail bucks are not territorial.

A territory, in the biological sense, is a space that one animal defends against invasion by other animals – usually animals of their own species, but sometimes other species as well. Whitetail bucks settle into what are called “home ranges,” but there is zero evidence that they defend them against other bucks. The opposite is true: there is abundant evidence that buck home ranges overlap, and that deer within those overlapping home ranges share very close quarters at times, even in fall when they are not in bachelor groups.

Let’s look at just one example. The map below is from research conducted in South Carolina by Clint McCoy, who was earning his Ph.D. in wildlife science at Auburn University when he did the study. It shows the core areas of four adult bucks that were being tracked by GPS collars they were wearing (there’s a yellow, green, red and blue buck in this map). Note that the core areas of all four bucks overlap with other bucks to some extent, in some cases greatly. In fact, the blue, green and red bucks all shared a good bit of ground for their core areas. And this was during hunting season. 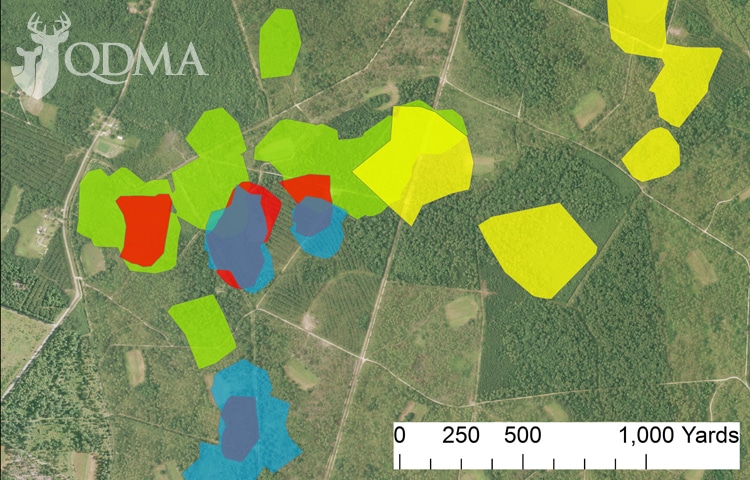 Clint and other scientists tracking bucks like this define “core area” as the space within a larger home range where a deer spends 50 percent of its time. So, the colored areas on this map are not home ranges – they are the hearts of the home ranges. And yet, these bucks shared that turf regularly.

In other studies, multiple mature bucks wearing GPS collars have been seen sharing the same general area, even the same bedding area, and even outside of summer when bachelor groups are broken up.

“You didn’t change schools to avoid the bully. You just picked a different corner of the lunchroom or ate your lunch at a different time. Bucks operate the same way.”

Bucks do not draw lines around their home ranges or core areas and dare other bucks to cross them. But they will pull rank to displace each other from small areas like feeders, a loaded persimmon tree, an estrus doe, or even just their personal space. Many of us have witnessed this happen while hunting, while glassing fields in summer, or while looking at trail-camera photos. Posturing plays a large role in settling these disputes, though sometimes it gets more serious, as with the two bucks shown above. The dominant buck usually gets first dibs of the desired resource, but the subordinate buck does not pack up and move to a new neighborhood. He doesn’t abandon his home range. He continues to use his familiar ground, though he may adjust his travel schedule. He’ll sneak back later to that feeder, persimmon tree, or hot doe, and get what he can while more dominant bucks are busy elsewhere.

Chase Currie, a deer researcher and NDA member from Texas, summed it up well with an analogy about high school. You didn’t change schools to avoid the bully, Chase told me. You just picked a different corner of the lunchroom, or ate your lunch at a different time. Bucks operate the same way.

This would really just be a boring vocabulary discussion except for one thing: I hear some people advocating management decisions based on a misguided belief that bucks are territorial. They witness one buck dominating another one and jump to the conclusion that the lesser buck will now disappear. Or, a good buck vanishes from their trail-cameras at the same time a different buck shows up. There are numerous well-documented behaviors, like seasonal core-area shifts, excursions, and other “happenstance” that could also explain the disappearance of a buck that was once easy to see, or the sudden appearance of a new buck. But some people conclude that the second buck must be a bully and should be shot as such.

Herd management is not that complicated. Bucks are individuals and certainly have unique “personalities,” from reclusive, subordinate types to outgoing, aggressive types. But we can’t accurately measure, much less manage, buck personalities – just like we can’t manage buck genetics. Nevertheless, just like genetics, buck attitude is sometimes used as an excuse to justify the killing of a buck the hunter just wanted to take home with them.

So we come back to the basics: If the buck would make you happy, and it’s legal under your local regulations, take him home with you. Quality Deer Management is a gradual process in which hunters enjoy stages of success, taking progressively older bucks, rather than passing deer that would make them happy because they’ve set their goals too high. When you set a realistic age-based goal for buck harvest, your harvest decisions become simple. The only consideration is whether the buck meets your age criteria.

Often, hunters worry about older, low-scoring bucks being bullies. There’s no need to dress him up in some imaginary costume of “bad genetics” or “bully” or “management buck” or “cull.” He’s fully mature. He’s a crop ready for picking. Take him to the skinning shed if you are fortunate enough to get the chance, and then collect the ultimate certificate of whitetail hunting achievement: a jaw full of worn teeth.