Why Does That Deer Look So Raggedy? 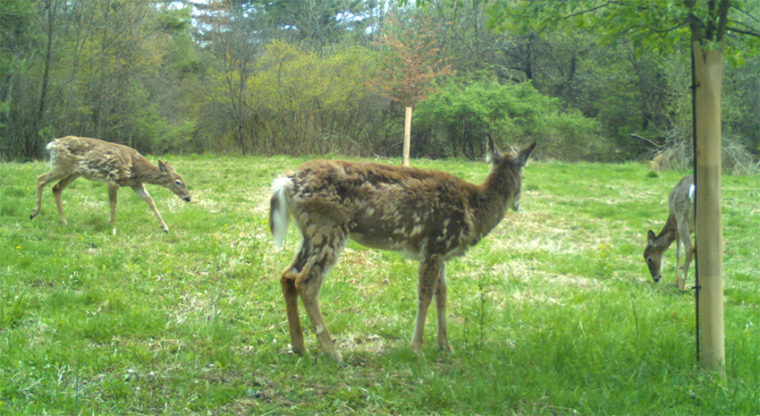 Many concerned sportsmen and women report “unhealthy” or raggedy looking deer in the spring because they see or get trail-camera images of deer with notable hair loss. A common misunderstanding is that these deer have something wrong with them like mange, an injury, or even some kind of disease. Often, the simple truth of the matter is that whitetail’s grow two coats annually: a summer reddish coat and a winter brownish-gray coat. It is the red summer coat replacing the darker winter coat during the months of late March, April and May that often appears to be an injury or affliction on an otherwise normal-looking deer.

The length of daylight in a 24-hour period (known as photoperiod) largely controls timing of deer coat growth and shedding. Whitetails shift from well-insulated coats to heat-shedding outerwear as the seasons change. This shedding of hair, or molting, usually begins on the head of the deer and progresses downward, with the hind legs being the last to shed. The entire process occurs in just a few weeks, but the timing and the rate of molting can be affected by the condition of the deer. Deer in good condition tend to molt earlier and faster than deer in poor condition.

The summer coat begins growing in April in most locations and is made up of thin, reddish-brown hair. This coat is only 0.04 to 0.18 inches deep. The coloration gives deer their red or rust appearance during summer, and the thin coat allows for maximum heat loss.

Whitetails actually begin shedding this summer coat in August and September, with bucks and non-lactating does (those without fawns) typically shedding earlier than lactating does and fawns. Why is this? Shedding this coat and replacing it with a winter coat requires energy and protein, and bucks and does without fawns have more to spare than does that are producing milk and fawns that are growing as much as possible before winter. 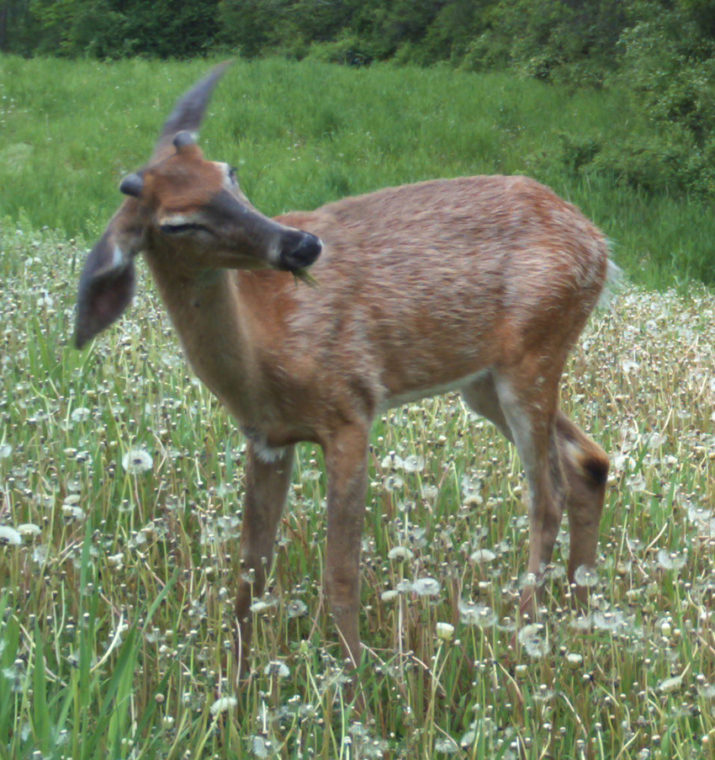 It’s May 24 in this photo, and this buck has mostly shed his gray winter coat.

Winter coats replace the short, reddish hair with longer, brownish-gray hair. Winter coats have important thermoregulatory qualities and allow deer to survive northern winters. Winter coats can range from 0.2 to 1.1 inches deep; this is 5 to 6 times deeper than summer coats! Hair depth is critical for survival because deeper coats trap more insulating air. This is like wearing a heavy down jacket versus a satin windbreaker. A whitetail’s winter coat also contains long guard hairs and short underfur, and the hairs have hollow shafts that trap air. This combination insulates deer so well that snow can ride on a deer’s back without melting from body heat. 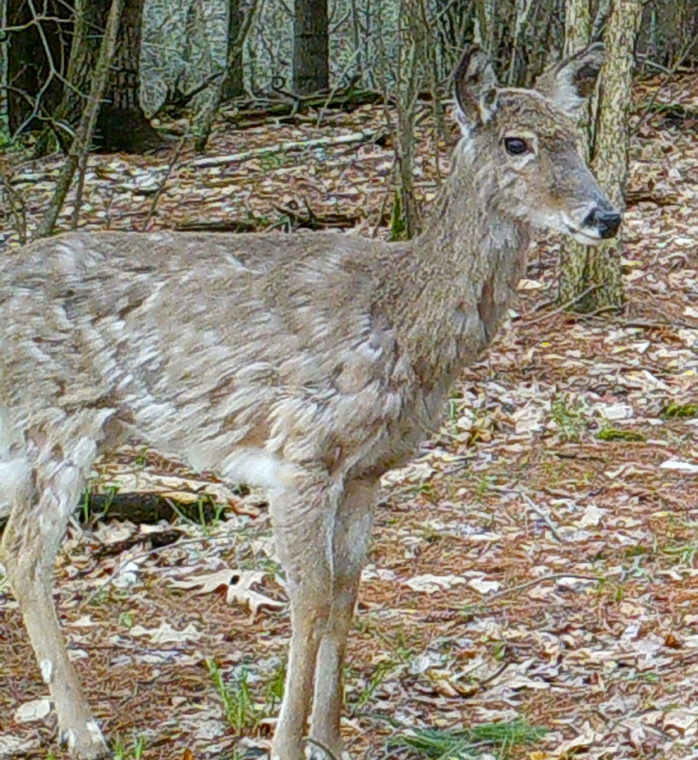 May 3: This doe is just beginning to lose its heavy winter coat, and small patches of the lighter summer coat are starting to show.

Aaron Moen, a retired Cornell University researcher, estimated a 140-lb. buck’s winter coat of hair would weigh about 2.8 pounds, and a fawn’s would weigh about 1.7 pounds. That may not sound like much, but think about how much hair it takes to reach those weights. The answer is – a lot.

Though most raggedy looking deer are just molting, deer can actually get mange. The cause is a species of mite (Demodex odocoilei) that is unique to whitetails. It is not the same species that causes mange in other mammals. Signs of deer mange include hair loss in small or large patches, especially the head, neck and shoulders. Thickening of the skin causes it to look abnormally wrinkled or droopy, as seen in the photos below taken in August 2016 by Brenda Valentine of Tennessee. 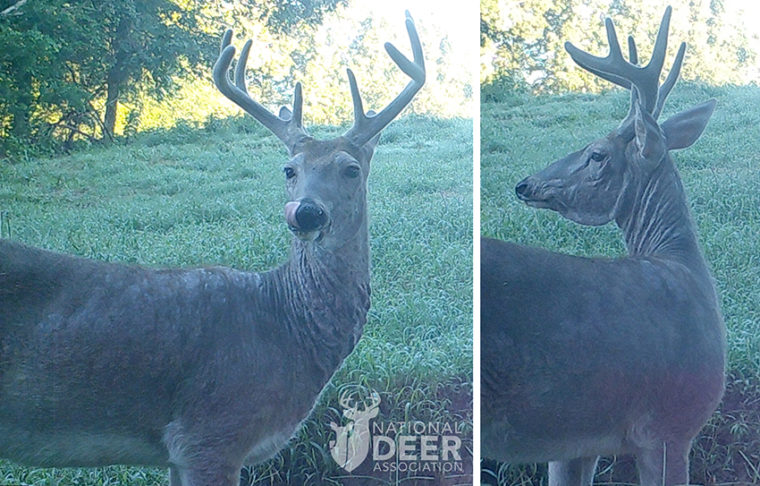 Deer mange is very uncommon and affects certain individual deer but not entire herds. No known case has been reported of a deer dying from mange. Most deer soon recover, and removing a deer simply because it has mange is unlikely to prevent future occurrences. Mange is a skin condition, and the parasite does not affect venison quality. However, in a severe case when the deer has additional health problems, infection can set in. Never eat any deer that appeared sick or behaved strangely before you shot it.

Even though the molting process for deer may be unsightly, most of the time it is just a normal process in the changing of seasons. If a deer does indeed appear to be sick, report it immediately to your state wildlife agency. Rapid reporting of sick deer is critical in case it is something more serious like CWD. If we all do our part, we can help the NDA in the fight to prevent CWD from becoming established in a new area if it is discovered quickly enough. 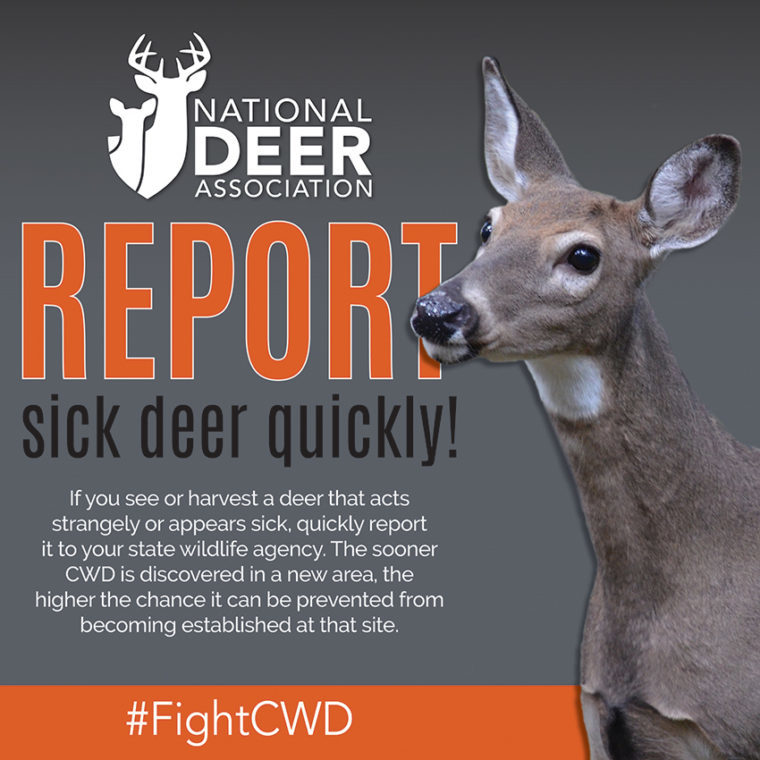