Why We Don’t Recommend Antler Traps 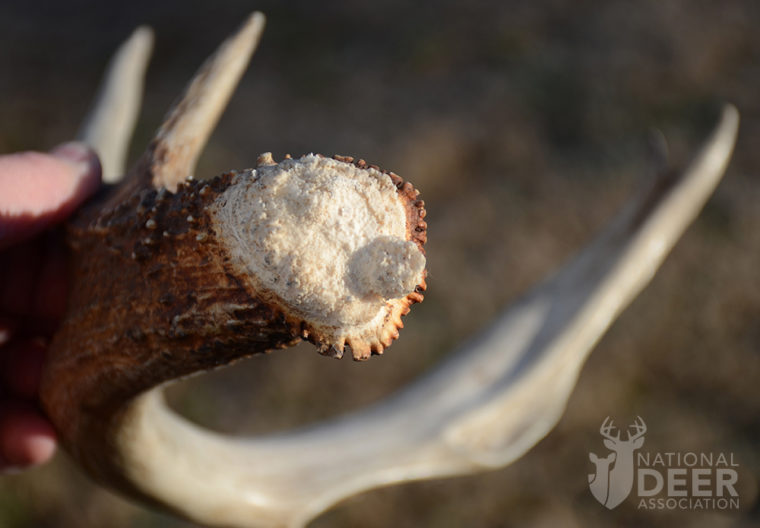 It’s the time of year when bucks are beginning to shed their antlers and hunters are beginning to grow impatient to go hunt those shed antlers. And every year as talk of shed hunting begins, we also encounter hunters who just don’t have much patience and want the bucks to bring the sheds to them. They devise what are known as “antler traps” — devices designed to snare and pull off the antlers of bucks attracted to a feed source.

I’m not here to tell you how to design an antler trap. In fact, I’m here to discourage it. NDA does not recommend the use of shed antler traps, and here are our reasons.

With antler traps, there’s an increased risk that part of the antler pedicle (the base from which antlers grow) will break off with the antler, as happened with the shed seen above.

Antlers shed when buck testosterone levels drop and trigger the connective layer between antler and skull to dissolve. Sometimes, antlers fall or break off before this layer has completely dissolved, and a portion of the antler pedicle also breaks off with the shed. If you’ve ever found a shed antler with a little spike of extra bone at the base, you’ve seen the results. Researcher Dr. Gabe Karns, who has studied the causes of abnormal antlers, calls these “dirty sheds.” Gabe has found a link between “dirty sheds” and abnormal antlers. When portions of the antler pedicle or skull break off with a shed antler, next year’s antler on that side is very likely to be deformed. 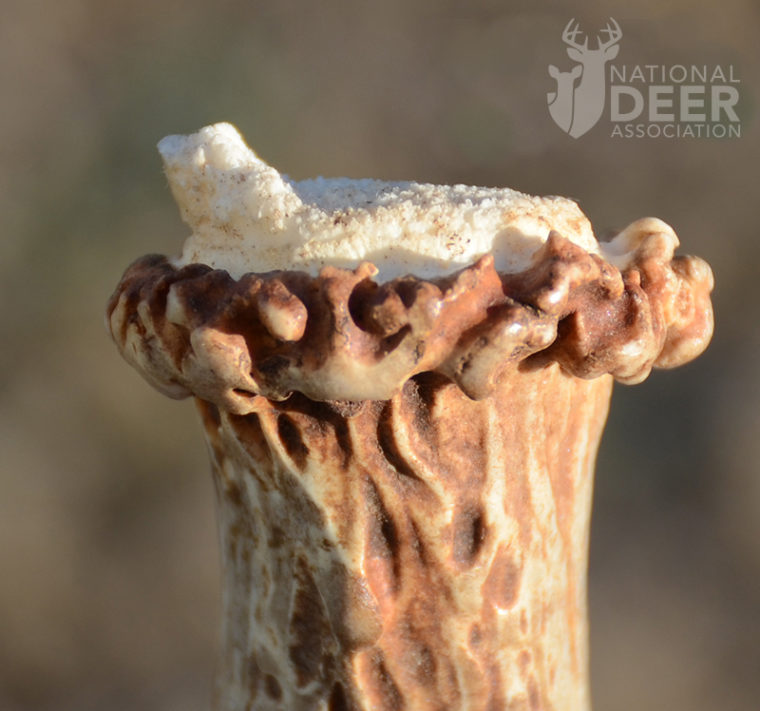 This antler did not shed cleanly, and a small piece of the antler pedicle came off with it. This will likely lead to abnormal antler growth the following year and possibly a cranial infection.

There also may be a link between “dirty sheds” and brain abscesses in bucks. In some cases the damaged area of the pedicle, which is essentially an open wound for a short time, can become infected with bacteria that are naturally present on a deer’s skin, and the result can be a fatal brain abscess.

When a buck sticks his head in a bait pile and snags his antlers on wire, fencing, ropes, bungee cords, or whatever material is used in the shed-antler trap – especially at a time when the connective layer is partially but not fully dissolved – there’s an increased possibility that antlers will be prematurely pulled off and that part of the pedicle will break off as well.

This alone is reason enough not to construct antler traps. But there are other less critical reasons.

Added Stress at a Stressful Time of Year

I’ve seen some trap styles that could easily tangle a buck that isn’t ready to shed. Bucks get tangled in ropes and other trash people have thrown in the woods even when the people didn’t intend to snag a buck! I’m sure the few bucks that get tangled will escape antler traps after a struggle, but the stress of such a struggle would be hard on a deer that is already under stress from weather, post-rut fatigue, and winter’s limited food supply. Conserving limited fat stores and energy supplies is the key to winter survival for deer. In a tough winter, the fight to escape entanglement in an antler trap could make the difference.

Missing the Advantages of Shed Hunting

Antler traps put all the value on possessing the bone. How and where you find it doesn’t matter as long as you get the antler and add it to your collection. Personally, I get a lot of value out of hunting for shed antlers. It’s fun and challenging. I also notice a lot of other things about my hunting area while I’m out there, such as rubs, trails, bedding cover, or food sources like oaks or fruit trees I didn’t know about. I find things like deer that died of unknown causes and signs of trespassing. I pick up all of this valuable “intel” and more while hunting sheds.

There’s also information in where you find the shed antler. It’s another piece in that big puzzle of buck movements that we’re always trying to assemble. Concentrations of shed antlers in specific areas in one year, or across years, is valuable information. But if the buck is drawn to an antler trap by corn, you learn little about the buck’s natural movements.

It’s Illegal in Some States

There are a few states – Virginia and Kentucky are two of them – that have outlawed antler traps. I don’t have a comprehensive list of them, but it doesn’t really matter. Just assume it’s all of them. Even where they are not specifically outlawed, we still don’t recommend them for the reasons listed above.

If you want to trap something: Coyotes. Meanwhile let the bucks drop their antlers when it’s time, and enjoy all the benefits of getting outdoors and searching for them.