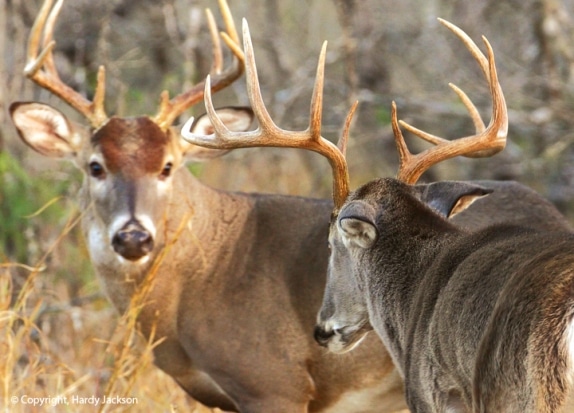 “Do a handful of bucks sire the majority of the fawns?”

This question is often followed with a series of questions, such as:

“If the dominant buck in my area has narrow antlers, will I start seeing more narrow-antlered bucks?”

“If someone shoots the dominant buck early in the season will it upset the rut?”

“If I have the same dominant buck for many years, will I have problems with inbreeding?”

These are all valid questions and ones I am sure most hunters have heard or thought about at some point. The premise behind these questions is the belief that a small number of dominant bucks breed the majority of does and thus sire the majority of fawns.

Biologists used to think large mature bucks dominated the breeding in deer herds similar to the way bull elk do. The idea was the largest individuals successfully defended all receptive does (does that are in estrous and ready to breed) from other would-be suitors. This idea seemed plausible, and it wasn’t until the advent of genetic testing that paternity assessments could be done. Research during the past few years has revealed a much different picture of what actually happens in the whitetail’s breeding world.

White-tailed deer have a different breeding ecology than elk. Elk form harems of cows that are guarded and bred by a single bull. The identity of the specific bull may change during the breeding season, but the individual bull in charge at the time when cows are receptive gets to breed the entire harem. This strategy allows a small number of bulls to breed a large number of cows.

Whitetails don’t form harems. Instead, bucks search for individually receptive does. It is not uncommon for a buck to court a doe for up to a day prior to her being receptive and then breed her repeatedly during the 24 to 36 hours she is in estrous. The buck then searches for another doe and repeats the process. Therefore, bucks that successfully breed may spend as much as 24 to 48 hours with a single doe before looking for another. Due to the time spent with an individual doe and because the majority of does in a balanced population are bred over a relatively short time frame, this strategy doesn’t allow bucks to monopolize the breeding.

Dr. Randy DeYoung’s article in Quality Whitetails explained this concept and documented through research that breeding is done by bucks of all age classes, irrespective of the herd’s age structure. Yearlings and 2½-year-olds even get in on the action on the King Ranch in Texas, where more than 50 percent of the bucks are 3½ years of age or older. Randy’s research also showed bucks that successfully breed do not sire many fawns. The most prolific buck in their studies only sired six fawns in a single year, and on one study site successful bucks averaged less than three fawns per year over an 11-year period. Anna Bess Sorin found similar results in a Michigan deer herd where 17 bucks sired 67 fawns for an average of 3.9 fawns per buck. Individual bucks sired anywhere from one to nine fawns in her study.

Dominant bucks don’t monopolize the breeding, and they don’t even sire all of the fawns from each doe they breed. Black bear biologists have known for years that a litter of cubs could easily have more than one father, but multiple paternity in whitetails is relatively new information. Randy and his colleagues were the first to report on this. Their study of captive deer revealed multiple paternity occurred in about 24 percent of compound litters. Approximately one in four sets of twins or triplets had two fathers! This means does are breeding with multiple bucks, which further clarifies that individual whitetail bucks do not monopolize breeding.

Anna Bess then documented the first cases of multiple paternity in free-ranging whitetails. She reported multiple paternity in 22 percent of twins, a percentage similar to Randy’s findings. She also noted bucks that jointly sired twins appeared to be at least one year apart in age (A word of caution, though: these deer  were aged using tooth-wear criteria. Recent research suggests this technique can have an error factor of plus or minus at least one year for older age classes).

There are several explanations for the joint siring. Remember, bucks will repeatedly breed does during the 24 to 36 hours they are in estrous. It is plausible in cases of multiple paternity that a buck breeds a receptive doe and then gets displaced or run off by a larger, older or more aggressive buck while the doe is still receptive. The larger/older/more aggressive buck then breeds the doe, and the doe can have fawns sired by each of the bucks. The initial breeder may have been a young buck who was in the right place at the right time before getting displaced by an older buck, or he may have been the most dominant buck in the area but was “run down” from prior breeding activity and was displaced by a more aggressive animal. It is also possible for the doe to breed with other bucks. Behavioral observations and genetic studies clearly show all breeding sequences do not result in conception.

So where does this leave you and your management program? You need to recognize bucks of all age classes will breed does. This is good because it ensures genetic diversity and fitness. As long as adult sex ratios are relatively balanced, it also ensures most does are bred during their first estrous cycle. This timing is crucial to ensure that fawns will be born during optimal fawning dates the following spring – when natural forages for the nursing doe and the weaning fawn are abundant, and fawns have more time to grow before the onset of winter.

This doesn’t mean you can’t intensify the rutting activity in your area or minimize the number of does bred by young bucks. Older bucks generally make more rubs and scrapes, engage in more fights and increase the overall rutting activity in an area. These can all enhance the quality of your hunting experience. Fortunately, Randy’s and Anna Bess’s research also revealed that even though young bucks do some of the breeding, mature bucks do most of it in populations with good age structure. Their research showed bucks 3½ years of age and older sired 70 and 85 percent of fawns, respectively, in populations with reasonable age structure and sex ratios. Thus, all yearlings and 2½-year-olds collectively only sired 15 to 30 percent of the fawns. This is much better than when yearlings and 2½-year-olds comprise 80 to 90 percent of the buck population, such as under many traditional deer management programs, and would thus sire nearly all fawns. The physical and nutritional stress of actively participating in the rut no doubt has an impact on the health and future development of these immature bucks. Also, does appear to select mates based at least partially on age – older does tend to select older mates. If older bucks are not available, older does may spend more time unsuccessfully wandering and searching for them. They will breed with younger bucks but it is typically later in the fall.

So, is a dominant narrow-antlered buck going to create an abundance of narrow-antlered bucks in your area? Breeding strategy suggests not. Plus, about 50 to 75 percent of yearling bucks disperse 1 to 5 miles from their birth range. So, unless you control several thousand acres, many of the bucks born on your area end up somewhere else. If a dominant buck is taken early in the season or lasts several seasons, does this spell trouble for the herd? Again, breeding strategy suggests not. As managers we can’t control or even predict which bucks breed which does in the wild. Fortunately, deer evolved with a breeding ecology flexible enough to withstand the results of poor management on our part. That same breeding ecology produces exceptional results when we manage the deer herd wisely. Wise management includes a balanced adult sex ratio and a complete age structure for bucks and does. Passing young bucks is a great way to ensure there are bucks in all age classes, and even though mature bucks don’t breed all of the does, they do breed the majority of them.