What is Wrong With This Strange Buck? 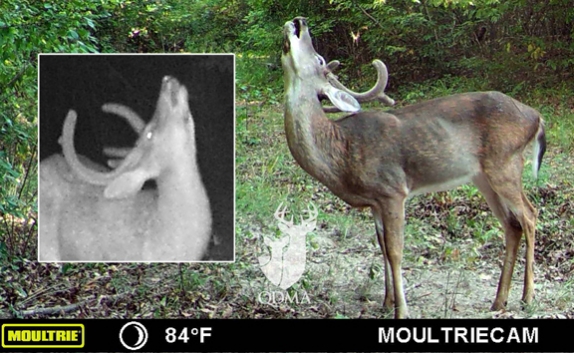 We’ve received photos of some extremely weird deer at QDMA, but the ones I got this week from my friend Ryan Basinger in Alabama deserve a place in the Hall of Strange. Here was a buck with his head thrown back and mouth open in a wolf-like howling pose, in photo after photo. What is this buck doing? Is his head frozen that way?

Here, see for yourself:

Immediately, I picked up the phone and called Ryan, who is a wildlife biologist with Westervelt Wildlife Services in Alabama, and he writes the Food Plot Species Profiles in Quality Whitetails magazine and on this website. With a little more information and more photos, Ryan explained what is going on. Photos of the buck with its head down, feeding on corn, are followed by the strange “howling.” Apparently, the buck has to raise its head to swallow. The behavior is seen over and over, in dozens of images captured across five days, September 14 to 18, on a camera run by Rolfe Singleton, a Westervelt forester. 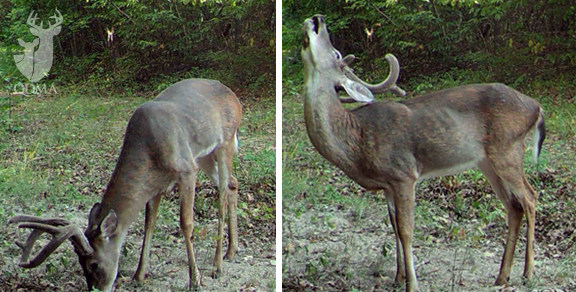 So, what is wrong with this buck? Ryan’s theory is this: The buck had a food impaction in its jaw that became infected, ruptured, and drained, leaving the wound that is clearly visible beneath the buck’s jaw. Damage from the infection, or the effects of the parasites that caused the food impaction to begin with, is preventing the buck from swallowing normally.

Food impactions in deer are caused by arterial worms, a rare parasite whose adult form lives in the carotid arteries of a deer’s neck. When enough worms are present, they can reduce blood flow to the muscles of the jaw, interfering with chewing and swallowing, so food collects in the cheek or under the tongue. Where it rots. Yes, this can get nasty, and it can lead to secondary infection in the jaw or mouth. Ryan said he has seen several cases where a deer had a food impaction that eventually ruptured, leaving a hole. If that’s what happened to this buck, then the damage from the impaction may be preventing normal chewing or swallowing, or it may be the original cause: impaired ability to chew and swallow due to decreased blood flow to the muscles of the mouth and face.

Ryan doesn’t know this for certain. The visible wound on the buck’s mouth and jaw could have been caused by something else. Prior to putting this camera up on September 14, Rolfe had never seen this buck before, so we don’t know if it previously had an actual food impaction. However, to support his theory, Ryan sent photos of a buck named – for obvious reasons – “Red Man.” In fall 2013, Red Man displayed a large food impaction. By 2014, photos showed a hole appearing in the skin surrounding the impacted food. A couple of these 2014 photos are shown below. In the one on the right, you can even see food falling through the hole. 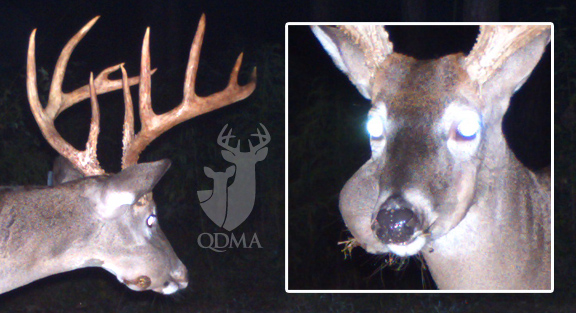 “Red Man was very active on the property. You could get his picture any time and he was very visible during hunting season,” said Ryan. “However, the last account we have of him were the photos from the 2014 camera survey in early October, so I suspect he died shortly after the survey period.”

For a look at a dead deer with a food impaction that has been opened, click here.

Whatever the cause, this new buck is managing to eat the only way it can. The strategy must be working, since the buck keeps doing it, and since the buck managed to survive through the five days this camera was operating. But the buck is not in the best of health. That’s plain to see from the jutting hip bones, thin neck and visible ribs. Will it survive and recover? Or, if it isn’t caught by a predator first, slowly weaken and die? No way to know for sure, but I wouldn’t blame the hunter who chooses to call “mercy” and put this deer down, given a legal opportunity.

Once again, I find myself astounded by the whitetail’s ability to adapt, cope and survive, as individuals and as a species.